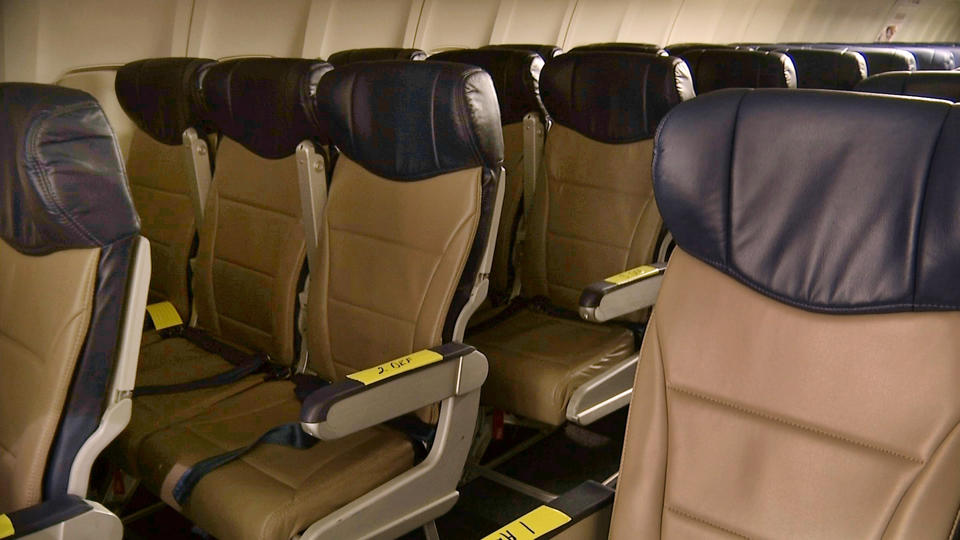 Squeezed into tighter and tighter spaces, airline passengers appear to be rebelling, taking their frustrations out on other fliers.

Three U.S. flights made unscheduled landings in the past eight days after passengers got into fights over the ability to recline their seats. Disputes over a tiny bit of personal space might seem petty, but for passengers whose knees are already banging into tray tables, every inch counts.

“Seats are getting closer together,” says Sara Nelson, President of the Association of Flight Attendants, which represents 60,000 flight attendants at 19 airlines. “We have to de-escalate conflict all the time.”

There are fights over overhead bin space, legroom and where to put winter coats.

“We haven’t hit the end of it,” Nelson says. “The conditions continue to march in a direction that will lead to more and more conflict.”

Airlines today are juggling terror warnings in Britain, the Ebola outbreak in Africa and an Icelandic volcano erupting and threatening to close down European airspace. Yet the issue of disruptive passengers has captured the world’s attention.

It’s getting to the point where the pre-flight safety videos need an additional warning: Be nice to your neighbor.

The International Air Transport Association calls unruly passengers “an escalating problem,” saying there was one incident for every 1,300 flights in the past three years. The trade group would not share detailed historical data to back up the assertion that this is a growing problem.

Today’s flying experience is far from glamorous. Passengers wait in long lines for security screening, push and shove at the gate to be first on board, and then fight for the limited overhead bin space. They are already agitated by the time they arrive at their row and see how cramped it is.

To boost their profits, airlines have been adding more rows of seats to planes in the past few years.

Southwest and United both took away one inch from each row on certain jets to make room for six more seats. American is increasing the number of seats on its Boeing 737-800s from 150 to 160. Delta installed new, smaller toilets in its 737-900s, enabling it to squeeze in an extra four seats. And to make room for a first-class cabin with lie-flat beds on its transcontinental flights, JetBlue reduced the distance between coach seats by one inch.

Airlines say passengers won’t notice because the seats are being redesigned to create a sense of more space. Southwest’s seats have thinner seatback magazine pockets, Alaska Airlines shrank the size of tray tables, and United moved the magazine pocket, getting it away from passengers’ knees.

Airlines have sold 84 percent of their seats on domestic flights so far this year, up from 81 percent five years ago and 74 percent a decade ago, according to the Bureau of Transportation Statistics. That means there are fewer and fewer empty middle seats on which passengers can spread out.

The latest spate of passenger problems started Aug. 24, when a man on a United flight prevented the woman in front of him from reclining thanks to a $21.95 gadget called the Knee Defender. It attaches to a passenger’s tray table and prevents the person in front from reclining. A flight attendant told the man to remove the device. He refused, and the passenger one row forward dumped a cup of water on him.

Three days later, on an American flight from Miami to Paris, two passengers got into a fight, again over a reclining seat, and the plane was diverted to Boston.

Then, on Monday night, on a Delta flight from New York to West Palm Beach, Florida, a woman resting her head on a tray table got upset when the passenger in front of her reclined his seat, hitting her in the head. That plane was diverted to Jacksonville, Florida.

The passengers on both the United and Delta flights were already sitting in premium coach sections that have 4 inches of extra legroom.

There were 14,903 flight diversions by U.S. airlines in the 12-month period ending in June, according to an Associated Press analysis of Department of Transportation reports. That means an average of 41 flights a day make unscheduled landings at other airports.

The government doesn’t break out the reasons for diversions, but industry experts say the vast majority occur because of bad weather or mechanical problems. And diversions remain a tiny portion of the 6 million annual flights in the U.S. — less than a quarter of a percentage point.

The decision to divert is up to the pilot. Delta spokesman Morgan Durrant says the crew must determine if the person is going to cause harm to others or has terrorist intentions.

It can cost an airline $6,000 an hour, plus airport landing fees, to divert the standard domestic jet, according to independent airline analyst Robert Mann.

“These costs are among the reasons why airlines ought to be arbitrating these in-flight issues instead of diverting, not to mention the significant inconvenience to all customers and possible disruption of onward connections,” Mann says.

“People should lose the emotion,” Baldanza says. “We’ve never had to divert because of legroom issues.”