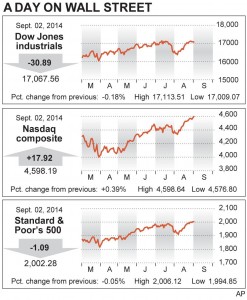 Concerns over weaker global growth appeared to overshadow strong reports about the U.S. economy Tuesday, nudging the stock market to a tiny loss.

Crude prices sank 3 percent, pulling down stocks of oil producers. Small-companies, which have fewer ties to the world economy, made gains. Meanwhile, the dollar reached a one-year high against the euro.

The Institute for Supply Management, a trade group, said its gauge of manufacturing reached 59 in August, the highest level since March 2011, buoyed by new orders for goods and increased production. Separately, the Commerce Department said that construction spending surged 1.8 percent in July, the biggest increase in more than 2 years.

“It’s clear we have a very solid economic expansion, but the stock market isn’t buzzing much at all,” said Anastasia Amoroso, Global Market Strategist at J.P. Morgan Funds.

… she said, that signs of solid growth raise the odds that the Federal Reserve will move to lift short-term interest rates. Rate increases typically slow stock markets down.

“We’re moving closer and closer to higher rates,” Amoroso said, “so strong economic momentum could actually put a damper on the market.”

… key events and economic reports out later in the week could make for volatile trading.

The European Central Bank meets Thursday, amid expectations that the bank will move to support the region’s flagging economy. The U.S. employment report for August comes out Friday. Stronger hiring by U.S. businesses and rising corporate profits have helped push the S&P 500 index up 8 percent this year.

Ablin said a stock market drop caused by the Fed hiking rates wouldn’t exactly be a bad thing. Waiting too long could make the pain much worse. “I would rather take a spoonful of medicine today than a tourniquet later.”

Major markets across Europe were mixed. Germany’s DAX inched up 0.3 percent, and both the CAC-40 in France and Britain’s FTSE 100 ended flat.

The euro continued its summer slide, hitting $1.313 against the U.S. currency. Recent reports have shown the eurozone’s economy slowing to a crawl … The price of oil slumped, pulling down shares of oil and gas companies. Benchmark U.S. crude dropped $3.08 to close at $92.88 a barrel, its lowest price since January. Brent crude, a benchmark for international oils used by many U.S. refineries, fell $2.45 to end at $100.34. That was Brent’s lowest closing price since May of 2013.

Exelixis lost more than half its value following news that the drug developer’s potential treatment for prostate cancer fell short in late-stage research. The company’s stock plunged $2.29, or 55 percent, to $1.85.

This article appeared in print on page 34 of the September 3rd, 2014 edition of Hamodia.