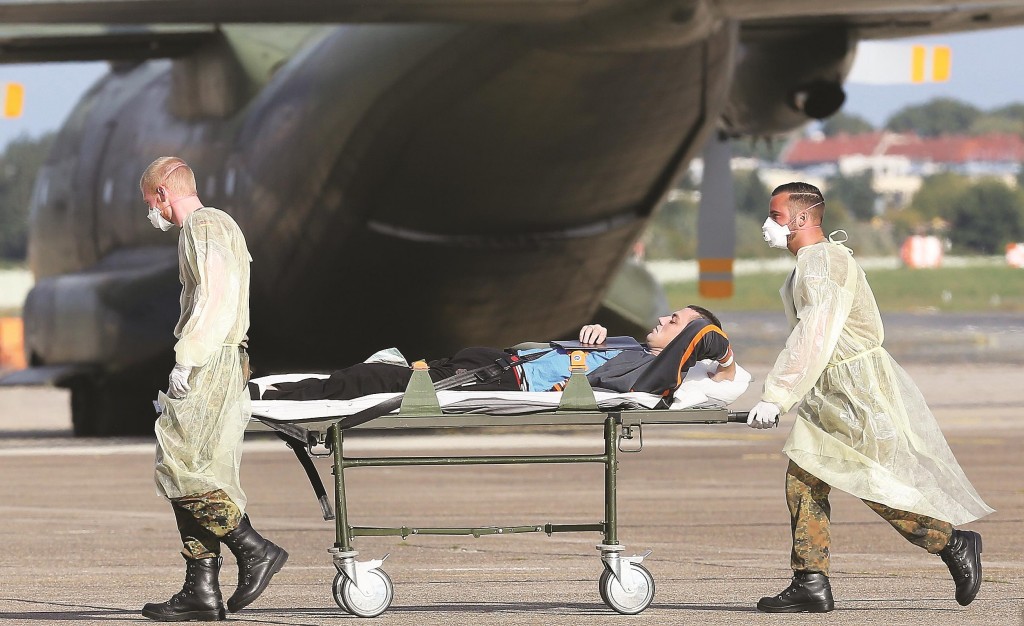 The ferocity of the attack on the fleeing Ukrainian troops was clear, days after the ambush by Russian-backed separatist forces.

The rout early Sunday near the village of Novokaterynivka marked a major intensification in the rebel offensive, one that the Ukrainian government, NATO and the United States say has been sustained by Russia’s direct military support.

Moscow has stepped up its harsh rhetoric as well. A leaked report said European Commission President Jose Manuel Barroso said President Vladimir Putin told him that Russia could take over Kiev “in two weeks” if it wished.

Following a month of setbacks in which government troops regained territory, the  separatists have been successful in the last 10 days, just as columns of Russian tanks and armored vehicles have been seen crossing the border. President Barack Obama and other NATO leaders will be attending a summit Thursday in Wales to create a rapid-response military team to counter the Russian threat.

Yet the results of much deadlier weapons of war could not be denied.

The smashed tanks, APCs and trucks were part of a massive column fleeing after being encircled in the town of Ilovaisk, which the Ukrainian government was compelled to concede after weeks of battles. Judging by how close together the stricken vehicles were, the incoming fire was precise and intense.

“They were going to surrender, and they began to bomb them,” said Novokaterynivka resident Anatoly Tyrn, who had the turret of a tank land beside his home.

Ukrainian army personnel have been allowed to travel to Novokaterynivka, about 36 kilometers (23 miles) southeast of Donetsk, and surrounding rebel-held areas to retrieve their soldiers’ bodies.

Villagers and the separatists say the number of Ukrainian military dead was huge, although the government has maintained a tight lid on the precise figure.

The separatists began fighting Ukrainian troops in April, a month after Russia annexed Crimea. The war has left more than 2,500 people dead and forced at least 340,000 to flee.

It also has left Ukraine’s economy in tatters. Ukraine might need billions in additional support if the fighting persists through next year, the International Monetary Fund said Tuesday. Just covering the shortfall in the central bank’s reserves would require an additional $19 billion by the end of 2015, it said.

Ukrainian Defense Minister Valeriy Heletey said on his Facebook page that the counterinsurgency operation was over and the military was now facing the Russian army in a war that could cost “tens of thousands” of lives.

“This is our Great Patriotic War,” he wrote, using the local terminology for World War II.

Russia’s Foreign Ministry dismissed Heletey’s remarks as “shocking,” accusing him of trying to shift blame and keep his post amid a series of military defeats.

Ukrainian and several Western countries say Russia has sharply escalated the conflict by sending regular army units across the border. NATO estimates at least 1,000 Russian soldiers have entered Ukraine, helping turn the tide in the last week in favor of the rebels. The alliance also says 20,000 other Russian soldiers have been positioned along the frontier.