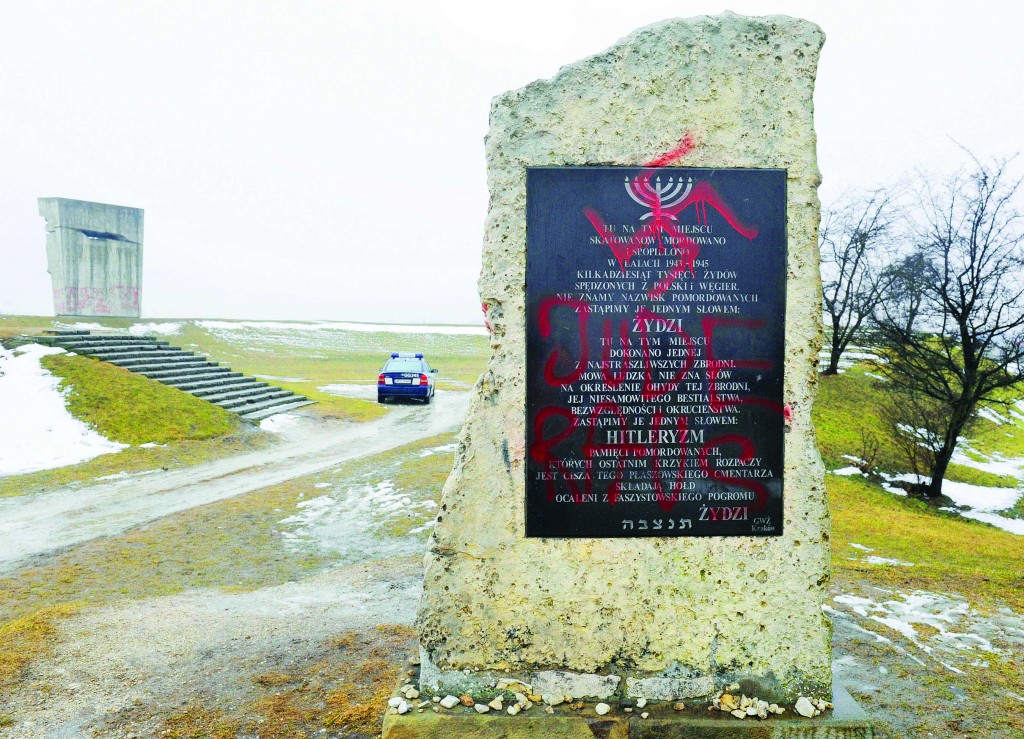 Poles, separated from the rest of Europe by the Iron Curtain for almost half a century, always believed they truly belong in the West – but even now, NATO and EU memberships notwithstanding, they often fear they do not really make the cut. These nagging suspicions were confirmed this summer. As mass demonstrations against Operation Protective Edge, from London to Paris to Berlin, often turned into displays of vicious anti-Semitism, Poland remained an oasis of calm. Two small demonstrations did in fact take place in front of the Israeli embassy in downtown Warsaw, but they hardly made it into the national, let alone international, news.

While European governments rained criticism and anger on Israel, the Polish Minstry of Foreign Affairs (MFA) limited itself to a terse condemnation of the murder of the three Israeli teenagers near Chevron, expressions of sympathy to their families, and an appeal to the Palestinian side to help turn the perpetrators in. “We also hope that the Israeli side will refrain from wide-scale actions the innocent Palestinian population might fall victim of,” said the July 1 statement.

Since then, Warsaw only issued a travel warning and briefly cancelled flights.

The farewell reception given a few days ago by the MFA to Ambassador Zvi Rav-Ner, coincidentally leaving Warsaw now after a five-years-long mission, was an exemplar of cordiality.

So: What does Poland have that France, to name just one Western European country, does not? What prevents Poles from behaving like Europeans? Michael Sobelman, the press officer of the Israeli embassy, quickly rattles off for Hamodia a list of reasons.

“There are few Arabs in Poland, left-wing movements are marginal, and the right wing is not fundamentally anti-Israeli. Furthermore there still is lingering guilt for the hostile reaction of Communist Poland to the Six-Day War, and the anti-Semitic campaign that followed. We are grateful for the position taken by the Polish government, the MFA in particular, and appreciate it” – he adds.

Fair enough. No statistics on Arab immigrants exist, but the number of all Polish Muslims regardless of ethnic origins, including native Polish Tartars, is estimated at 20 to 30 thousand; members of all Jewish organizations, by comparison, are assessed at eight thousand. Both groups are therefore totally insignificant in an essentially homogenous, overwhelmingly Polish-by-ethnicity and Roman-Catholic-by-faith nation of 39 million.

Arab immigrants tend to blend in and assimilate, even if they often run into nasty xenophobia: Poland, one is tempted to say, is ecumenically anti-Semitic, disliking Jews and Arabs alike. In a 2013 poll 33% declared negative attitudes toward Palestinians, and 34% toward Jews.

The right is split on its attitudes toward Israel. While a majority of right-wing columnists criticize the Jewish state, often because of dislike of Jews in general, some have expressed their support for Israel in its fight against Islamic fundamentalism, seen as a common enemy.

The first demonstration in front of the Israeli embassy, on June 17, was organized by an extreme-right group, National Renewal of Poland (NOP), known for its anti-Semitism. Some 50 people, separated by a police line from some two dozen pro-Israel counter-demonstrators, Jewish and non-Jewish, yelled explicitly anti-Semitic slogans: “We don’t apologize for Jedwabne” (reference to a wartime massacre of Jews by Poles), or “We will make soap out of you.” The lone Palestinian participant seemed more and more concerned by the company she found herself keeping.

“This was a cry of hatred,” Anna Chipczynska, the recently elected chairperson of the Warsaw Jewish community, told Hamodia. “We stood and listened with disbelief. I would call the situation absurd, outrage mingling with a sense of threat. When anti-Semitism — shocking and degrading, [though] often ignored and ridiculed — hits you, it hits you hard.”

Poland’s Chief Rabbi Michael Schudrich, also present at the demonstration, remarked that for many younger Jews there, this was their first direct confrontation with anti-Semitic hatred, and they were deeply affected by it.

The next demonstration, on June 25, organized by the Left, started in front of the office of the Prime Minister: Some 300 participants demanded Poland end its rather extensive military cooperation with Israel. Then they marched towards the Israeli embassy, where a group of counter-demonstrators awaited; again, the police separated the two groups. “The forces of order, during the few demonstrations, behaved professionally and objectively,” says Sobelman.

In comments published on the community portal jewish.org.pl, Piotr Kadlcik, chairperson of the Union of Jewish Religious Congregations, echoed his feelings. He also expressed his concern about the higher number of participants in this second demonstration. “After the sorry attempts by the right wing, I expected from the left a repeat performance. I was wrong,” he admitted.

Yet the slogans yelled at this demonstration — “Warsaw, Gaza, common cause” or “Free Gaza” (in English!) — were much less objectionable; the left had immediately criticized the anti-Semitism of the previous extreme right demonstration. But the organizer of the counter-demonstration, 27-year-old Tadeusz Markiewicz, fresh back from Herzliya where he had studied conflicts and conflict resolution, had earlier said in a public meeting that he finds it impossible to express his pro-Israel views among his leftist peers.

One might be tempted to disregard these two demonstrations altogether: 350 participants are but a drop in the bucket of anti-Israeli and anti-Semitic hatred which had flooded the streets of Western European cities. Yet in a country notorious for the extremely low turnout at events of political importance (fewer than 50% bother at all to vote), even small numbers are relevant. For a minority that cares enough about something to go out in the street for it can sway an apathetic majority, or at least have its own views go unopposed. Furthermore, the numbers of Arab immigrants will grow, not dwindle, and so will probably the impact of the anti-Zionism of the European left on Polish youth raised after Communism. They do not necessarily share the reflexive mistrust of leftist slogans their parents, having experienced Communism, routinely display.

Also, the fact that a segment of the hard right might be willing to decide that anti-Islamic prejudice trumps the anti-Jewish one should be cold comfort to Jews, who have no reason to pin their hopes on right-wing extremists, or on prejudice, whatever its target.

Finally, the lingering guilt for the communist anti-Semitism of almost half a century ago referred to by Sobelman is certainly not going to remain a major foundation of public attitudes, even if Jews would be quick to list also other historical events they believe Poles should feel guilt for. It would seem, therefore, that the only reason there was not more public anti-Israeli outrage is that there seemed not enough reason to express it; hardly a rock-solid base for future optimism.

This view, however, would probably misread a deeper mood among Polish public opinion. When the popular Jewish-owned and Israeli-themed Warsaw downtown eatery Tel-Aviv had its façade smeared with slogans: “Free Gaza,” “Zionism is racism,” and the like, the owners decided to make the cleaning up a public event. Scrapers, brushes and white paint were distributed among the assembled volunteers who joined in the fun, and latecomers were disappointed they had nothing more to paint over. The event got its own slogan: “Make hummus, not war” – and excellent free hummus was contributed by a Lebanese eatery across the street.

A columnist in the liberal Gazeta Wyborcza whose coverage of Protective Edge was, incidentally, more sympathetic to the Palestinian side — called  the painting of slogans as ridiculous as spraying a kebab joint to protest the war in Syria, but more dangerous as it clearly could be seen as anti-Semitic. Nobody wanted to rush to the ideological defense of the anonymous slogan sprayers, and local radio gave “Make hummus, not war” supportive coverage.

Nothing much, one might comment, just some people cleaning up an eatery. But numbers alone, as with the demonstrations, do not tell the real story. There seems a general unwillingness in Poland to go for the nastiness which has apparently by now been accepted as the norm further west. Not that Polish demonstrations, when they happen, are genteel affairs: Right-wing militants or incensed trade unionists have been known to act with uncontrollable violence. But even the latter attribute it not to ideological considerations but to the realand anxiety-provoking precariousness of jobs and uncertainty of future. Apart from the extreme right, therefore, no one seems to condone ideological hatred. And on the issue of Israel, even the right is split.

This used to be, a generation or two ago, the European norm, even if observed more in the breach.  Anti-Semitism was beyond the pale not only because of what it meant for the Jews, but because of what it meant for everybody: the memories of where it had led Europe were still too fresh. And in Poland, more marked by the war than any other European state, these memories still shape public attitudes. Small wonder then that the country seems not to fit well in a continent ever more oblivious of its past.

Konstanty Gebert is an international reporter and columnist at Gazeta Wyborcza, Poland’s largest daily. In the 1970s and 1980s, he was a democratic opposition activist, underground journalist, and organizer of the Jewish Flying University. He is the founder of the Polish Jewish intellectual monthly Midrasz.