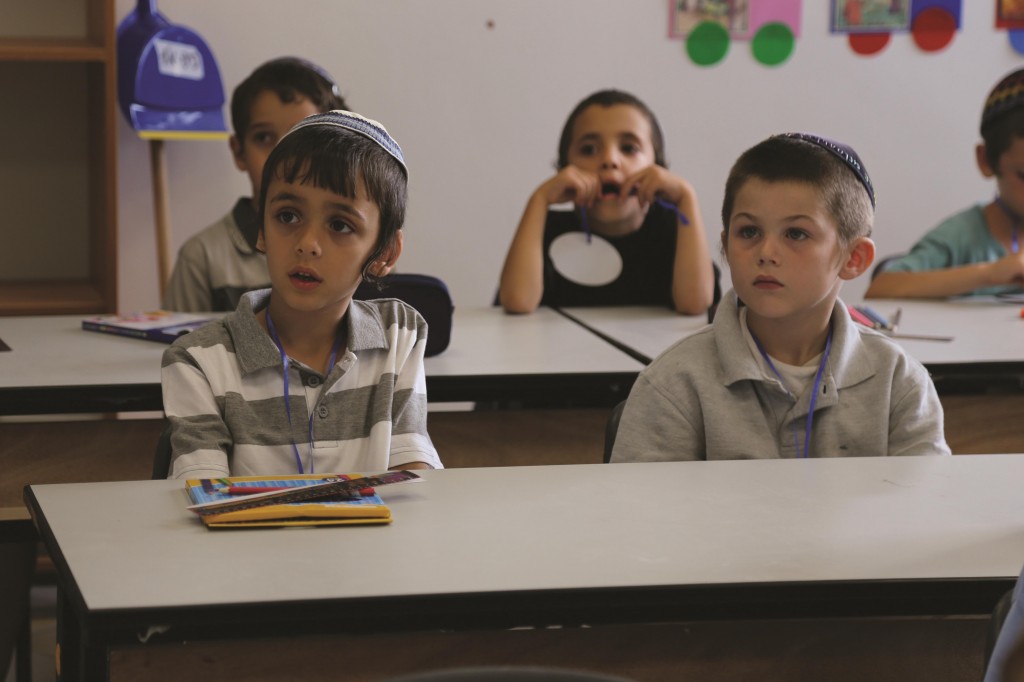 Over two million Israeli children arrived for school on Monday, after seven weeks of war with Palestinian terrorists in Gaza failed to disrupt the opening of the educational year.

Some 2,105,394 students returned to 2,100 new classrooms and 495 preschools across the country to meet the needs of a burgeoning population, according to official figures.

But there were signs that the Education Ministry was still less than ready. Many parents have joined a movement called the “Sardine Protest” — a reference to children packed like sardines
in overcrowded classrooms.

The ministry has ordered local authorities to maintain the national standard of a maximum 40 children per class, and mandated the opening of more classes if the number of pupils exceeded that number. But the parents are demanding that the maximum class size in the first and second grades be reduced from 40 to 32.

Commenting on it, protest organizers told Ynet: “As a result of our joint efforts with the parents association, we are receiving solutions for schools across the country that are particularly crowded.”

Just the day before the first day of school, the cabinet approved a 2 percent cut of the Education Ministry budget, totaling some NIS 480 million to the 2014 budget, to help pay the costs of Operation Protective Edge.

The issue is nothing new for the chareidi sector, which has long struggled with overcrowding in dilapidated and temporary structures.

Classes in the chareidi school system began at the end of last week, on Rosh Chodesh Elul.

But in Yerushalayim on Monday, the chareidi Bais Yisrael girls’ school did not open its doors, in protest against the municipality’s failure to follow through on a promise to relieve intolerable overcrowding. A proposal to move third-grade classes to a  community center was rejected by parents as unsuitable for a variety of reasons, including safety (the building is not secure from undesirable elements) and the lack of a proper Torah environment.

Instead of shipping the young girls to a location separate from the school, they asked that the city provide additional classrooms on adjacent property. But city officials have cited technical and financial obstacles.

In addition, chareidi MKs and members of the Municipal Council on Monday decried the lack of appropriate housing for two kindergartens in the Ramot neighborhood.

United Torah Judaism MK’s Rabbi Moshe Gafni, Uri Maklev and Yaakov Asher, along with council members Yisrael Kelerman and Eliezer Rochberger, visited one kindergarten in Ramot Aleph which is currently being held in a bomb shelter, and another with 31 children being taught in a private residence in Ramot Bet.

“It’s moving to see the children so happy on the first day of the year, but at the same time sad to see the conditions they’re learning in,” said Rabbi Gafni.

Elsewhere, particular attention was focused on the communities of the Gaza Belt, where life was still getting back to normal after the fighting.

In Ashdod, employees at the Pashosh kindergarten, which was struck by a rocket, removed shrapnel marks off the walls and slides ahead of the students’ arrival.

“We are a little scared but we are excited,” said Ronit Bart, a resident of Kibbutz Saad and an English teacher in its school. “A lot of children in our area really need to go back to a routine.”

Her 11-year-old daughter, Shani Bart, said it felt a “little bit weird” to suddenly be going back to school.

“There were some difficult times and we didn’t leave our houses at all,” she said.

Not everyone was back in school on Monday. Many residents of Nahal Oz, a community close to the Gaza frontier where a 4-year-old boy was killed by a Palestinian mortar shell, are hesitant about coming back. The Education Ministry said about a dozen families still had not returned. Their children have been placed in alternate schools for the time being.

Meanwhile, in east Yerushalayim, the first day of school in the neighborhood of Jabel Mukaber was marred by violence. Dozens of masked Palestinians attempted to block the institution’s principal from entering the building, and then attacked police, The Jerusalem Post reported.

According to the Arab press, the protest was sparked by lack of educational services and overcrowding.

Police spokesman Micky Rosenfeld said rocks were thrown at responding officers, three of whom were lightly wounded, one requiring hospitalization, he said.

Police used non-lethal riot dispersal methods, including tear gas stun grenades, to rout the protesters, though no arrests were made.

Four out of the eight schools in Jabal al-Mukabbir have yet to open.