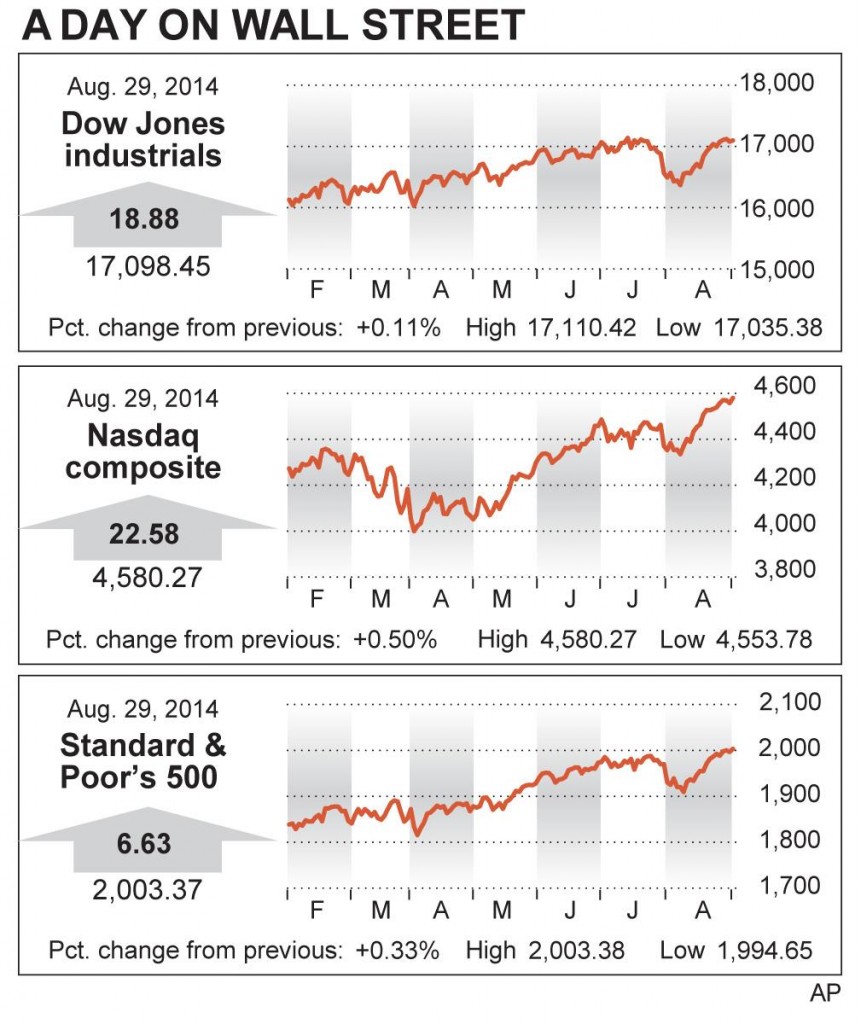 The milestone-crushing run capped a week when the S&P eclipsed the 2,000-point mark for the first time. And the index ended August with a gain of 3.8 percent.

Months of solid job gains, strong company earnings and a bevy of corporate deals contributed to the rally, part of a bull market that’s been rumbling on for more than five years.

The market appeared ready for a correction at the end of July, but the downturn didn’t last long. For most of August, stocks have managed to shake off geopolitical conflicts from Ukraine to Gaza and Iraq.

“The market has a good underlying tone,” said Mike Levine, portfolio manager of Oppenheimer Equity Income Fund. “People feel like the economy is gaining some strength and the job market is getting better and corporate earnings should be pretty good.”

Even in a quiet day of trading ahead of the Labor Day holiday, stocks eked out a gain.

The indexes opened higher, but eased soon after, as investors got the news that consumer spending fell and income growth slowed in July.

Traders also had their eye on the conflict in Ukraine, as a group of European Union foreign ministers accused Russia of invading the eastern region of the country and said Moscow should be punished with more economic sanctions.

The markets began to recoup some losses by midmorning, however, when a gauge of consumer sentiment showed greater optimism in August, particularly among higher-income groups. Some better-than-expected company earnings also lifted stocks.

Overall, the indexes wavered between small gains and losses throughout the afternoon.

Stocks rose broadly, with all 10 sectors in the S&P 500 index higher for the day, led by utilities.

The gains marked the index’s best August since 2000.

“It’s been a good August,” said Linda Duessel, senior equity market strategist at Federated Investors. “I imagine it’s the end of the month and people closing their books are saying ‘I better show I’m invested, we had a brand-new high this week.’”

Nevertheless, some investors may grow hesitant next month. September is widely considered the stock market’s worst.

Since World War II, the S&P 500 index has ended the month with a loss half of the time. Recently, however, September has been good to investors. The S&P 500 has turned in a September loss just twice in the last decade: in the depths of the financial crisis in 2008 and following a fight over raising the government’s borrowing limit in 2011.

Last year, investors saw an array of threats lined up after Labor Day, including a fight over the federal budget and a possible U.S. attack on Syria. The result? The S&P 500 gained 3 percent in September.

Elsewhere in financial markets, bond prices were little changed. The yield on the 10-year Treasury note held at 2.34 percent.

The price of oil rose for the fourth day in a row on concerns about the escalating tensions between Ukraine and Russia, the biggest oil exporter outside of OPEC. Benchmark U.S. crude rose $1.41 to close at $95.96 a barrel. Brent crude, a benchmark for international oils used by many U.S. refineries, rose 73 cents to close at $103.19. Wholesale gasoline rose 3 cents to close at $2.783 a gallon. Natural gas rose 2.1 cents to close at $4.065 per 1,000 cubic feet.

— Avago Technologies, which makes semiconductors used in smartphones, computer servers and other devices surged $5.73, or 7.5 percent, to $82.09. The big gain came after the company reported earnings that beat analysts’ estimates. Avago rose the most in the S&P 500 index and touched an all-time high.

— Tesla Motors and a state-owned Chinese phone carrier announced plans Friday to build 400 charging stations for electric cars in a bid to promote adoption of the technology in China. Tesla increased $5.84, or 2.2 percent, to $269.70.

U.S. financial markets will be closed Monday for Labor Day.