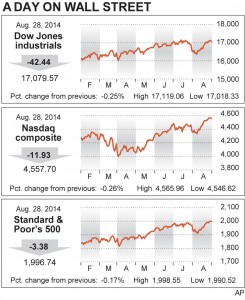 The escalating conflict in Ukraine, disappointing retail earnings and profit outlooks combined to weigh down the market, eclipsing some good news on the U.S. economy and labor market.

“The key driver was largely the Ukraine news and the uncertainty of what that means,” said Erik Davidson, deputy chief investment officer at Wells Fargo Private Bank.

U.S. stock index futures pointed to a lower opening in premarket trading Thursday, following a downward turn in global stock markets as traders reacted to the developments in Ukraine. The yield on the 10-year Treasury note declined as investors sought out lower-risk assets.

A string of disappointing earnings and profit outlooks late Wednesday and early Thursday also weighed on the market early on.

Not all the news was discouraging.

The Commerce Department estimated that the U.S. economy grew at an annual rate of 4.2 percent in the April-June quarter.

The Labor Department added to the good news, saying the number of Americans seeking unemployment benefits slipped last week to 298,000, a low level that signals employers are cutting fewer jobs and hiring is likely to remain strong.

“The economic data in the U.S. continues to look quite good,” Davidson said.

Nonetheless, major U.S. stock indexes opened lower. They pared some of their losses as the day went on, but remained down the rest of the day.

Major U.S. indexes are on track to end higher for the month and are up for the year.

Trading volume was lighter than the recent average ahead of the Labor Day holiday.

Investors seized on the lackluster earnings to reduce their holdings in several retailers.

Tilly’s lost 4.3 percent after the company forecast a difficult summer, noting customer traffic was down and merchandise discounts were cutting into its profit. The stock slid 37 cents to $8.15.

Genesco also declined after the apparel and footwear seller issued a profit outlook that was shy of Wall Street’s expectations. Genesco sank $6.73, or 7.6 percent, to $81.94.

The poor earnings and outlooks from retailers ran counter to what has otherwise been a strong corporate earnings season, which has helped drive a late-summer revival for U.S. stocks.

The dour outlooks are particularly discouraging when one considers that the sector is entering what traditionally is the best season for retailers, said JJ Kinahan, chief strategist at TD Ameritrade.

“That does put a bit of a note of caution over everything,” he said.

Elsewhere in the market, the price of oil rose for the third day in a row on evidence of a stronger U.S. economy. Benchmark U.S. crude rose 67 cents to close at $94.55 a barrel on the New York Mercantile Exchange.

Brent crude, a benchmark for international oils used by many U.S. refineries, fell 26 cents to close at $102.46 on the ICE Futures exchange in London.

This article appeared in print on page 8 of the August 29th, 2014 edition of Hamodia.