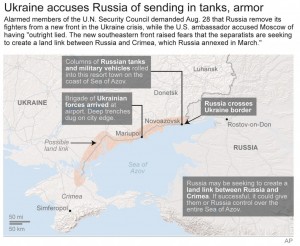 Ukraine accused Russia on Thursday of entering its territory with tanks, artillery and troops, and Western powers said Moscow had “outright lied” about its role and dangerously escalated the conflict.

Russia dismissed the allegations, describing the fighters there as “Russian volunteers.” The Kremlin has repeatedly denied arming and supporting the separatists who have been fighting Ukrainian troops for four months in the gravest crisis between Russia and the West since the end of the Cold War.

NATO said at least 1,000 Russian troops are in Ukraine and later released what it said were satellite photos of Russian self-propelled artillery units moving last week.

He urged Ukrainians to remain calm.

“Destabilization of the situation and panic, this is as much of a weapon of the enemy as tanks,” Poroshenko told the council.

President Barack Obama spoke with German Chancellor Angela Merkel, and both leaders agreed Russia must face consequences for its actions.

He added that Russia “has deliberately and repeatedly violated the sovereignty and territorial integrity of Ukraine, and the new images of Russian forces inside Ukraine make that plain for the world to see.”

But Obama ruled out a military confrontation between the U.S. and Russia. He said Russia’s activity in Ukraine would incur “more costs and consequences,” though these seemed to be limited to economic pressure that will be discussed when Obama meets with European leaders at a NATO summit in Wales next week.

At an emergency session of the U.N. Security Council, Western representatives expressed outrage.

Southeastern Ukraine had previously escaped the fighting that has engulfed areas to the north, and the only way rebels could have reached the southeast was by coming through Russia.

If separatists create a land corridor from Russia to Crimea, it could give them or Russia control over the entire Sea of Azov and the gas and mineral riches that energy experts believe it contains. Ukraine already lost roughly half its coastline, several major ports and significant Black Sea mineral rights in Russia’s annexation of Crimea.

This article appeared in print on page 1 of the August 29th, 2014 edition of Hamodia.