WHO: Ebola Outbreak Could Spread to 20,000 People 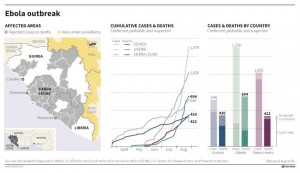 In a grim assessment, the United Nations health agency said Thursday that the world’s worst Ebola outbreak continues to accelerate and could infect more than 20,000 people before it is brought under control.

More than 3,000 suspected and confirmed cases have been reported in four West African countries, and at least 1,552 people have died of the virus, according to figures released by the World Health Organization. But the actual number of cases in the areas of intense transmission could be two to four times those reported, WHO said.

“This far outstrips any historic Ebola outbreak in numbers,” Dr. Bruce Aylward, the organization’s assistant director general for emergency operations, told reporters in Geneva. “The largest outbreak in the past was about 400 cases.”

The disease has typically surfaced in remote forest villages and killed most of its victims before it could spread very far. This is the first time an outbreak has extended to four countries, including densely populated urban areas.

More than 40 percent of the cases have occurred in the last three weeks, although most are concentrated in only a few localities, WHO said. The fatality rate is 52 percent, lower than in previous outbreaks.

The outbreak began in Guinea in March and spread to Liberia, Sierra Leone and Nigeria. A separate Ebola outbreak has killed at least 13 people in the Democratic Republic of Congo but is not believed to be related to the infections in West Africa.

There is no vaccine or cure for the disease, which is spread through contact with infected bodily fluids.

WHO’s assessment was contained in a roadmap that aims to stop Ebola transmission in the affected countries within six to nine months and to prevent it from spreading internationally. The strategy is expected to cost about $489 million and will need at least 750 international and 12,000 local health workers to implement, The Associated Press reported.

This article appeared in print on page 2 of the August 29th, 2014 edition of Hamodia.