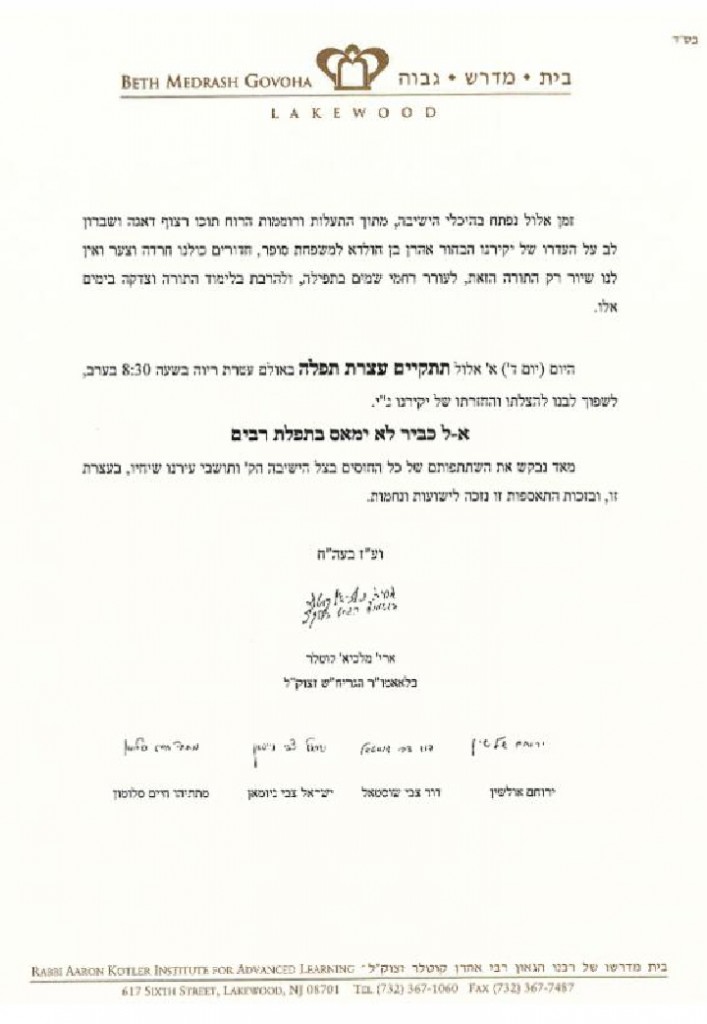 Nearly six days after the disappearance of Aaron Sofer, no progress has been made in determining his whereabouts. The Sofer family, together with a wide range of community activists, are urging authorities to pursue the search to their utmost as well as soliciting the tefillos of Klal Yisrael around the globe.

“At the moment it appears that police feel they are clueless,” said Shlomo Menashe Sofer, a cousin of Aaron who is acting as a spokesperson for the family. “However, they are still not ruling out that he might be still in Yerushalayim somewhere.”

Sofer told Hamodia that as the days pass and more areas around the city are searched, it becomes more probable that he is somewhere outside Yerushalayim. However, not enough of the city has been covered to justify expanding the search area.

Aaron Sofer, 23, a Lakewood native, was last seen Friday afternoon when he went for a hike with a friend in the Jerusalem Forest. The two ascended a mountain together, but became separated on the way down. The young man has been missing ever since.

“Professionals from all sides have said that they have never spent so much time searching in one area without finding a single thread or clue,” said the family spokesperson. Under such circumstances, there is no reasonable basis on which to base suspicions of what happened to the young man, much less to conjecture as to his whereabouts.

A combined force of police, Hatzolah, ZAKA, and hundreds of volunteers has been searching tirelessly since the disappearance was reported. Authorities are using specially trained dogs and Tuesday, some Army personnel added additional support.

“Most of the volunteers are American yeshivah bachurim,” said Mr. Sofer. “There have also been some from Har Nof and Bayit Vegan which are close to where he was last seen.”

Sofer said that there were approximately 1,000 volunteers searching last Sunday, but that since then, numbers have dwindled.

“Being that the search is so unfocused we need a lot more manpower to cover ground,” he said.

Politicians and community activists in the U.S., including Rep. Christopher Smith (R-N.J.) and Sen. Corey Booker (D-N.J.), have mounted significant pressure on the Israeli government to keep up and intensify the search.

“Dan Shapiro, the U.S. ambassador, has been involved,” said Mr. Sofer. “Representatives from the FBI were sent by the consulate. They were taken on a tour of the site and confirmed that the authorities are doing everything in their power.”

Tefillah gatherings and Tehillim groups throughout the Jewish world have been organized to daven for the safe return of Aaron ben Chulda.

In the Tamir Hall in Yerushalayim, Wednesday evening, an event for women was addressed by Rebbetzins Rena Tarshish and Yehudis Samet.

Additionally, as we go to press, an atzeres has been organized in Lakewood for Wednesday night by the Agudath Israel of New Jersey. Tehillim is to be recited and a message from the Sofer family as well as divrei hisorerus from Harav Yitzchok Sorotzkin is planned.

“We are appealing that everyone should unite in chizuk and to look for zechuyos,” said Mr. Sofer.

In an appeal to authorities themselves, he added, “We have to keep looking further. This cannot remain an unsolved mystery.”