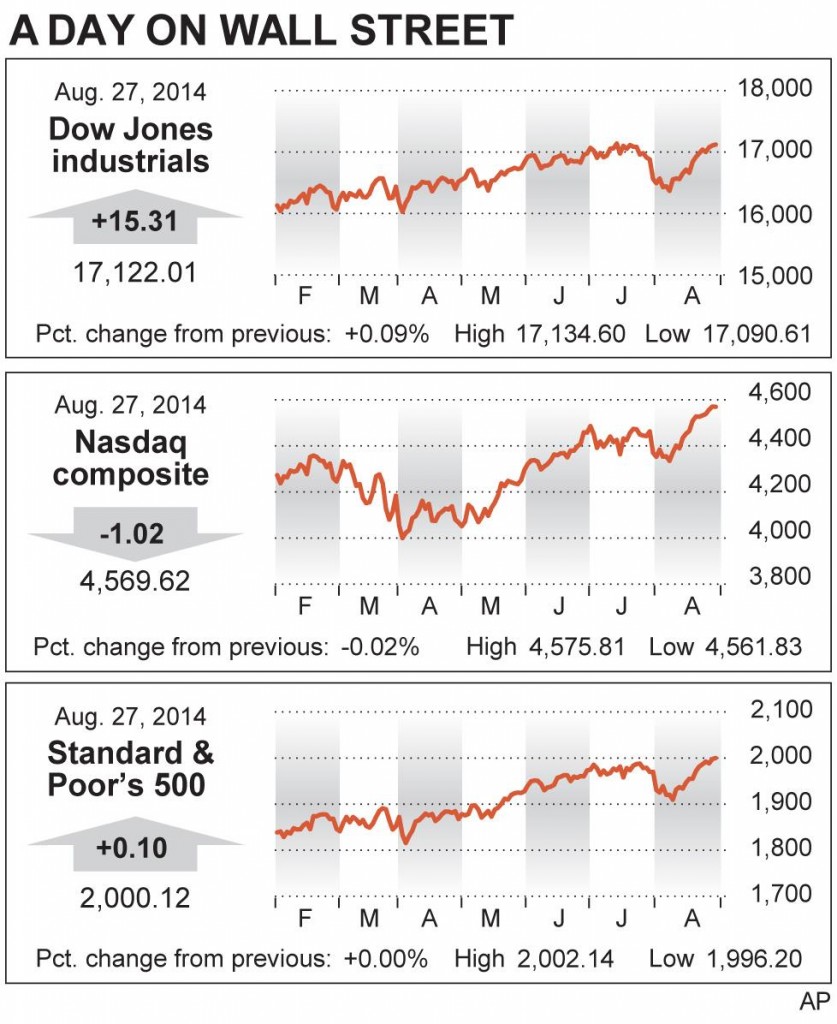 Even in a daylong sideways drift, the Standard & Poor’s 500 index managed to eke out its third record close in three days.

U.S. stocks ended essentially flat on Wednesday after spending much of the day wavering between tiny gains and losses.

The S&P 500 notched a gain of one-tenth of a point over the day before, extending its rise for the week.

Overall trading volume was about one-third below the recent average, reflecting an absence of major market-moving news and the approaching Labor Day holiday weekend.

“Having achieved this 2,000 level, the market is simply taking a pause, catching its breath,” said David Lebovitz, global market strategist at JPMorgan Chase.

Early on, investors largely had their eye on company earnings. Retailers Express and Tiffany & Co. were among the companies to post better-than-expected results. Express’ shares surged 12.7 percent, adding $1.86 to $16.45., while Tiffany rose 98 cents to $101.75.

Stocks declined shortly afterward, then recovered, only to waver through small gains and losses through much of the day.

The Dow is 16 points shy of its own record closing high set July 16. The Nasdaq is still well below its dot-com era record.

Major U.S. indexes are riding a three-week streak of gains and are up for the year.

Investors have been encouraged in recent weeks by strong corporate earnings and data that point to a strengthening economy after a sluggish start to the year. The trend has helped extend a five-year bull market, lifting indexes to new records this year.

It’s likely that trading will continue to thin further in the next couple of days as more investors get in vacation mode for the Labor Day holiday weekend.

Before that, however, the market will get a look at a few more economic barometers.

On Thursday, the Commerce Department delivers its latest estimate of how much the U.S. economy grew in the second quarter. Economists are looking for 3.9 percent growth after a decline of 2.1 percent in the first quarter.

New figures on personal income and spending and on how consumers feel about the economy are due out on Friday.