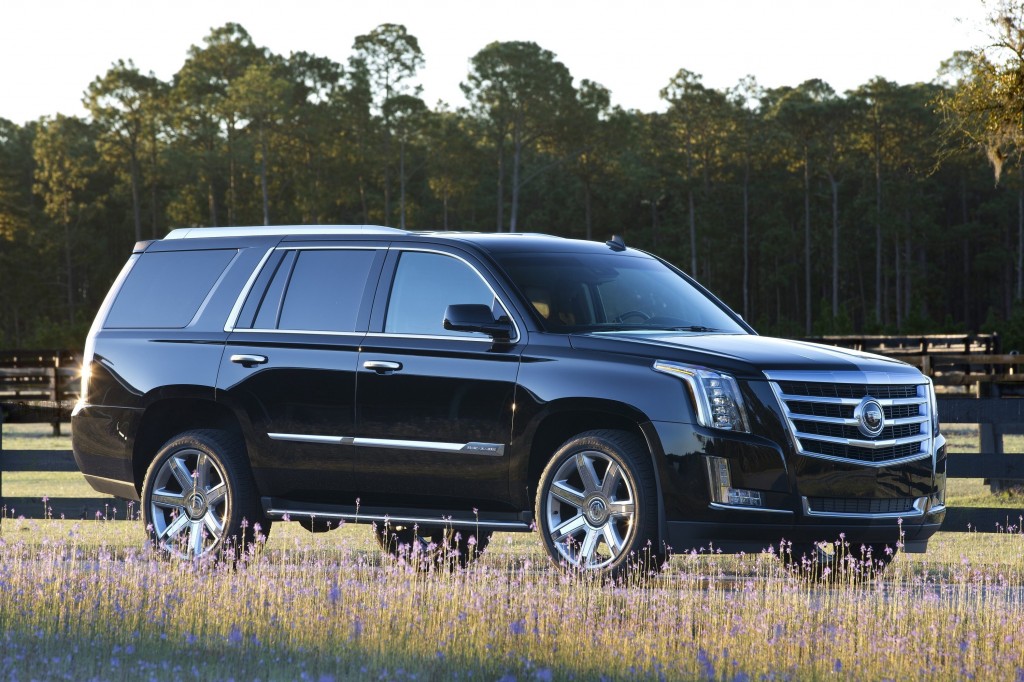 General Motors builds the Escalade in its Arlington, Texas, plant along with its siblings, the Chevrolet Tahoe/Suburban and GMC Yukon. Since their arrival in the spring as early 2015 models, the big sport-utilities have been driving GM’s sales gains, which have been setting records lately.

Although the Escalade already was one of my favorite vehicles (I confess to having had one in the family for a while), the redesigned version moves the brand up a notch (along with the price).

The Escalade comes in two lengths, just like the Chevy and GMC versions — regular and extended. The ESV is the longer one, and is the same size as the Suburban and the Yukon XL. The ESV is 20 inches longer than the regular model, with a wheelbase that’s 14 inches longer. That gives it 60 percent more cargo space behind the third row of seats.

Gone from the lineup for 2015 is the EXT pickup version, as well as the Escalade Hybrid.

Our test vehicle for the week was the regular-length Luxury 4WD model (base price $78,295 plus freight). It had no options, so the total with freight was $79,290.

GM says the new Escalade features a “quieter cabin, smoother performance and more-efficient powertrain,” and after a week in the driver’s seat, I certainly can attest to the quietness. Even at interstate-highway speeds, the interior of our test vehicle was so quiet that we could carry on a conversation between front and rear passengers in a normal tone of voice.

The exterior restyling wasn’t radical. In spite of numerous changes, the new model is clearly recognizable as an Escalade, although it’s slightly boxier than before, especially at the rear. It’s still big and bold, with seating for up to eight people.

GM says there are more changes inside than out, and there were many I noticed. Our vehicle had quite comfortable dual captain’s chairs in the middle row, with a center pass-through to allow access to the third row. This arrangement cuts passenger capacity down to seven, but makes the middle row much more comfortable.

The exterior features modern LED lighting, including high beams, with four vertically stacked crystal lenses, and low beams with five crystal lenses. There also are vertical LED taillights, with the Cadillac insignia that lights up. LED-illuminated door handles are included on the high-end model.

Under the hood of all models is a new 6.2-liter V-8 engine rated at 420 horsepower and 460 pound-feet of torque, up from the previous 403 horsepower and 417 pound-feet. It’s connected to a six-speed automatic transmission with Tap Shift control for manual shifting.

Our tester, with a Dark Granite Metallic exterior color and Jet Black leather interior, came with the 22-inch painted wheels.

Inside, there are new premium features such as cut-and-sewn and wrapped leather upholstery and trim, with wood trim options. Up front, the seats are heated and cooled; in the second row, they’re heated.

For modern connectivity, the Escalade features Cadillac’s CUE (Cadillac User Experience) system, with voice recognition and touch controls. Our vehicle had the navigation system with an eight-inch color display, along with GM’s OnStar system.

A standard 12.3-inch digital gauge cluster had four selectable themes, and there was a head-up display that projected the vehicle’s speed and other information on the bottom of the windshield.

To keep the backseat passengers occupied, the Escalade can be equipped with a Blu-Ray rear entertainment system, which comes with a nine-inch, roof-mounted screen on the regular-length model, and two nine-inch screens on the ESV version. (The system was not included on our test vehicle).

We had dual USB ports and a 12-volt power outlet in front, where there is a small open cubby perfect for portable devices. There were two more USB ports, an auxiliary input and another 12-volt outlet inside the center console, which also doubled as an armrest for the driver and front passenger.

There were seatback pockets on the front seats, accessible to the middle row, and there were also air-conditioning controls, a 115-volt AC outlet, and a 12-volt outlet for the rear passengers.

Power? There was plenty of that from the big V-8 engine, although we never had the vehicle fully loaded, and did not try pulling a trailer. Acceleration was smooth, as was shifting of the automatic gearbox.

Safety features included front and rear automatic braking, which uses radar and ultrasonic sensors to help avoid low-speed collisions; and the segment’s only Front Seat Center-Mounted air bag. Available are such features as Forward Collision Alert, Lane Departure Warning, and GM’s Safety Alert Seat, which vibrates under the driver to warn about potential crash threats. A backup-camera system was included on our tester.

Highlights: The Escalade is a premium family hauler with lots of power, a smooth ride, and a long list of available high-tech features.

Negatives: Can get quite pricey.