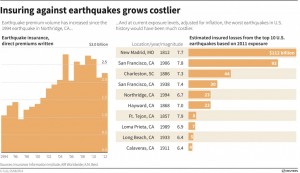 Despite California’s ever-present risk of major earthquakes, the number of homeowners in the state with insurance coverage for quake damage has dipped significantly over the last several decades, from 33 percent in 1996 to just 10 percent today.

The reason, say experts and some homeowners: the high cost of coverage, the quarter century lapse in a major quake until Sunday’s shaker in Napa County and, for some people, the expectation that the state or federal government will step in to reimburse homeowners when the Big One hits.

“You think about it after the earthquakes,” said 44-year-old Robert Jordan of Napa, who has avoided getting quake insurance despite living through the 1989 Loma Prieta quake and another shaker near his home in 2000. “But it’s amazing how quickly we go back to our normal ways.”

Despite having major damage to glassware and other breakable items in his kitchen during Sunday’s quake, he added, he’s still probably not going to get a quake policy because “it’s expensive and major quakes happen so infrequently, it seems like a luxury more than a need.”

Many other people share that view, said Glenn Pomeroy, CEO of the California Earthquake Authority, a public agency that provides about 70 percent of all of the residential quake policies in the state.

“It’s out of sight, out of mind.” Because it had been so long since a major temblor rocked California, he added, “A lot of people just fail to realize it could happen to them.”

Less than 6 percent of homeowners in Napa had the insurance, the authority said.

Aside from the length of time since the last major quake, the cost of coverage is another big reason many people shun insurance.

One more factor in the relatively low rate of homeowners who buy earthquake insurance might be confusion, said San Francisco lawyer Robert Berg, who specializes in insurance issues.

“The earthquake policies are complicated,” he said. “So people will read them and say, ‘I don’t know what I’m getting out of this.’”

Even so, the Napa quake — where the damage has been estimated by some experts at $1 billion to $4 billion —  could prompt more people to reconsider buying a quake policy.

“Most definitely,” said Michael Barry, a spokesman with the Insurance Information Institute, a non-profit industry group. “I’m sure insurance agents in Northern California will be getting a number of calls inquiring about how to go about buying earthquake insurance.”

This article appeared in print on page 6 of the August 27th, 2014 edition of Hamodia.