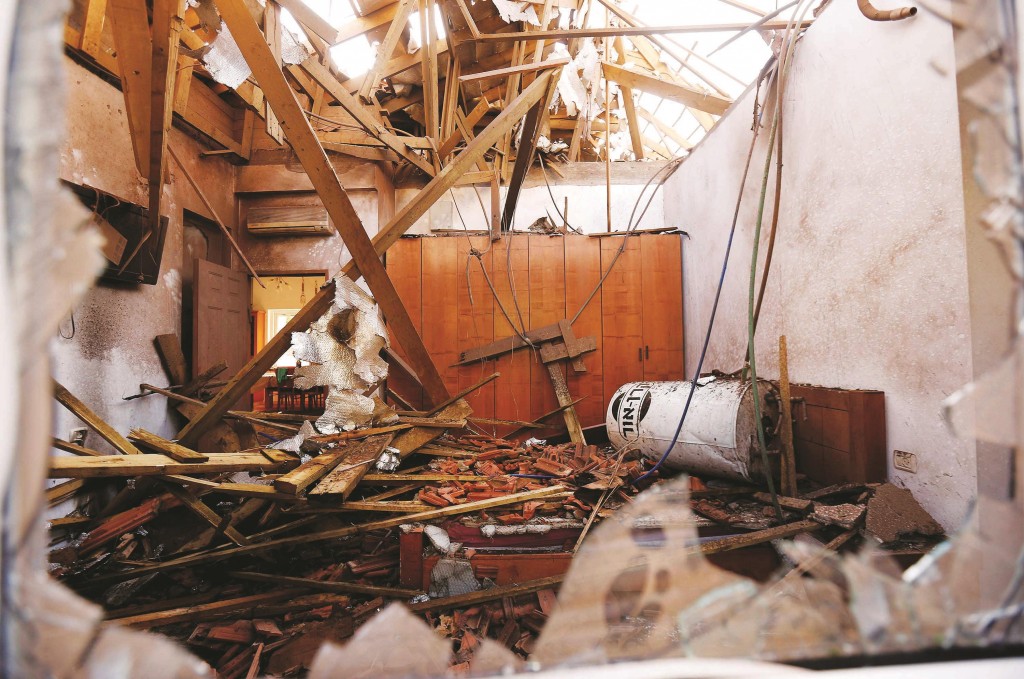 The second longest war in Israel’s history, after the 1948 War of Independence, seems to have come to an end Tuesday night, as of 7 p.m. But it is not over. Neither side signed any papers, and did not even meet to discuss this new “arrangement.” Hamas and the Islamic Jihad, followed by Yerushalayim, accepted the framework that was drafted by the Egyptian foreign ministry and intelligence officials in Cairo to end the war. They sent the papers by fax to the two sides, who did not peruse them too thoroughly. They just informed the senders that the proposal was “accepted.” Both sides have had enough of the war.

Hamas reached the realization that, with each passing day, they were getting closer to the breaking point, while the Israelis wanted to finish the war after realizing that, without a ground operation and a decision on far  reaching actions, they would not be able to achieve much more. And therefore, it would be better to stop now.

And so, on the 50th day of the war, an “arrangement” was put in place, without any signatures or guarantees. No one can say if this 12th ceasefire that took effect last night will hold and, if it will, for how long.

Although a ceasefire was scheduled to take effect at 7 p.m. Israel time on Tuesday, air raid sirens could still be heard in southern communities for some time after that. However, perhaps an indication that Hamas intends to uphold the ceasefire is the fact that senior Hamas operatives began to emerge from their hiding places and appeared in public last night.

The “open-ended” ceasefire agreement reached Tuesday between Israel and Hamas in Gaza “is an opportunity, not a certainty,” U.S. Secretary of State John Kerry said, while throwing his “strong support” behind the agreement.

“We are approaching the next phase with our eyes wide open. We have been down this road before and we are all aware of the challenges ahead,” Kerry said. “Today’s agreement comes after many hours and days of intensive discussions about how a sustainable ceasefire might provide the space and the opportunity to address long-term issues.”

Kerry said that “certain bedrock outcomes” are minimal requirements for such a long-term solution, including a guarantee for Israel that terrorist attacks, rocket firings, and tunnel construction will cease.

But speaking to reporters on Tuesday, State Department spokeswoman Jen Psaki said that the Secretary of State had no plans to restart the peace process in the near future.

Noting the amount of time remaining in Obama’s presidency — roughly two and a half years— she said that such a process was possible, but not immediately on the agenda.

Tuesday was a particularly difficult day, with near constant rocket fire. In the lead-up to the ceasefire, the firing grew exceptionally heavy, with dozens of missiles landing in just a short time. Two people were killed by a mortar that landed in a southern kibbutz towards evening.

A spokesman for the Eshkol Regional council said that 116 rockets and mortar shells were fired into the area from Gaza on Tuesday, prior to the ceasefire.

Monday night was unusually quiet, and there were hopes that ahead of a ceasefire in the offing, both sides were backing down. But early Tuesday morning, the quiet was shattered by heavy rocket fire across the south.

The Cohen’s house in Ashkelon suffered a direct hit while the family was home. B’chassdei Shamayim, the parents awoke when they heard the warning siren at 6:30 a.m., and rushed their children to the protected room of the house. The rocket struck the parents’ bedroom shortly after they left it.

“I do not know how we survived this. It was a miracle from G-d,” Yuval Cohen said.

Magen David Adom paramedics said they treated 51 people after the rocket attack in Ashkelon, who were evacuated to Barzilai Medical Center in the city. Seventeen of the injured suffered light wounds from broken glass and from falling objects; three were injured while running for cover and 31 were treated for shock.

Israel waited about an hour to make sure that it was not just an isolated incident, and then dispatched air craft for a new day of air strikes. Within a short time, two high-rise buildings in Gaza were toppled, with 15 and 13 stories respectively. Before the heavy bombs were launched, Israel dropped little missiles on the roofs of the buildings to warn residents to leave. Most of the people heeded the warnings and saved their own lives. The aircraft arrived, and within a few minutes, the buildings were flattened. It is unclear to both sides how many people had remained inside, but they did not survive.

The IDF also bombarded two schools in the north and center of the Gaza Strip which had served as bases for terror activity and from where rockets were fired at Israel. Over the last week, rockets have been launched constantly from the Ali Ben Avi Talab school on the outskirts of the Zeitoun neighborhood near Gaza City. The mortar that struck and killed Daniel Tragerman, 4, of Kibbutz Nachal Oz on Friday was fired from this school. Furthermore, throughout the war, missiles were fired at Ashdod from the school complex. Yesterday, shrapnel from a missile fell on the roof of a mall in the city. Baruch Hashem, not one person was injured.

The school was bombarded after a 12-hour warning period in which civilians taking shelter there were urged to leave.

In a later salvo of rocket fire around 2 p.m. on Tuesday, rocket shrapnel fell in the courtyard of a kindergarten in Ashdod. The shrapnel caused an electric cable to fall. No injuries were reported in the attack. Miraculously, the teacher and her assistant, who had been working in the kindergarten to prepare it for the new school year, had left just a few minutes before.

Toward evening, two people were killed and five were injured on a kibbutz in the Eshkol Regional Council from two mortar shells that exploded right near them with no advance warning. Rescue personnel worked under near constant fire; they declared one dead at the scene and evacuated the wounded to the hospital by helicopter. The second person passed away later in the evening.

The name of the first casualty was released late last night: Zev Etzion, 55, the security coordinator of Kibbutz Nirim. He is survived by his wife and five children. The name of the second casualty was released on Tuesday: Shachar Melamed, 43, also of Kibbutz Nirim, survived by his wife, three children and parents. They were killed while working to repair an electric cable that had been damaged by a previous mortar shell.

Israeli officials attributed the attainment of the ceasefire to the devastation wrought to the Hamas infrastructure and Gaza in general.

The assessment of senior Israeli security officials is that of growing skepticism among Hamas operatives about whether continuing the fighting would be worth the price in Hamas commanders and men killed, destruction of key military installations, and the destruction of many terror tunnels, which Hamas considered to be its ultimate weapon.

In addition, the terrorist organization faces discontent in the street. The prevailing mood is one of bitterness and anger toward Hamas, whose leaders were among the first to hide and left the civilians to fend for themselves.

A senior security official said Tuesday evening that, “In the last few days there was pressure within Hamas to reach a ceasefire agreement as a result of the price that the Gaza Strip paid and that the organization itself paid.”

Regarding Hamas claims of victory on Tuesday night, the official was dismissive: “Even if only one Palestinian was left there, Hamas would claim victory. Hamas was critically hit.”

Summarizing the war, a senior official in Yerushalayim said that Israel struck some 5,200 terror targets by air, sea and land, including 2,000 launching sites and 30 terror infrastructure sites. According to the IDF and other security sources, some 700 to 800 terrorists were killed, out of a total of 2,250 reported dead. More than 11,000 Gazans were wounded. Some 2,000 homes were destroyed completely while another 18,000 structures sustained damage of some type. Nearly 400,000 Gaza residents have been displaced from their homes and, when many of them leave their places of refuge in UNWRA schools and return home, they will discover that they have no more homes, and they will have only Hamas to blame, the official said.

He added that “Israel enjoyed broad international legitimacy during this operation, all due to the fact that it accepted 11 ceasefires, all of which were violated by the terrorists. Israeli citizens do not have to be particularly impressed by the celebrations that Hamas is organizing in the Strip, as they try to present themselves as the victors.” He claims they know the truth very well and, in reality, what happened is exactly what Israel wanted to happen. Hamas got to the point of accepting the Egyptian proposal when it was beaten and battered. When it refused a ceasefire that wasn’t on its terms, they had to accept one in which not a single one of its significant demands was met.

Israel’s expansion in recent days of the air strikes, its focus on senior operatives and high-rise buildings, as well as schools and mosques from where rockets were fired. In the past 10 days, Israel struck 320 targets and killed more than 60 terrorists. It also destroyed financial and military infrastructure, as well as civilian areas where people allowed the terrorists to use their property to launch missiles.

The source believes it will take Gaza between 10 and 18 years to rebuild. They will not receive the materials easily and will not be able to rearm themselves because the Egyptians have also clamped down on the Sinai access, and Israel controls the sea and land crossings.

According to the agreement, the two sides will begin dialogue, with the Egyptians as negotiators, within a short time, but not later than one month after the ceasefire takes effect. Each side will be able to raise the issues it wants and the discussions will include all issues. Israel has already declared that it will insist on the disarmament of the Gaza Strip, and Hamas will demand the removal of the blockade, the establishment of sea and airports, the release of prisoners, and international assistance for reconstruction.

Israel agreed to continue allowing trucks with equipment and supplies into the Strip, and even increased the number of trucks carrying food, medication and basic supplies. Concurrently, wounded Gazans will be able to leave the Strip to Ben Gurion Airport from where they will be able to fly to hospitals around the world that will agree to treat them.