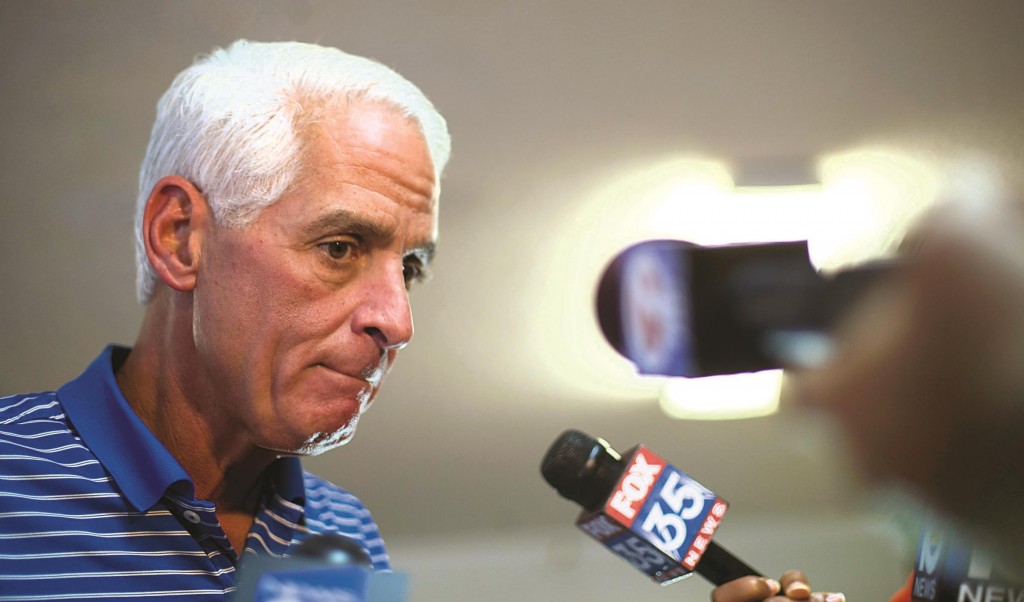 Former Republican Gov. Charlie Crist was poised for a political comeback Tuesday as voters select a Democratic nominee to challenge Republican Gov. Rick Scott in Florida, one of four states where voters were choosing candidates for statewide office.

Crist, running against former state Sen. Nan Rich, has won three statewide races as a Republican, and it wasn’t that long ago that he called himself a Ronald Reagan/Jeb Bush Republican. He was once considered a potential running mate for 2008 Republican presidential nominee John McCain and he had the backing of GOP leaders in a 2010 bid for Senate — until Marco Rubio used an image of Crist hugging President Barack Obama to chase Crist from the primary.

After campaigning for Obama in 2012 and completing his political transition later that year, Crist, 58, now is the favorite to win the Democratic nomination to face Scott. His opponent, Rich, has been running for governor longer than Crist has been a Democrat but lacks Crist’s name recognition and money.

A Crist vs. Scott general election matchup would be sure to feature a high-profile debate over Obama’s health care overhaul. Pressured by Republican legislators, Scott abandoned an initial call to expand Medicaid under the Democratic law. Crist has blasted the decision and, unlike many Democrats on the ballot this year, is an unapologetic cheerleader for the Affordable Care Act.

Republicans in Vermont will decide among four candidates who want to take on Democratic Gov. Peter Shumlin. Other statewide offices, including an at-large House seat, also are on the ballot.

The Florida primary will be a test to see whether Democrats accept Crist’s political conversion. Democrats have opposed him in five statewide races. As a Republican, Crist was elected education commissioner in 2000, attorney general in 2002 and governor in 2006. He lost a U.S. Senate race as a Republican in 1998 and as an independent in 2010.

Despite initially campaigning as a strong conservative in the 2010 Senate race, Crist was widely considered a moderate Republican governor. The Democratic primary was an important hurdle for him, as he looks to prove he’s won over his new party.