Burger King to Buy Tim Hortons; New Firm to Be Based in Canada 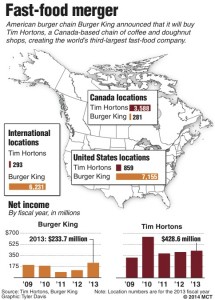 Burger King Worldwide Inc. said Tuesday it would buy the Tim Hortons coffee-and-doughnut chain for about $11.4 billion and shift the new firm’s headquarters to Canada, where the corporate tax rate is lower than in the U.S.

The cash-and-stock deal creates the world’s third-largest fast-food chain, with more than 18,000 restaurants in 100 countries and about $23 billion in annual sales. Burger King is looking to Canada’s Tim Hortons to boost its standing in the booming breakfast market.

Warren Buffett’s Berkshire Hathaway will help finance the deal with $3 billion, receiving preferred shares but having no role in management and operation of the new company, Burger King and Tim Hortons said.

Burger King and Tim Hortons are well-known names in their home countries and will continue to operate as stand-alone, independent brands in the so-called quick-service restaurant industry.

Behring is managing partner of 3G Capital, a Brazilian investment firm that controls Burger King. He will become executive chairman of the combined company and 3G Capital will own about 51 percent of the new firm, the companies said.

Burger King’s headquarters will remain in Miami, and Tim Hortons will stay in Oakville, Ontario. The headquarters for the combined firm will be in Canada, which will be its largest market.

The combined federal, state and local corporate-tax rate in Canada is 26.3 percent, according to the Organisation for Economic Cooperation and Development. The combined U.S. corporate rate is 39.1 percent.

Buying a foreign competitor in a lower-tax location and shifting headquarters to that company’s home country is known as a tax inversion. The maneuver has come under fire in Washington, as more U.S. companies are using it to lower their tax bills.

Analysts said there are strong strategic reasons for Burger King to purchase Tim Hortons beyond the tax benefit, which is not as large as some recent inversion deals in the pharmaceutical industry.

Still, Burger King is a popular U.S. brand and its decision to move its corporate headquarters to Canada could fuel efforts in Congress to place new restrictions on inversions.

“Burger King has always said, ‘Have it Your Way,’ ” he said. “Well, my way is to support two Ohio companies that haven’t abandoned their country or customers.”

This article appeared in print in the August 26th, 2014 edition of Hamodia.