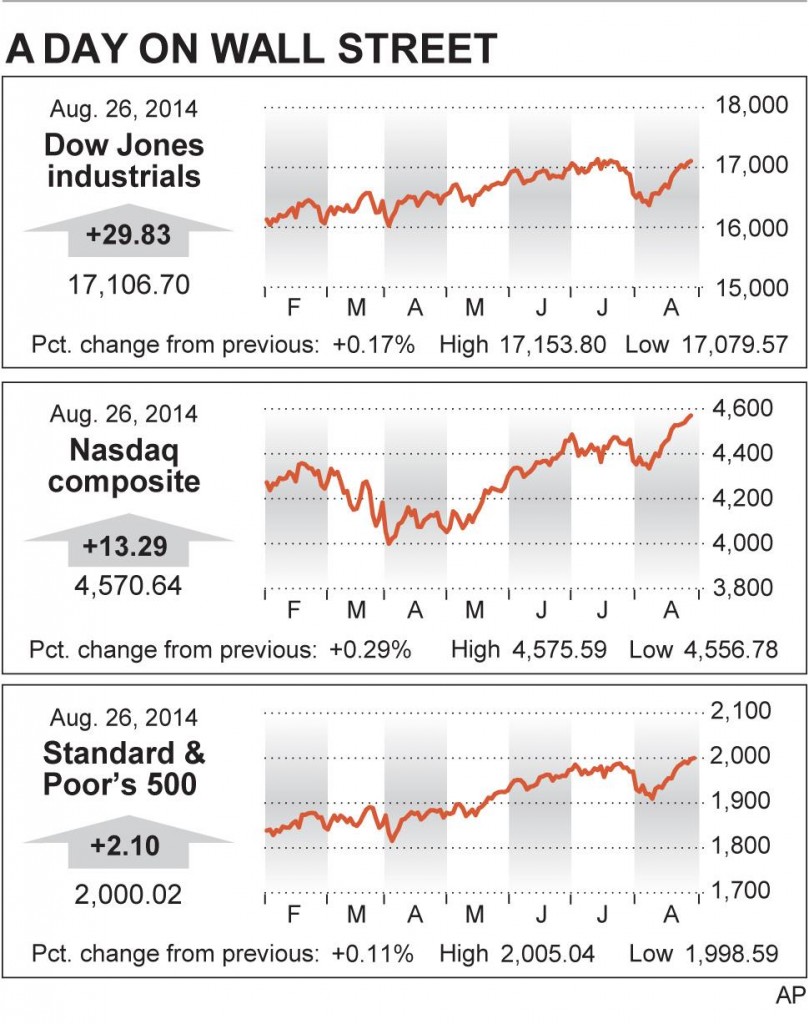 It was a big round-number day for the stock market.

The move extended the stock index’s record-shattering run this year. The latest milestone comes as investors see new signs that the economy is strengthening, a driver of stronger company earnings.

U.S. stocks, in the midst of a five-year rally, have surged in the final weeks of the summer after dipping earlier this month on concerns about geopolitical tensions in Ukraine and the Middle East.

The Conference Board said Tuesday that its consumer confidence index rose this month to the highest point in nearly seven years. A separate report showed that orders of durable manufactured goods surged by a record 22.6 percent in July, thanks to a jump in aircraft sales. A third report showed U.S. home prices rose in June, although at a slower pace.

Stocks opened slightly higher and remained up the rest of the day.

The Dow is 32 points shy of its own record closing high set July 16. The Nasdaq is still well below its dot-com era record.

Major U.S. indexes are riding a three-week streak of weekly gains and are up for the year.

The S&P 500 index, a widely followed barometer of the stock market, has closed at a new high 30 times this year. By this time last year, it had done so 25 times.

The Dow also has put up some big numbers this year, notching 15 new closing highs. That trails the 30 it racked up by this time a year ago.

While the market is setting records, many experts believe stocks remain fairly valued, though not cheap.

The S&P 500 is trading around 16 times the earnings companies in the index are expected to make over the next 12 months. The historical average on that measure is about 15 times.

• Best Buy fell $2.19, or 6.8 percent, to $29.80 after the electronics retailer reported that its fiscal second-quarter net income plunged 45 percent as sales weakened.

• Orbitz fell 4.6 percent after American Airlines and US Airways disclosed they are pulling flight listings from the site because they have not been able to reach agreement on a long-term contract with the travel booking website operator. Orbitz shed 39 cents to $8.04.