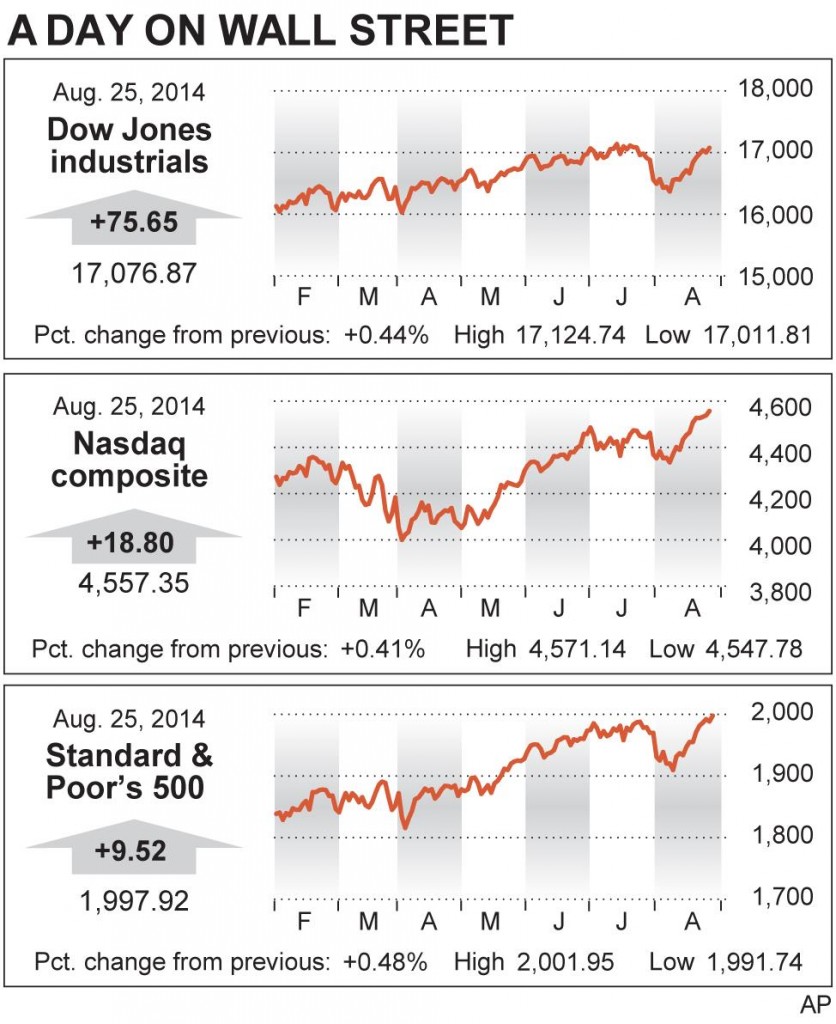 Summer doldrums? Not on Wall Street.

The stock market notched another first on Monday as the Standard & Poor’s 500 index nudged briefly past the 2,000-point mark and closed with its second record high in a week.

The move was the latest milestone in a five-year rally for U.S. stocks, which are enjoying a late-summer revival after dipping earlier this month on concerns about rising geopolitical tensions in Russia and the Middle East.

Investors have put aside those concerns for now, focusing instead on the improving outlook for the U.S. economy and the prospect of rising corporate earnings.

On Monday, traders were encouraged by some high-profile corporate deal news, which overshadowed sluggish sales of new homes.

News that Burger King is in talks to acquire doughnut chain Tim Hortons and create a new holding company headquartered in Canada had stocks pointing higher in premarket trading. That built on word over the weekend that California biotech company InterMune agreed to sell itself to Swiss pharmaceutical company Roche for $8.3 billion. Some other names in biotech also got a boost from the deal.

Shortly after the market opened, the Commerce Department reported that sales of new homes slid 2.4 percent last month to a seasonally adjusted annual rate of 412,000. Homebuilder stocks declined, but the report didn’t weigh down the broader market.

The S&P 500, a widely followed barometer of the U.S. stock market, crossed above 2,000 in the first hour of trading.

The index fluctuated above and below the milestone mark throughout the day and ended just below the 2,000 mark. The index closed above 1,000 points for the first time in February 1998.

The major U.S. indexes are riding a three-week streak of weekly gains and are up for the year.

Stocks, with support from the Federal Reserve’s easy-money policies, have been on a bull run for more than five years after the market bottomed out during the Great Recession in March, 2009.

“Unless the story changes, the stock market is going to get pushed higher by the lack of potentially good returns elsewhere,” Kelley said.

Corporate deals have been a recurring driver of the market this year. Investors seized on the trend on Monday, sending Burger King up 19.5 percent. The stock added $5.29 to $32.40.

The parent company of the Ann Taylor and Loft clothing chains also got a boost on news that a big shareholder is pressuring management to explore selling the company. Ann rose $2.42, or 6.4 percent, to $39.94.

Among other stocks making big moves, GrubHub fell $3.60, or 8.4 percent, to $39.16 after it disclosed that it may sell 10 million shares. The online restaurant delivery service had its initial public offering last year.

While stocks are riding high this summer, investors are still looking for signs that U.S. consumers are in a spending mood.

The market should get some fresh insight on Tuesday, when the government reports data on consumer confidence, home prices and durable goods.

“Are people who are getting employed actually spending on bigger-ticket items? That becomes the big test,” said JJ Kinahan, chief strategist at TD Ameritrade.