Business Saving Homes, a Buck at a Time
Business 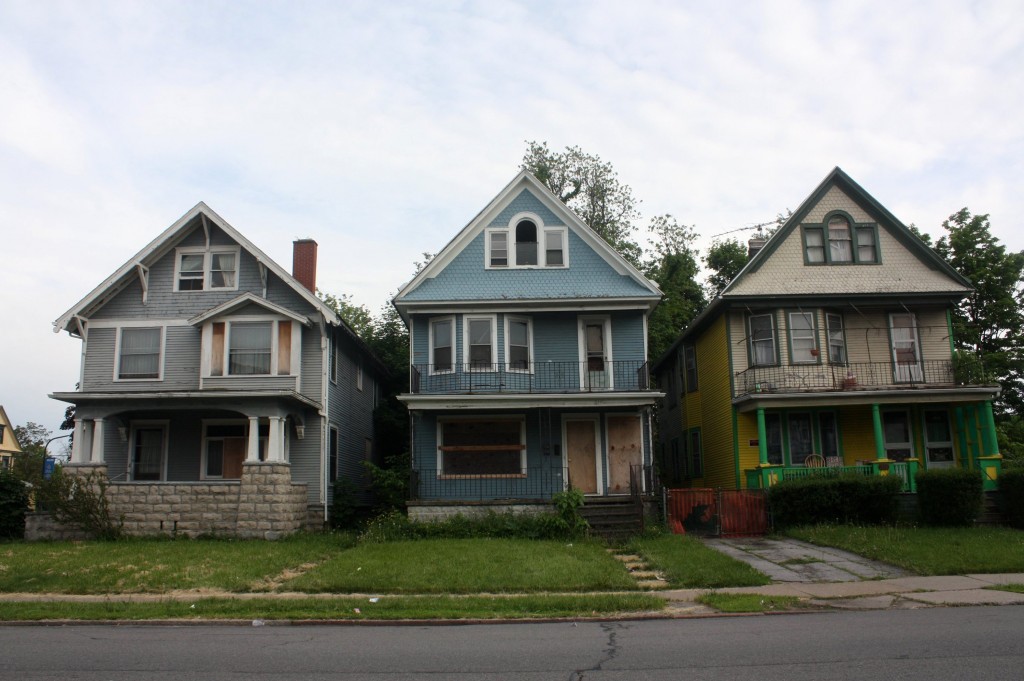 The breeze carries the tinny jingle of the approaching ice-cream truck, so Mike Puma leaves the railing he’s painting on his two-family, electric-blue home to buy a milkshake.

He pays more for the shake than he did his entire home.

Of course, when he bought this home for $1 this year, it had a demolition notice on the door, walls the consistency of a Three Musketeers bar and mold coating the ceilings. But Puma, 24, feels that he got a bargain. Plus, he takes pleasure in knowing that this century-old house will not be torn down.

“We’re reintroducing new life into these properties,” he said. “Not only are you taking a stand against demolition, but you’re taking a stand on what happens in this city.”

Across the Rust Belt, cities are beginning to tear down tens of thousands of vacant homes. But Puma and a small group of other activists in Buffalo are battling the demolition process, trying to find residents to buy the fixer-uppers.

Puma alone has saved two houses on his block by persuading friends to buy them through Buffalo’s Urban Homestead program, which allows residents to buy homes for a dollar if they show they have the resources to make necessary repairs and promise to live in them for at least three years.

Gary, Ind., launched its own version of the Dollar Home program last year, with an initial six houses sold for $1 each. Other cities, including Philadelphia and Detroit, allow homeowners to acquire vacant lots next door for a small sum.

Puma said Americans were too quick to destroy old homes, and he is fighting “the never-ending rumble of demolition equipment.”

Cities demolish salvageable buildings because there’s political incentive to clear up blight, said David Torke, a neighborhood activist and blogger who works with Puma to save old homes.

The money spent on demolition — $15,000 a home — could be spent to repair the houses and make them habitable, Torke said.

“We think of ourselves as emergency-room doctors dealing with a catastrophe, and we have to rely on a system of triage,” Torke said. “Problem is that we’re not dealing systematically with the catastrophe that’s before us, and we’re sending patients who have bumps and bruises to the landfill.”

While selling a home for a dollar sounds like a catchy solution to a pervasive problem in the Rust Belt, it’s not as simple as it appears.

Most of the homes require tens of thousands of dollars of work, so fixing one up can cost as much as buying a different house that’s move-in ready.

There are still not enough jobs in Buffalo to attract people to save the homes and then live in them for three years. In popular areas of the city that are turning around, there’s little incentive to sell the homes for a dollar.

“You’re seeing a strong resurgence of the idea — let’s try to work with what we have, not just clear everything and build anew,” said Justin Hollander, a professor of urban planning at Tufts University in Boston who studies shrinking cities. “But the fact is these Dollar Homes are generally in neighborhoods with high crime. It’s not a panacea.”

There are about 4,600 vacant homes in Buffalo and 16,000 vacant lots, said Brendan Mehaffy, executive director of Buffalo’s Office of Strategic Planning.

On average, about eight to 10 homes a year are bought through the Dollar Home program. Hundreds more are on the demolition list.

The idea of the Dollar Home program is all well and good, Mehaffy said, but when no one steps forward to buy the homes, neighbors complain about blight, rodents or crime, and the city is pressured to demolish.

Still, it’s hard to overlook the atmosphere on the blocks where Puma and Torke have been able to save homes.

Puma seems to have boundless optimism for even the most intimidating of projects. The walls, ceilings and floors of his house are stripped bare, there’s no plumbing or electricity, and wires still hang from the ceiling.

He works on the house all day on the weekends and then a few nights a week after work.

Across the street, his neighbor Kevin Harris, who has lived on the block for 21 years, watched admiringly as Puma painted the railing of his second-story balcony.

“At one point, I thought they were going to tear that house down,” Harris said. “But they’re really working (awfully hard) over there, and it’s a beautiful thing. I’d rather see that home than an empty lot any day.”