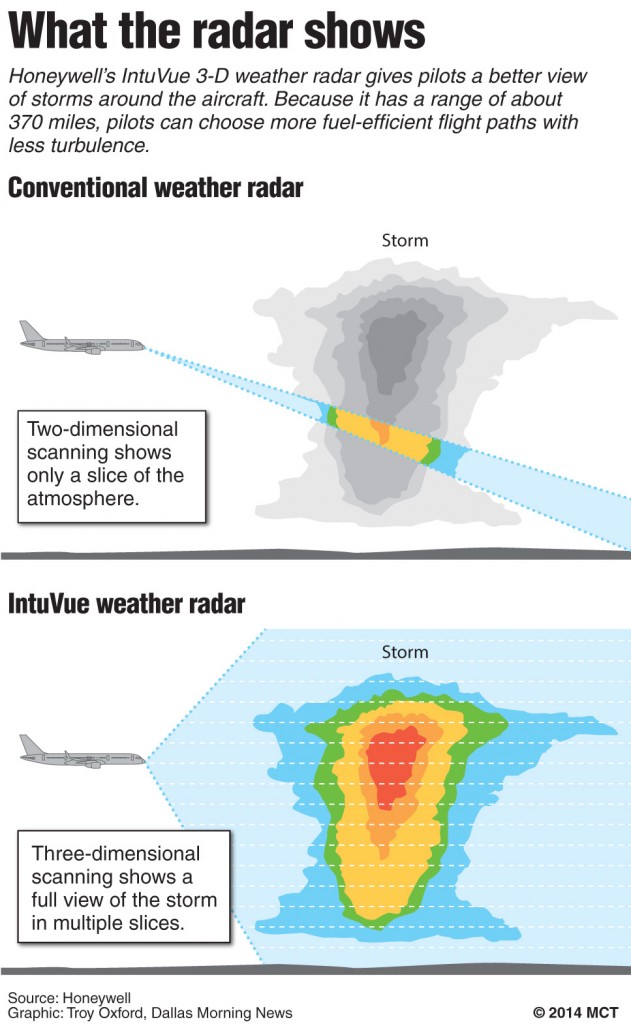 But on this sweltering summer day, Markus Johnson and Joe Duval are flying straight toward thunderstorms swelling up over the Gulf of Mexico along the South Texas coast.

It’s not because they long to fly their 1952 Convair 540 through the rollercoaster of updrafts and downdrafts, or to be pummeled by hail and rain. It’s to show off the latest generation of Honeywell International Inc.’s weather radar system, known as IntuVue.

They use the radar to skirt the right side of a good-sized thunderstorm, then the left side of another thunderstorm to the airplane’s right.

Inside the storms, the radar shows a lot of green (light rain) and yellow (medium rain), with a smidgen of red (heavy rain). But on the flight itself, the airplane glides through nearly smooth air as it flies between the two summer storms.

Of course, airlines and other aircraft operators have used radar for decades to help them locate and avoid storms. It’s a rare airplane that doesn’t have radar equipment installed in its nose and a display screen in the cockpit.

What Honeywell touts is that its new radar system displays a lot more information in greater detail, in three dimensions, and pilots don’t have to work nearly so hard to get it.

Greg Schauder, a Honeywell director of product marketing, said the two-dimensional radars usually require a pilot to manually change the radar scan if he wants to look higher up or lower down in a storm or in different directions. The radar collects information only where the pilot has asked it to scan.

However, the new Honeywell system automatically scans and stores information for the pilot to call up, review, analyze and react to, he said.

“Now that we have that information, there’s a whole lot we can do to do the analysis for the pilot.”

For airlines, better radar can help planes weave safely through and around weather systems. It can enhance safety and save money by reducing weather delays.

And for passengers, improved weather radar can reduce the midair bumps, jolts and plunges that come inside and on the periphery of storms.

The market for weather radar is huge, since both the Boeing Co. and Airbus have huge order books. In its most recent update, Boeing predicted that the industry will need 36,770 new airplanes by 2033, including 15,500 to replace older aircraft. Airbus sees the need for 29,220 new airplanes by 2013.

Honeywell’s new equipment is being installed on all new Southwest Airlines jets being delivered from Boeing Co., starting with the 66 Boeing 737-800s that had been delivered through June 30.

“The older radars, if you were in a dynamic weather situation, were very labor-intensive,” Lusk said.

The new weather radar “takes all that workload off the pilots, so you’ve got two pilots paying attention to flying the airplane vs. one pilot flying and one guy managing the radar,” Lusk said.

“From a pilot’s perspective, that is huge. It really is,” he said. “When you’re in those environments — busy airports, ATC (air traffic control), the radio’s going crazy, you’re getting vectors everywhere, things are happening, there’s constant chatter on the radio, it’s a workload-intensive environment to begin with. It helps when you have two pilots in the loop rather than one managing the radar.”

Said Schauder: “The pilot should be concentrating on flying, especially when you’re in weather, as opposed to manually tilting the weather radar up and down.”