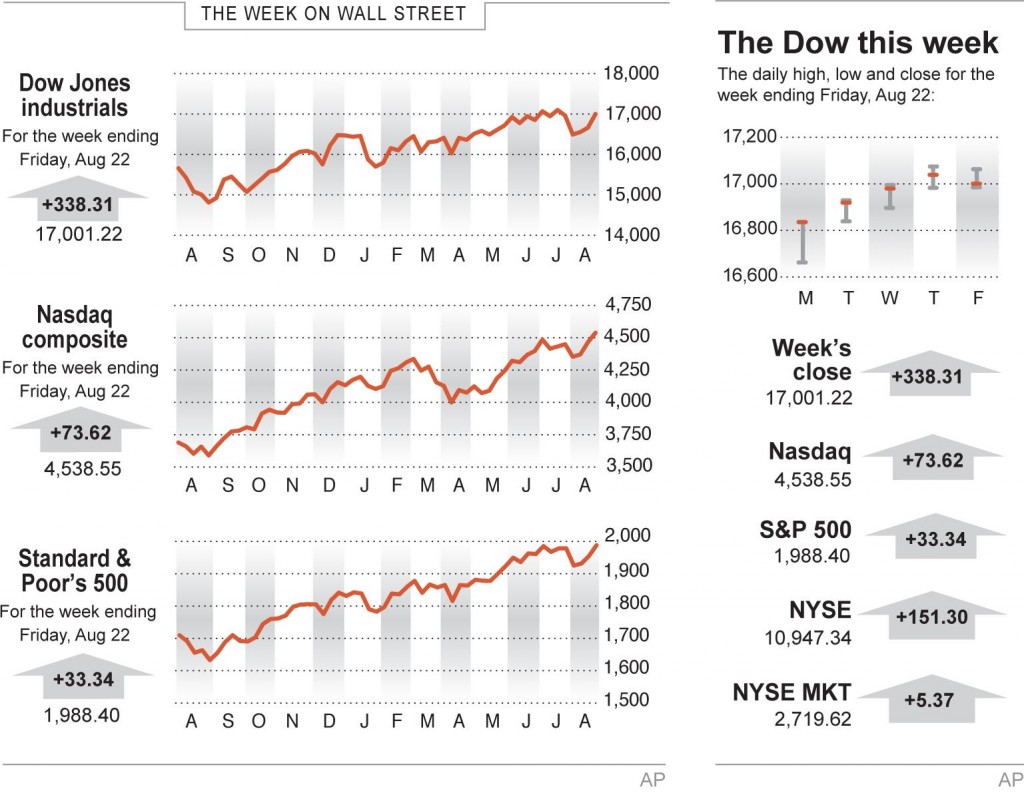 The stock market paused Friday, following four days of gains, after a speech by Federal Reserve Chair Janet Yellen left investors unsure about how the nation’s most important financial voice feels about raising interest rates in the coming months.

A flare-up in tensions between Ukraine and Russia also weighed on the market after a Russian convoy entered the country, purportedly to bring aid supplies.

It was a quiet day overall. Stocks moved between small gains and losses, then settled modestly lower in the last couple of hours. Trading was slow, as it has been all week, as the summer winds down and with many investors on vacation. It was the second-quietest day of the year for trading on the New York Stock Exchange.

Even with Friday’s modest losses, it was a strong week for the stock market. The S&P 500 rose 1.7 percent for the week, its best five-day performance since April.

The Fed dominated investors’ agendas this week. On Friday, Yellen addressed an annual conference of central bankers and other policymakers from around the globe at the Fed’s annual conference in Jackson Hole, Wyoming.

In her speech, which focused on labor markets, Yellen said the Great Recession complicated the Fed’s ability to assess the U.S. job market and made it harder to determine when to adjust interest rates. Yellen offered no signal that she had altered her view that the economy still needs support from the Fed in the form of ultra-low interest rates.

“I think this was business as usual for Yellen. She was measured and deliberate and the market had a minimal reaction to it,” said Michael Fredericks, portfolio manager of Blackrock’s Multi-Asset Income Fund, which has $8.8 billion in assets.

The timing of a Fed rate increase remains unclear; however most investors expect the first one to come sometime in 2015. Yellen’s speech comes two days after a report from the Fed seemed to show a growing chorus of policymakers wanting to raise interest rates.

“The uncertainty that policymakers feel on numerous fronts was evident in Yellen’s speech,” John Hoff, a fixed income strategist at RBS, wrote in a note to investors.

The Fed has kept its benchmark short-term interest rate, known as the Federal Funds Rate, near zero since late 2008 in order to simulate economic activity and demand. The downside to low interest rates is the possibility that they can lead to inflation.

The Federal Funds Rate helps determine interest rates on a variety of financial products including mortgages and credit cards, as well as the yields that bonds pay. Many investors believe the U.S. economy has recovered enough from the depths of the financial crisis to warrant higher interest rates.

The Fed has been winding down another economic stimulus program, large-scale purchases of bonds in the open market, since December.

Investors also had geopolitical tensions to contend with.

A Russian convoy entered Ukraine, defying the government there. Ukraine called the move a “direct invasion” intended to provoke an international incident. The action drew condemnation from the European Union, the United States and NATO. The trucks are purportedly carrying aid to residents in rebel-held zones where separatists are fighting with the Ukrainian government.

The Russia-Ukraine tensions have been a headache for investors for months now. Russia is Europe’s biggest supplier of energy and is a major trade partner for the continent. The European Union has placed sanctions on Russia, which has lowered the amount of trade between Russia and the eurozone’s countries.

U.S. government bond prices were little changed, a sign that investors were hesitant to make any large bets after Yellen’s speech. The yield on the 10-year Treasury note edged down to 2.40 percent.

• Gap jumped $2.25, or 5 percent, to $45.43. Gap said its profits rose 10 percent in the second quarter, helped by lower expenses and higher sales. The company also said it plans to expand in India.

• Another clothing chain, Aeropostale, was not as fortunate. The company reported a loss for the quarter and cut its full-year sales outlook. Aeropostale plunged 39 cents, or 10 percent, to $3.52.