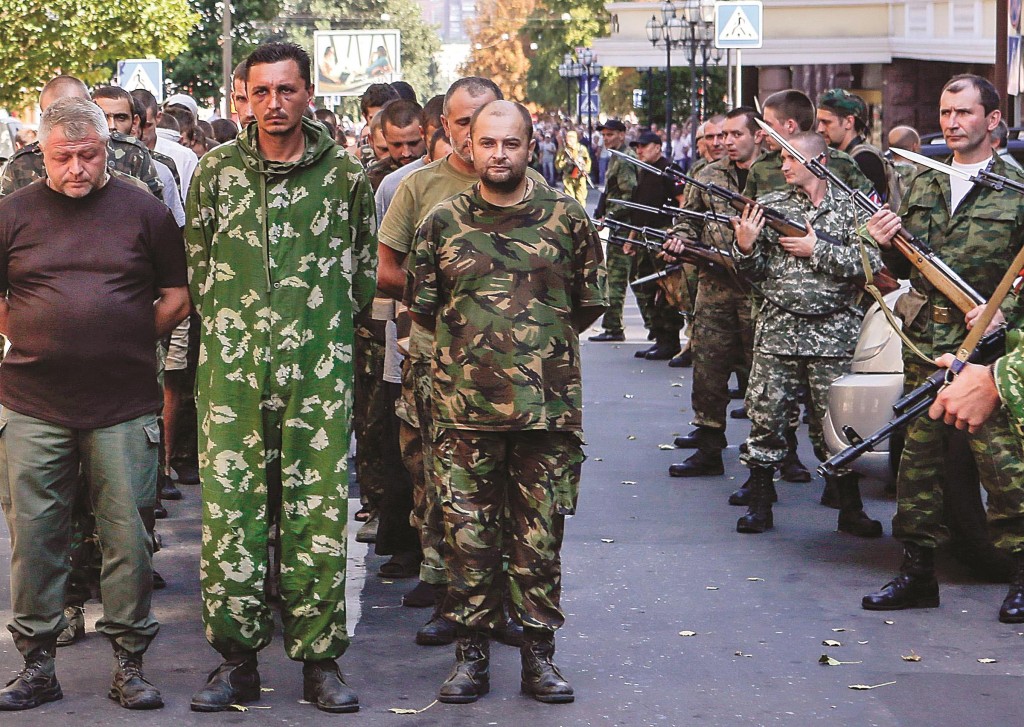 To shouts of “Fascists!” and “Hang them from a tree!” captured Ukrainian soldiers were paraded through the streets of the rebel stronghold of Donetsk on Sunday as bystanders pelted them with eggs, water bottles and tomatoes.

The spectacle of the bruised and filthy soldiers being marched hands bound and surrounded by gun-toting pro-Russian insurgents came as Ukrainians in Kiev celebrated their country’s independence from the Soviet Union — a stark display of the growing divisions between east and west.

While support and mobilization for Kiev’s campaign against the separatists has grown in many parts of the country, resentments fester in much of the east, where civilian casualties and shelling have become a part of daily life.

Rachel Denber of the New York-based rights group cited an article of the Geneva Conventions that prohibits “outrages upon personal dignity, in particular humiliating and degrading treatment” of captives of armed conflicts.

This parade is a clear violation of that absolute prohibition, and may be considered a war crime, she said.

On Sunday, rebels put several fire-blackened, shrapnel-shredded Ukrainian military vehicles on display in Donetsk’s main square, where supporters posed for photos in front of one of the destroyed tanks. One onlooker grabbed a Ukrainian flag from the wreckage of one tank and threw it to the ground. Several others trampled on it, wiping their feet and spitting.

The situation is even direr in Luhansk, a city closer to the Russian border whose war-reduced population of a quarter-million people has suffered under constant fighting in recent weeks. Andriy Lysenko, spokesman for the Ukrainian National Security Council, told journalists Sunday that 68 civilians had been wounded there in the past 24 hours, but could not confirm whether anyone had been killed.

Ukrainian president Poroshenko and his Russian counterpart Vladimir Putin are set to meet Tuesday in Minsk, Belarus, alongside other European Union leaders. The two leaders have not met since early June and many hope that the talks could help defuse the conflict in east Ukraine.

But German Chancellor Angela Merkel on Sunday cautioned against expectations of a decisive breakthrough at the much-anticipated meeting.

“The meeting in Minsk certainly won’t yet bring the breakthrough,” she said. “But you have to speak to one another if you want to find solutions.”