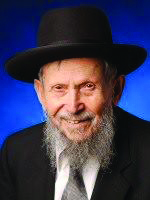 Tuesday, 22 Av, Klal Yisrael lost one of the last remaining links to the pre-war Lithuanian Gedolei Torah with the passing of Harav Gershon Yankelewitz, at 104. He delivered shiurim in Yeshivas Rabbi Yitzchok Elchonon for the last 60 years.

Harav Yankelevitz was born in 1909 in Lubcza, Poland, to Rabbi Dovid and Bunia Yankelowitz, Hy”d, both of whom perished in the Holocaust.  He first studied under Harav Elchonon Wasserman, zt”l, before going on to the famed Yeshivah of Radin. There he merited to bask in the light of the Chofetz Chaim, whom he referred to as “der Rebbe” for the rest of his life.

Only a few years ago, while baking matzos, to the dismay of the bakery staff Harav Yankelovitz insisted on pouring the water into the flour himself. When pressed as to why he was so insistent he responded, “That’s what der Rebbe [the Chofetz Chaim] did.”

Going on to the Mirrer Yeshivah, Harav Yankelevitz merited a connection to Harav Yeruchem Levovitz, zt”l, whose mussar lessons would have a profound impact on him. With the outbreak of World War II, he fled with the yeshivah to Kobe, Japan, and from there to Shanghai, where he remained until immigrating to the United States in 1947.

Harav Yankelewitz’s diligence in learning was extraordinary. He could sit at a sefer for hours, without any interruptions. He loved spending long hours conversing with talmidei chachamim about Shas and Poskim.

At the same time, he enjoyed deep, meaningful relationships with all sorts of people, great and simple. His genuine ahavas Yisrael defined his being. He greeted everybody warmly and was a true friend to neighbors and fellow congregants at the Young Israel of Pelham Parkway in the Bronx, where he davened for the past 60 years.

The most important thing to Harav Yankelewitz was teaching Torah. He passed up several offers of rabbinic pulpits, for fear it would distract him from his talmidim. He came every day to Yeshivah University’s campus — until a few years ago by bus — to deliver his shiur, keeping it up until a few days before his passing. He remembered every talmid, their families, and their life stories.

Harav Yankelewitz delivered a shiur in Mishnayos between Minchah and Maariv in his shul.  The shiur began with a group of European survivors, many of whom had studied in venerated yeshivos. As the years went by, though, the shiur’s auditors were American-born Jews, many of whom had very little background in learning. Harav Yankelewitz always gave his shiur in a way that could be completely understood by all who were sitting around the table.

His presence exuded tznius and pashtus. If anybody in shul asked him a halachic question, he would point to the Rav and suggest that he be asked.   Invariably, Rabbi Rubin, the Rav of the Young Israel of Pelham Parkway for many years, would direct the questioner back to Harav Yankelowitz.