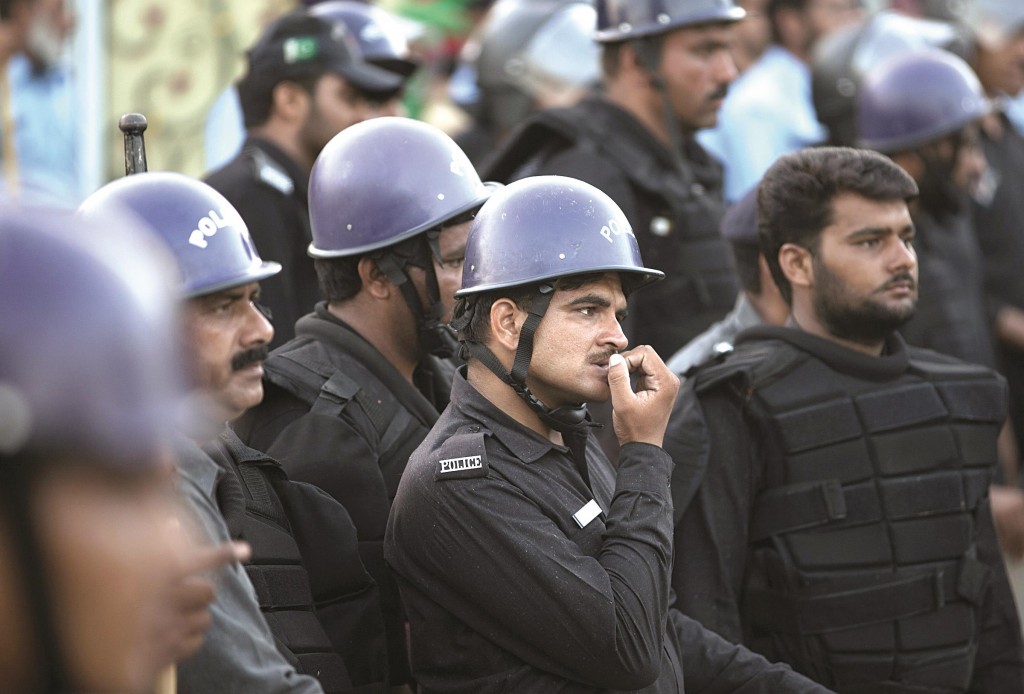 Government authorities had warned they would not allow protesters to enter Islamabad’s “Red Zone,” but the demonstrators met no immediate resistance from police or the hundreds of troops guarding the buildings.

Wearing masks and carrying makeshift shields, they hammered through barbed wire and locks connecting shipping containers that had been erected as a barrier around the zone, which also holds the president’s and prime minister’s ceremonial homes and many diplomatic posts.

A government minister, Saad Rafiq, said the prime minister allowed the protesters to enter the sensitive area to avoid bloodshed.

The Pakistani army warned the protesters against entering parliament or any other installation. It called on all sides to resolve the situation through discussion.

Men, women and children took part in the protest by some 30,000 supporters of opposition candidate Imran Khan and anti-government cleric Tahir-ul-Qadri.

Both men have called on Sharif to step down over allegations of fraud in last year’s election. Sharif has refused and ordered the soldiers out into the streets, the first such military deployment in the capital under any civilian government in Pakistani history.

Two Pakistani security officials said 700 troops had been deployed to guard the Red Zone. They spoke on condition of anonymity because they were not allowed to speak publicly about troop movements. An additional 30,000 members of the country’s security forces were also deployed in the capital, authorities said.

The protesters “want blood. They want dead bodies. That’s their politics,” Information Minister Pervaiz Rashid said. “If anything happen, the protesters will be held responsible.”

The demonstrators have camped out in Islamabad in two rallies since last week. Khan and Qadri have vowed to keep up the sit-ins until Sharif resigns.

Khan said Tuesday that his supporters would make a “Tahrir Square” outside parliament, referring to the square in Egypt where mass protests in 2011 brought down President Hosni Mubarak.

“Let us promise that we will remain peaceful,” Qadri urged followers. Khan told supporters: “No one will trespass into any building.”

Sharif has agreed to set up a judicial commission to investigate allegations that his Pakistan Muslim League-N rigged the elections.

The standoff has raised fears of political instability in this nuclear-armed country of 180 million, which has largely been ruled by dictators since independence in 1947. Both opposition leaders picked Pakistan’s Independence Day to begin their marches.

The military has also bristled at accusations that its powerful spy chief was behind an assassination attempt against a powerful media anchor.

In Washington, State Dep’t spokeswoman Marie Harf said: “We urge all sides to refrain from violence, exercise restraint and respect the rule of law.”

The Islamabad rallies come as Pakistan’s military wages a major operation against terrorists. The military said it carried out airstrikes Tuesday in the Khyber and North Wazristan tribal region that killed 48 militants.

Pakistan’s tribal regions are off-limits to journalists, making it difficult to verify such claims.