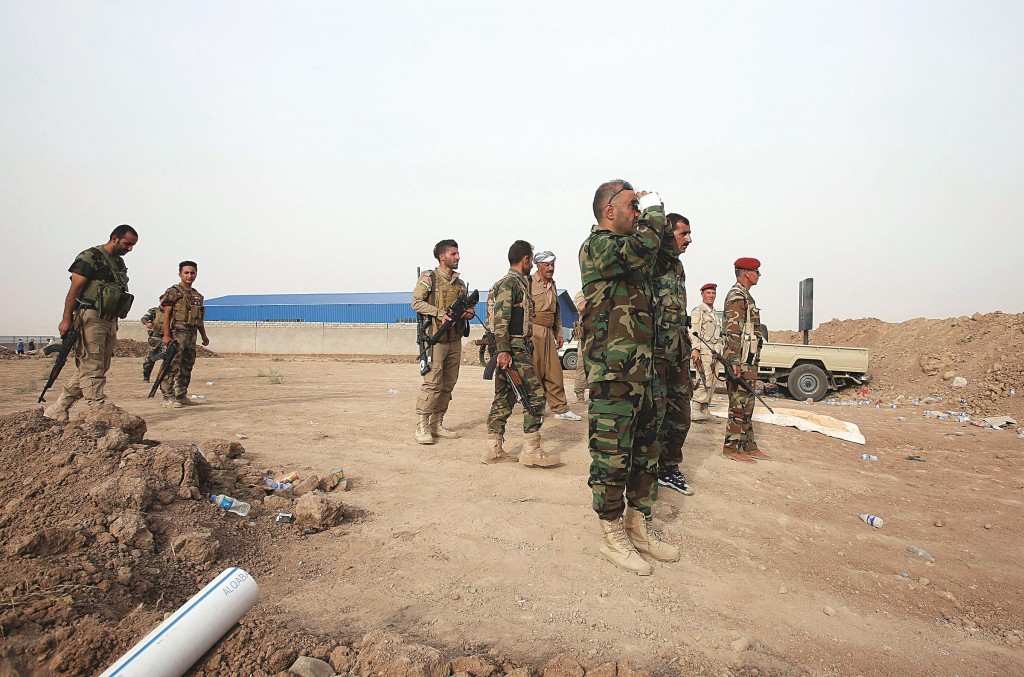 Iraqi forces halted a short-lived offensive on Tuesday to recapture Tikrit, home town of executed dictator Saddam Hussein, due to fierce resistance from Islamic state fighters who have also threatened to attack Americans “in any place.”

In Geneva, the United Nations refugee agency announced a major aid operation to get supplies to more than half a million people displaced by fighting in northern Iraq.

Buoyed by an operation to recapture a strategic dam from the jihadists after two months of setbacks, Iraqi army units backed by Shi’ite militias launched their offensive shortly after dawn on Tikrit, a city 80 miles north of Baghdad which is a stronghold of the Sunni Muslim minority.

But officers in the Iraqi forces’ operations room said by mid-afternoon that the advance had stopped.

South of Tikrit, the government side came under heavy machinegun and mortar fire from the insurgents, a group of Arab and foreign fighters hardened by battle both in Iraq and over the border in Syria’s civil war, the officers told Reuters.

To the west, landmines and snipers frustrated efforts to get closer to the city center in the latest in a series of attempts to drive out the insurgents. Residents of central Tikrit said by telephone that Islamic State fighters were firmly in control of their positions and patrolling the main streets.

Sunni Muslim fighters led by the Islamic State swept through much of northern and western Iraq in June, capturing the Sunni cities of Tikrit and Mosul as well as the Mosul dam, a fragile structure which controls water and power supplies to millions of people down the Tigris river valley.

However, on Monday fighters from Iraq’s Kurdish autonomous region said they had regained control of the hydro- electric dam with the help of U.S. air strikes. U.S. President Barack Obama also announced that the dam had been retaken.

The Islamic State has concentrated on taking territory for its self-proclaimed caliphate both in Syria, where it is also fighting the forces of President Bashar al-Assad, and in Iraq. Unlike al-Qaida, the movement from which it split, it has so far steered clear of attacking Western targets in or outside the region.

However, a video posted on the internet warned Americans, in English, that “we will drown all of you in blood” if U.S. air strikes hit Islamic State fighters. The video also showed a photograph of an American who was beheaded during the U.S. occupation of Iraq that followed Saddam’s overthrow in 2003.

Coinciding with the Kurdish advances, Damascus government forces have stepped up air strikes on Islamic State positions in and around the city of Raqqa — its stronghold in eastern Syria.

Analysts believe Assad — who is firmly in control in the capital more than three years into the civil war — is seizing the moment to show his potential value to Western states that backed the uprising against him but are now increasingly concerned by the Islamic State threat.

“The Syrians are meeting the Americans, or the West, halfway in the question of fighting terrorism, and are presenting themselves as a partner in combating terrorism,” said Salem Zahran, a Lebanese journalist with close ties to the Syrian government.

The Islamic State added new fighters in Syria at a record rate in July, according to the Syrian Observatory for Human Rights, which monitors the conflict. About 6,300 men — 80 percent of them Syrian and the rest foreigners — joined last month, Rami Abdelrahman, founder of the Observatory, told Reuters.

Trying to Turn the Tide

Obama said he acted to protect Americans and prevent a genocide in a conflict that has forced hundreds of thousands of Iraqis to flee their homes, including from the Yazidi and Christian religious minorities.

The stalled Tikrit offensive marked a setback in Baghdad’s attempts to turn the tide after the Kurds said they had taken the dam, easing fears that the militants could cut off electricity and water supplies, or even breach the structure, causing huge loss of life and damage down the Tigris.

The Islamic State’s successes since June have alarmed governments both in the West and in the region.

Saudi Arabia’s Grand Mufti Sheikh Abdulaziz Al al-Sheikh, the highest religious authority in the country, said on Tuesday that the Islamic State and al- Qaida were “enemy number one of Islam” and not in any way part of the faith.

Efforts are underway in Baghdad to form a new government that will unite the majority Shi’ites with the Sunnis and Kurds in halting the Islamic State insurgency that threatened to tear the country apart.