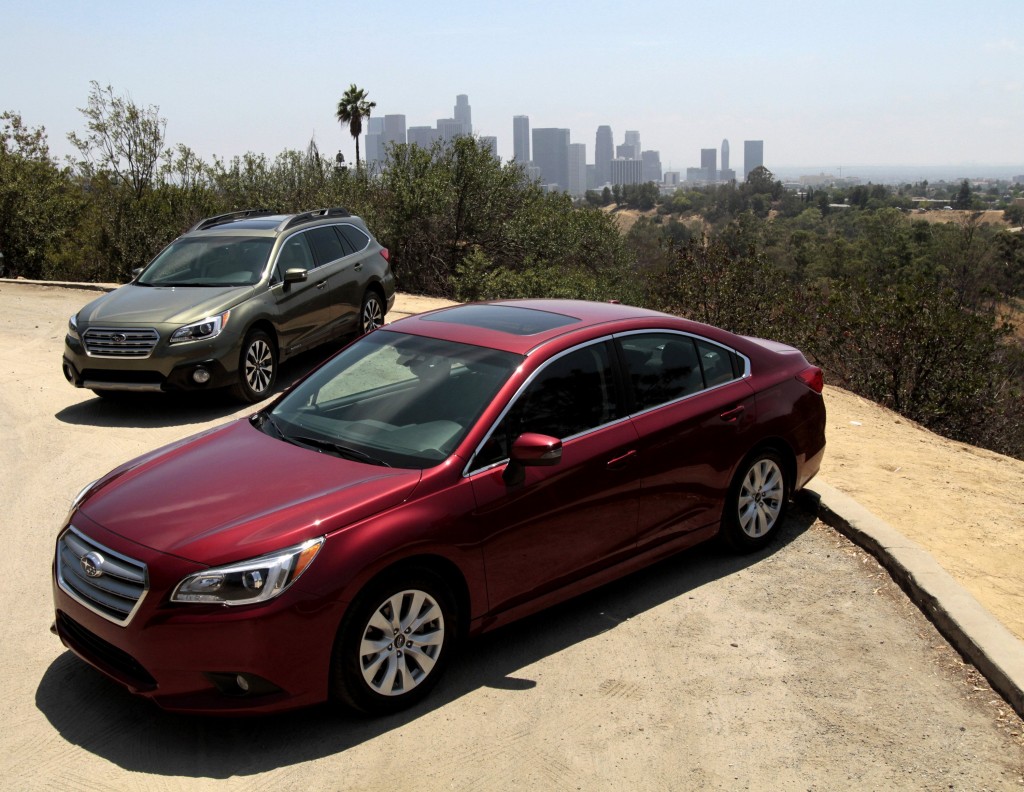 For decades, Subaru’s all-wheel-drive vehicles have delivered people to the trail head, campground and ski slope safely. Now, the brand is turning to technology to give drivers an extra measure of security.

The popular brand — among the fastest-growing automakers — is arming its two hottest-selling models, the Legacy and Outback, with an impressive array of safety features at tantalizing prices. For $1,200, drivers can add adaptive cruise control, lane-departure warning, blind-spot monitoring and pre-collision braking.

Those features, which together give a glimpse into the future of self-driving cars, can cost thousands more on luxury cars. They should appeal to the safety-minded buyers of the brand’s mid-size Legacy sedan and its dirt-seeking cousin, the Outback wagon. Both redesigned for 2015, the pair also feature cleaner designs, an updated engine and more refined road manners.

The smart packaging should further aid Subaru’s bid to sustain its recent sales gains. Once a niche maker of oddball vehicles, Subaru now outsells Volkswagen and is gaining ground on the major Asian brands.

In the last five years, Subaru has almost doubled its sales in the U.S., and it’s done so while offering far fewer dealer incentives than most automakers, according to Edmunds.com. Sales are up 16 percent for the first six months of 2014.

Those safety features offered in the new Legacy and Outback are notably not available, at any price, on its mid-size competitors, including bestsellers such as the Honda Accord, Toyota Camry and Nissan Altima.

Then there are the new air bags. Instead of inflating at the knees for the driver and front passenger, they push the edge of the seat cushion up. Like a speed bump for your bottom, this keeps you in the seat rather than sliding forward, protecting the spine and pelvis. They’re two of eight total air bags that are standard on the Legacy and Outback.

Such features have Subaru confident that the cars will earn a coveted Top Safety Pick Plus designation from the Insurance Institute for Highway Safety this summer. They also show that Subaru is aggressively positioning itself as a safety leader for everyman cars.

Subaru has done a nice job with the rest of the Legacy and Outback, too.

Both get all-new sheet metal that’s more in line with Subaru’s better-selling competitors. While the outgoing style of each could generously be called quirky, the new look is handsome, if a little bland.

The cars look more expensive than they are, with the Legacy starting at $22,490 and the Outback at $25,690. Both models are bolted together in Lafayette, Ind.

Though Subaru didn’t change the size of either model, their profiles are more aerodynamic for better efficiency. The automaker also uses an aluminum hood and active grille shutters to help save drops of gas.

But it’s the engine that is the biggest fuel saver. The Legacy and Outback share a 2.5-liter, four-cylinder boxer engine. Power stays nearly the same as in the previous generation, with 175 horsepower and 174 pound-feet of torque.

That’s plenty in the Legacy. But the Outback carries 125 pounds to 150 pounds more of cladding and body. This adds up as a strain on its engine when you need an extra kick of passing power on the freeway.

Considering that Subaru likes to think of the Outback as an almost-luxury alternative to something like a Volvo XC70, a turbocharged four-cylinder should be standard these days. Subaru has exactly that engine elsewhere in its lineup — and on Japanese Outback models. The brand should do the same in the U.S. market.

For those with deeper pockets or something to tow, six-cylinder versions of the Legacy and Outback are still available for an additional $3,000.

The Legacy is now rated at 26 mpg in the city and 36 mpg on the highway, figures on par with many of its front-wheel-drive competitors. During 200 miles of mostly city driving, we averaged a combined 26 mpg.

The Outback is rated at 25 mpg in the city and 33 mpg on the highway. We averaged 25 mpg over another 200 miles of mostly city driving.

Both models come standard with a continuously variable automatic transmission with a manual mode and paddle shifters. This gearbox is good but not great; Subaru built in false shift points to make it feel like a traditional automatic. This works well enough, but the gearbox isn’t as refined as the one inside the Accord.

Turning inward, Subaru clearly worked hard to make the cabin a comfortable place. Anywhere an arm or elbow rests is soft, the back seat is cavernous and the standard touchscreen stereo system actually responds to your touches.

The cloth seats on the Legacy we tested could replace your couch, though the leather seats in the Outback were too wide and shapeless.

Visibility is excellent, and the ride quality is firm without being harsh. Potholes reveal the strength of the stiffer chassis. The Legacy lets in a little too much road noise, but it’s not a deal breaker. The Outback seemed to have an extra layer of sound-deadening woven in to counter this.

Subaru’s EyeSight safety system leads in ease of use as well as value. The system uses a pair of cameras mounted on either side of the rear-view mirror to scan the road in front of you.

The adaptive cruise control proved easy to use, and could even bring the car to a dead stop and then back up to speed in traffic. Each of the features can be turned off separately rather than disabling the whole lot.

We tested a Legacy 2.5i Premium with a moon roof, navigation system and the extra safety systems. That brought the total to $27,480 — still a bargain.

Things got fancier on the Outback. For $34,135, we had the 2.5i Limited with heated leather seats, navigation system, moon roof, the safety options, a Harman Kardon stereo system and 18-inch alloy wheels.

Both models offer better fuel economy, utility and looks — along with an even safer ride to that campground.

Times take: Does everything as well as its peers, and throws in AWD

Lows: A bit more road noise than we like; styling blends in too much

EPA fuel economy rating: 26 mpg in the city, 36 on the highway

Highs: As safe as the Legacy, with extra functionality

EPA fuel economy rating: 25 mpg in the city, 33 on the highway