Business The American Consumer Is Back, With an Asterisk
Business 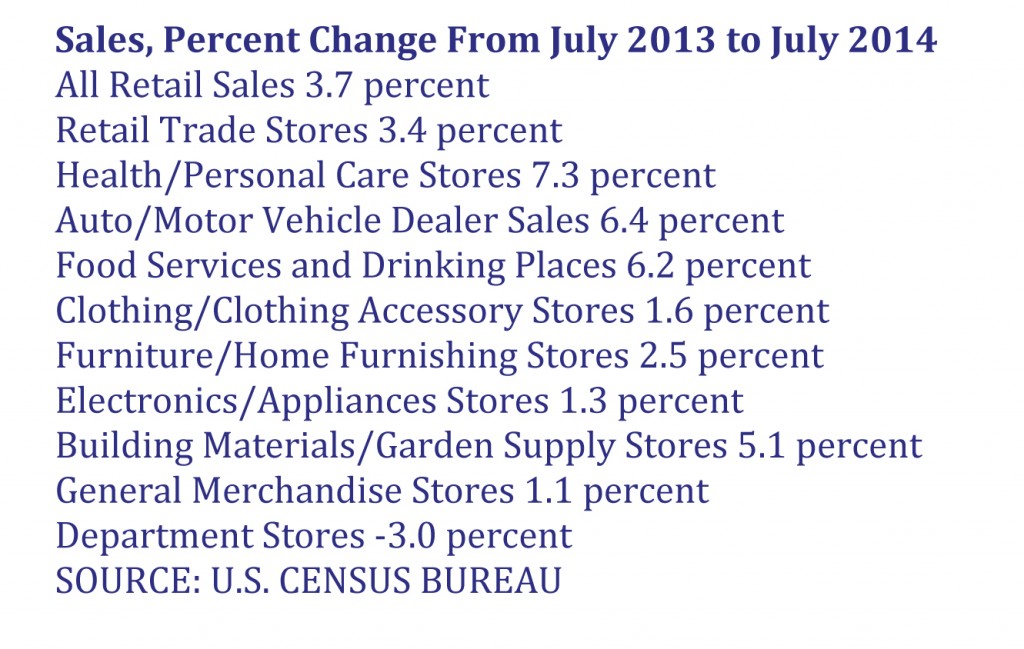 Written off in the aftermath of the Great Recession, the U.S. consumer is back. Not quite with a vengeance, but definitely back.

It’s noticeable to Marie Galvin, owner of GALVIN-ized in Boston, where handmade women’s hats – a discretionary purchase – sell for anywhere from $35 to $85.

“This year … it all seems out of control. Everybody was shopping for good hats,” said Galvin, who wears her wares on the sales floor. “I think it’s up a good 50 percent from last year.”

The same is true for Ron Lewis, owner of Designer Cabinetry in Newton, Mass., where his customers often spend $40,000 to $80,000 for high-end kitchen cabinets and appliances.

“It’s been a slow improvement until this year, where there has been a marked improvement,” said Lewis. “The people with money have more money than ever.”

Nationally, the story is largely the same, whether it’s in the finance-rich suburbs of Charlotte, N.C., the condos of Miami or the most populous state, California, where the jobless rate is falling. Consumption powers about two-thirds of all U.S. economic activity, and it’s noticeably back.

Spending by the rich never tailed off, and it accelerated alongside the soaring stock-market gains of recent years. On the bottom economic rungs, the poor still struggle. So much so that Dollar Tree and Family Dollar recently announced plans to merge to compete against Wal-Mart for what Family Dollar CEO Howard Levine called “a more financially constrained consumer.”

But across the broad middle of the income spectrum, a bevy of indicators shows that ordinary Americans feel better about the economy and are loosening the purse strings. The most obvious example is car sales, on pace to exceed 16.3 million this year.

“It gets better all the time, but it’s not even,” said Michelle Krebs, an analyst with AutoTrader.com.

July retail and food sales are 3.7 percent above July 2013 levels, the Census Bureau reported earlier this month, 6.4 percent higher for autos and other motor vehicles.

Rob Gagne, a longtime resident of the blue-collar Boston neighborhood of Dorchester, feels better about the economy. The jack-of-all-trades employee of an architectural firm is prototypical middle class. But he’s splurging on a $2,100 custom-made bed, and after several years of belt tightening, he recently treated himself to a cross-country motorcycle trip.

Jobs are another important signpost for future consumption.

There were 4.7 million job openings in June, the highest level since February 2001, and a signal that companies are more optimistic about their future and want to hire accordingly.

At the same time, roughly 2.5 million Americans quit their jobs last month, the highest since June 2008. That’s a good thing, because it means people feel confident they can take advantage of other job opportunities.

Another indicator is the Consumer Confidence Index, published monthly by The Conference Board, a business-research group.

The group finds that people’s confidence in their current situation is finally matching their traditional optimism about the future.

“This is the consumer saying … it finally has gotten better,” said Ken Goldstein, a veteran economist with the group.

The result? Goldstein said that pent-up consumer demand is about to be unleashed after several false starts.

Consumption would be even stronger if not for constraints. It’s growing an average of 2.2 percent a year since the recession ended in 2009. That’s healthy.

But it’s still below the 2.9 percent annual average in the previous economic expansion, from 2001 to 2007. People are still carrying a relatively high level of debt and can’t, or won’t, borrow more.

“That’s the reason why total spending is growing at a slower pace than people would have expected at this point – particularly since interest rates are so low,” said Kevin Logan, chief U.S. economist for HSBC Securities in New York. “It’s a big change of behavior.”

Many Americans also fret the lack of wage growth.

“People don’t believe their incomes are going to grow as fast as they did in the last cycle,” said Logan.

Wages are growing at an annual rate of about 2 percent, or about the same pace as inflation, so any gain in purchasing power has been offset by rising prices. Given a still-elevated unemployment rate, current workers can’t demand higher pay and further boost spending.

And consumers also remain wary after being burned in the Great Recession.

“Even though it is several years ago, it has a lasting effect,” said Jack Kleinhenz, chief economist for the National Retail Federation, who added that “the ‘shop until you drop’ kind of thing, people aren’t in that kind of mode anymore.”

It’s not to say consumers aren’t spending – they are – but not with abandon.

It’s noticeable at Boston’s famous SoWa Open Market, where farmers, artists and merchants compete for dollars in a crowded outdoor market. For the past two years, Matthew MacNeil and business partner Justin Toggle have sold handmade ties, bow ties, dress shirts and luxury travel bags there under their brand name, J. Louis Clothing. Men are beginning to treat themselves again, the pair said.

“It’s kind of like a treat to him. We weren’t really seeing that in the beginning,” said MacNeil, who says $25 handmade ties and bow ties are now moving briskly. “I’m seeing a lot more of that. Not so much the $125 shirt or the $175 bag.”

Business is picking up at The Chocolate Truffle in Reading, Mass., welcome news for owner Erin Calvo-Bacci, who had to close two of her three shops after the Great Recession. Customers are buying again, but in smaller quantities of her handmade chocolates than they did before the crisis.

“Sales may be increasing, but that doesn’t mean profits are, because of all the other costs,” she said, adding, “Would that make me want to open up two other stores again? No way!”