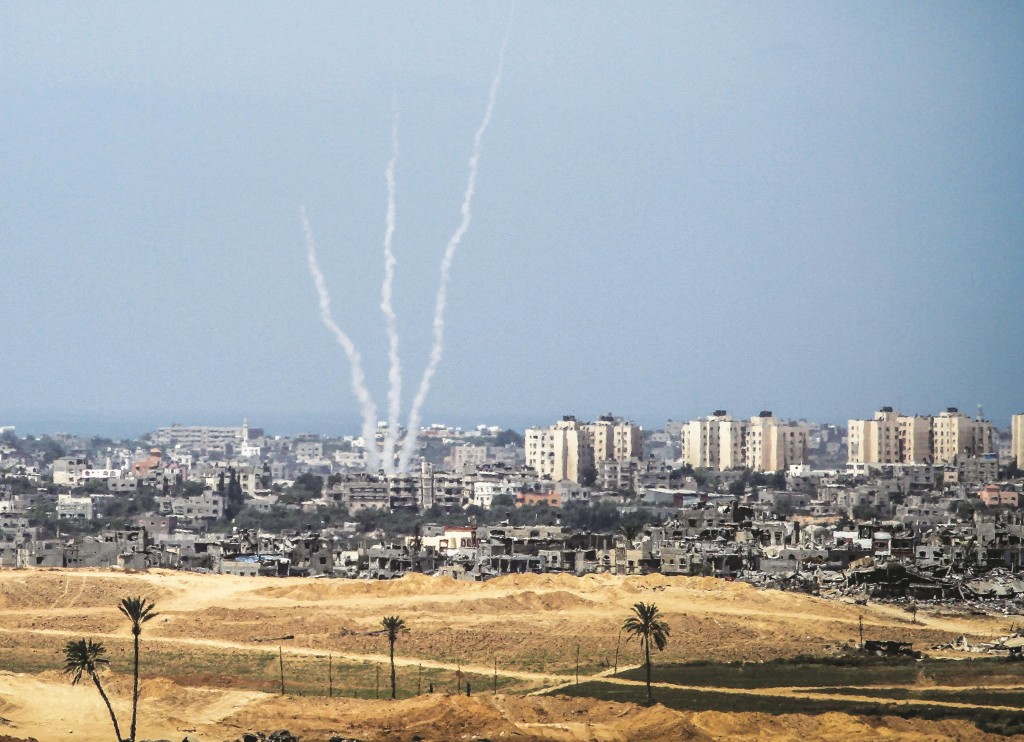 At the end of a long day of rocket barrages from Gaza, Israeli Prime Minister Binyamin Netanyahu addressed the nation and made it official: “Operation Protective Edge is not over.”

Since the collapse of the ceasefire Tuesday night, Palestinian terrorists launched more than 200 rockets — the highest number since beginning of the fighting — and Israel responded with air strikes on 110 targets, including the destruction of 3 terrorist cells.

The Palestinians fired a long-range Iranian Fajar missile for the first time.

Air raid sirens wailed in southern Israeli cities on Wednesday. There were no reports of injuries.

Wednesday afternoon, a rocket fired from Gaza hit the home of the Messer family in southern Israel, causing damage to the home but no injuries. B’chasdei Shamayim, the family, including a baby, had evacuated just before the rocket landed.

As to the question of when it will be over, now that Egyptian-mediated talks have failed, Netanyahu fell back on a policy of retaliation and deterrence:

“Our policy regarding Hamas is simple: If you fire, we will hit back. They think they will exhaust us, but they are wrong,” Netanyahu said, and urged the people stay “united” and “brave” for the trials ahead.

Some 2,000 reserve soldiers who were sent home two weeks ago when a shaky series of ceasefires began, were called up for duty again on Wednesday, the military said, and officials said the current phase will be even more intensive than before.

There were conflicting reports on Wednesday afternoon concerning the fate of Muhammad Deif, the head of Hamas’ armed wing, who may have been killed in an IDF airstrike on Tuesday night.

Israeli officials were quoted by Fox News saying that Deif was believed to have been killed in the airstrike. Hamas, however, denied that Deif was killed but threatened revenge for the attempted assassination, which did kill his wife and son.

According to intelligence reports, Deif, who had been hiding out underground during Operation Protective Edge, emerged on Tuesday night and headed for the house of the Hamas rocket commander, where he had arranged to meet his wife.

However, he was under surveillance, and shortly after Deif arrived there, an Israeli missile hit the house. Deif’s wife and child were killed, and another body, possibly that of the terrorist, was also found. It marked the fourth time that Israel has targeted Deif.

Netanyahu would not confirm or deny targeting Deif at the Wednesday night press conference, saying only, “Not only are Hamas leaders legitimate targets, they are a top priority. No one is immune.”

Science Minister Yaakov Peri, a former director of the General Security Service, said he doesn’t have any details about Deif but that his house would have only been hit for a reason. “If there was intelligence information that Mohammed Deif was not at home, then the house would not have been blown up,” he told Army Radio.

In contrast to prior diplomacy breakdowns, the United States eschewed even-handedness this time and unequivocally assigned blame for the return to violence on Hamas.

On Wednesday night, Netanyahu denied recent news stories about tensions with Washington being at “an all-time high.”

“There is no crisis with the U.S. I spoke with Kerry and we had a very good conversation. We also spoke yesterday and the day before. I have spoken with Obama a number of times. The relations are stronger than it what is being said. We received support and I praise Obama for it.”

In addition, he thanked the U.S. for giving Israel the emergency funds it requested for Iron Dome batteries and praised their support for a demilitarized Gaza.

The Egyptian Foreign Ministry expressed “deep regret” over the breaking of the ceasefire. It said in a statement that it “continues bilateral contacts” with both sides aimed at restoring calm and securing a lasting truce that “serves the interest of the Palestinian people, especially in relation to the opening of the crossings and reconstruction.”

Hamas said it fired two rockets at an Israeli gas installation about 19 miles off the coast of Gaza on Wednesday in the first apparent attack of its kind. The IDF said no missiles had struck any gas platforms at sea.

Critical of Netanyahu’s handling of the situation, Lieberman said in an online posting: “I hope that it is now clear to everyone that the policy of ‘quiet will be met with quiet’ means that Hamas is the one that takes the initiative and the one that decides when, where, and how many rockets it fires on Israeli civilians, while we make do with reacting. Even if our reaction is a strong, it is still a reaction.”

“The proposals we have heard up until now, whereby there is no deal, no agreement, and no unequivocal commitment by the Palestinians to halt their fire forever means that we are in for a war of attrition, which is something that the state of Israel cannot be dragged into.”

Lieberman has been urging a determined military campaign to rid the Gaza Strip of Hamas, once and for all.

“Even if, Heaven forbid, [Meretz chief] Zehava Gal-On were prime minister and [Hadash MK] Dov Henin were defense minister, they, too, would ultimately order a wide-scale military operation to topple the Hamas regime,” Lieberman wrote.

“Lieberman is trying to sell us the delusion of liquidating Hamas for years now,” the Meretz chairperson said. “If the residents of the South are still vulnerable to rocket fire and shelling after a month of destruction and killing in the Gaza Strip, then apparently this operation didn’t change anything, and no military operation will change it.”

Justice Minister Tzipi Livni was also critical of Netanyahu’s policies, but offered a different solution. She told Ynet that the attempt to reach an arrangement with Hamas was “not right,” and that she was not willing to “pay Hamas,” or “establish Hamastan on our southern border that will send a message to Islamic State (IS), and Hizbullah, and all the other crazy groups in the region that we will be pay a price for quiet.”

Livni says she favors working with the U.S., EU, U.N. and the Palestinian Authority to create a different reality inside Gaza that would include demilitarization, massive humanitarian aid, and eventually transferring control of the Gaza Strip to the PA.

Netanyahu tried to rein in his outspoken coalition partners on Wednesday night. At the press conference, he recalled that as a cabinet member under prime minister Ariel Sharon and, even when he was opposition leader during prime minister Ehud Olmert’s tenure, he did not publicly criticize them during crises such as this.

“My advice is to do what I did: Lend a hand and speak less,” Netanyahu said.