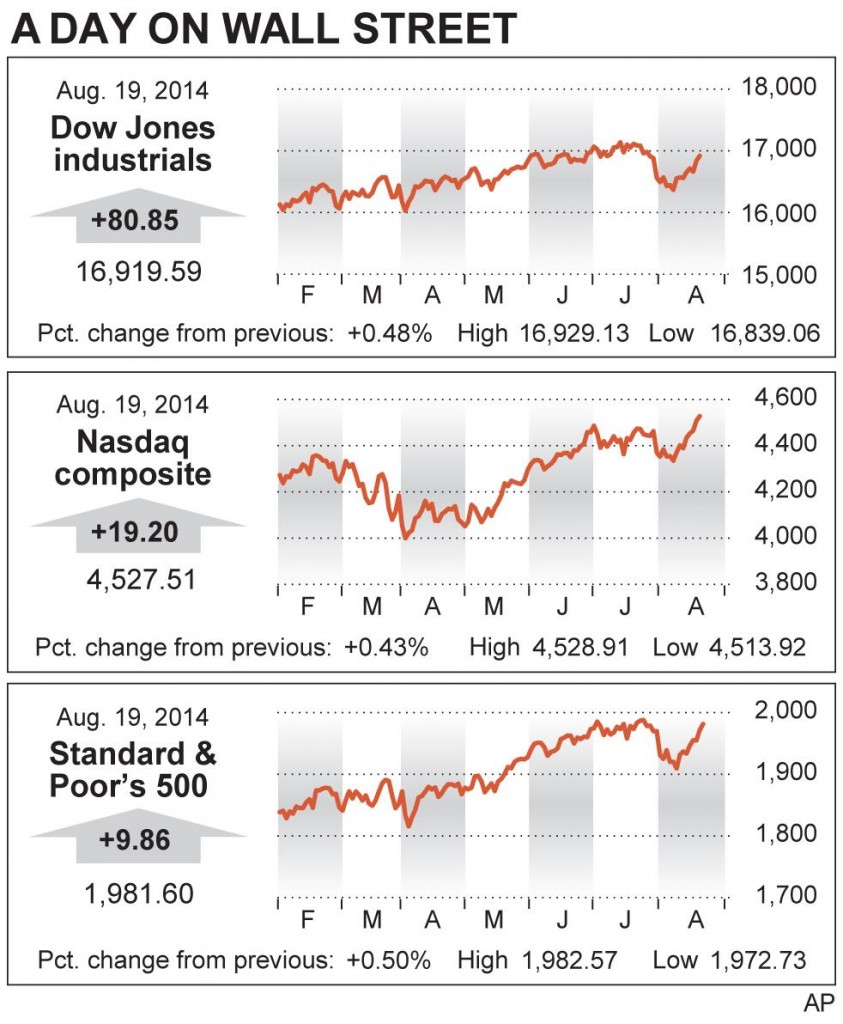 A summer swoon for the stock market appears to be over for now.

The Standard & Poor’s 500 index closed within six points of its all-time high Tuesday, less than two weeks after slumping on concerns about rising tensions in Iraq and Ukraine.

Investors were encouraged by economic reports that suggested growth may be poised to pick up, while inflation remains subdued. A pair of company earnings reports also hinted that consumers are getting more confident and spending more.

“The economic reports … have been coming out better than expected,” said Robert Pavlik, Chief Market Strategist at Banyan Partners. “There’s been a shift in the focus of investors away from some of the geopolitical events.”

TJX, the parent company of T.J. Maxx, Marshalls and other stores, was the biggest gainer in the S&P 500 on Tuesday. The company’s stock rose $4.66, or 8.6 percent, to $58.56 after it reported that its quarterly income climbed 8 percent as sales strengthened in the U.S. and abroad. The results beat the estimates of Wall Street analysts. TJX also lifted its full-year earnings forecast.

Home Depot jumped $4.64, or 5.6 percent, to $88.23 after the company said its quarterly income surged 14 percent. Spring is the biggest season for home-improvement retailers as homeowners work on their yards and gardens. Home Depot has also been helped by an improving housing market.

“Home Depot’s earnings give you a measure of confidence in housing, to an extent, and a measure of retail confidence,” said JJ Kinahan, chief strategist at TD Ameritrade. “Those are two areas where we like to look to see how the consumer is really feeling.”

After rising to a record in July, stocks slumped in the first week of August. The S&P 500 index fell as much as 4 percent from its record close to 1,909.57 on August 7, as investors worried about tensions between Russia and the West over Ukraine and the implications for global growth.

A report that showed inflation remains subdued also gave stocks a lift Tuesday. U.S. consumer prices rose in July at the slowest pace in five months, held back by a drop in gasoline prices. Consumer prices edged up 0.1 percent, after larger gains of 0.3 percent in June and 0.4 percent in May. If inflation remains constrained, investors judge that the Federal Reserve will be able keep its key interest rate low for longer.

The Fed is currently winding down its economic stimulus but hasn’t yet said when it will start raising interest rates.

Beauty products company Elizabeth Arden was one of the big losers on Tuesday. The company slumped after reporting lower sales and a loss that was bigger than analysts had expected. The company said the decline in sales of celebrity fragrances was steeper than had been anticipated. Arden’s stock dropped $4.56, or 23 percent, to $15.05.