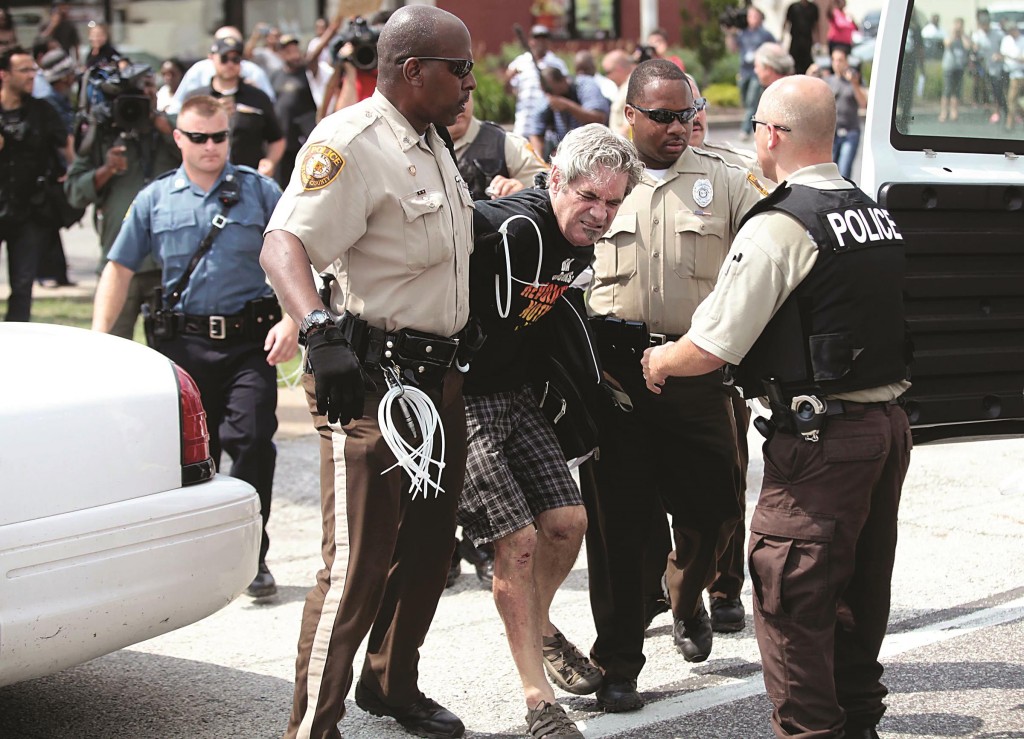 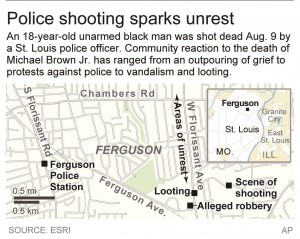 Missouri Governor Jay Nixon lifted the curfew for the St. Louis suburb of Ferguson on Monday and began deploying National Guard troops to help quell days of rioting and protests spurred by the fatal shooting of a black unarmed teenager by a white policeman.

Nixon said the National Guard, which he called in after declaring a state of emergency over the weekend, would fall under the supervision of the Missouri Highway Patrol.

The governor had declared a state of emergency for the town on Saturday and ordered that the streets be cleared for a curfew that ran from midnight to 5 a.m.

“We will not use a curfew tonight,” Nixon said in a statement, hours after he ordered the Missouri National Guard to “restore peace” to Ferguson.

But retired local business owner Marshall Tucker said: “It ain’t getting no better with the National Guard coming in.”

A postmortem conducted on behalf of the family of Michael Brown showed he was shot at least six times. The path of one bullet indicates the 18-year-old Brown may have been lowering his head in surrender when the fatal shot hit, according to Brown family attorney Daryl Parks.

President Obama was meeting with Attorney General Eric Holder on Monday afternoon to discuss the Ferguson unrest, his office said. The Department of Justice, the FBI and the St. Louis County Police are investigating the shooting.

Federal officials completed their postmorten exam of Brown on Monday, according to Suzanne McCune, a spokeswoman for the county medical examiner. She said the county procedure was completed and the results given to the county prosecutor’s office, but she would not provide details other than to say the cause of death was gunshot wounds to the head and chest.

The postmortem for the family, Parks told a news conference, showed one bullet hit Brown in the “very top of his head” and another hit his right eye.

“His head was in a downward position,” Parks said. “Given those kind of facts, this officer should have been arrested,” Parks said.

Darren Wilson, 28, the police officer who shot Brown as he was walking through a Ferguson residential neighborhood on Aug. 9, was put on paid administrative leave while the case is investigated.

The private postmortem showed Brown’s body had no signs of a struggle with the officer and that there was no gunshot residue on the body, indicating Brown was probably at least a few feet away from the gun when he was shot.

The lawyers said they did not yet have access to clothing that might show gunshot residue, x-rays taken when the county did the first postmortem on Brown’s body, or toxicology results, which the county has so far not released.

The Washington Post cited an anonymous source saying that Brown had drugs in his system.

Each night since the shooting, demonstrators have been walking the streets around the three-story apartment buildings where Brown died.

The protests have been punctuated by rioting and looting, leaving some stores badly damaged.

Law enforcement officials have been widely criticized for using excessive force on protesters. Amnesty International USA sent a 13-person human rights delegation to seek meetings with officials in the area and to train local activists in methods of non-violent protest.

Wilson remains in hiding, and police say he has been threatened. An online petition calls for his firing.

According to accounts by local police, Brown and his friend were walking down the middle of the road when Wilson asked them move onto the sidewalk. Wilson reported that Brown reached into his patrol car and struggled for his service gun when Wilson fired the initial shot.

Brown’s friend Dorian Johnson, 22, who was with Brown when he was shot, said Wilson had reached out through his car window to grab at Brown and that the teenager was trying to get away when he was shot. Johnson said Brown held up his hands in a sign of surrender but that Wilson got out of his patrol car and shot him several more times.

Police Chief Tom Jackson raised the ire of the Brown family and its supporters for releasing police reports showing that the teen was a suspect in the theft of cigars from a neighborhood convenience mart. The family called that a smear campaign.

Jackson said later the officer did not know Brown was a robbery suspect when he shot Brown and that the incident was tied only to Wilson’s request that he move out of the street.