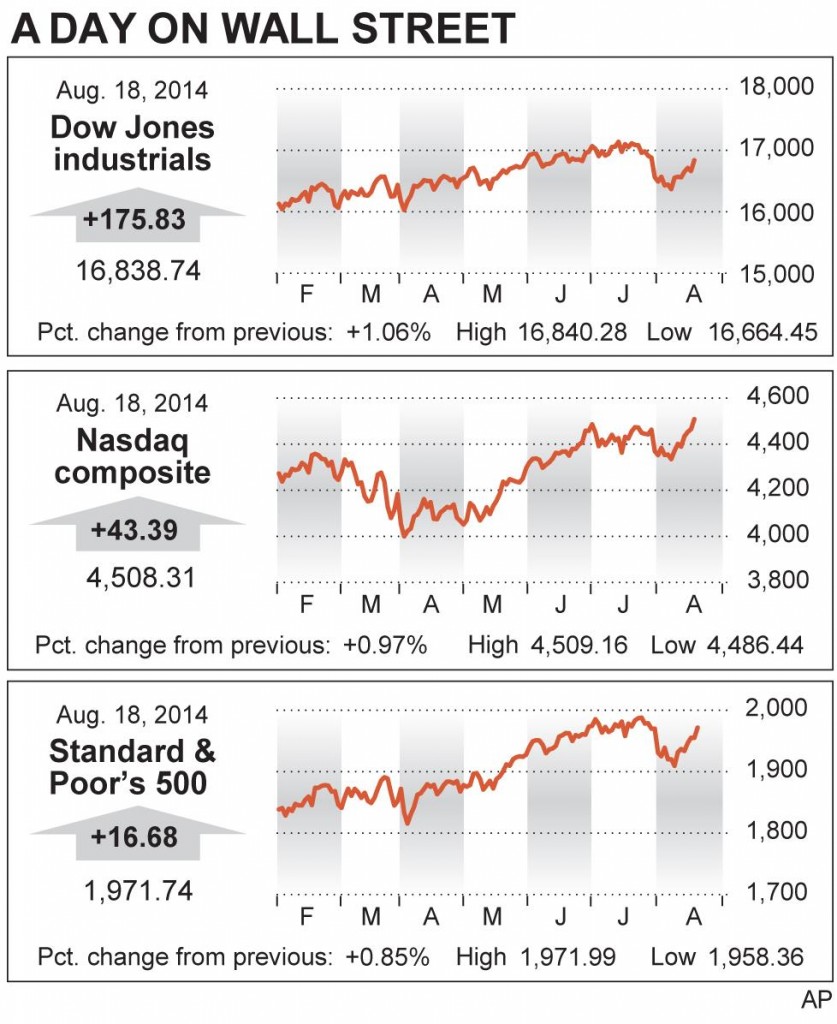 Corporate deal news gave the U.S. stock market a lift on Monday as a bidding contest erupted for a discount retailer. Stocks also climbed amid reports of diplomatic efforts to broker a cease-fire in the conflict in Ukraine.

Dollar General jumped after making a bid for retailer Family Dollar, a rival discount store. The offer topped a bid made last month by Dollar Tree, another discount retailer. Airlines were also among the big gainers as the price of oil slumped.

The stock market is bouncing back after a bout of summer volatility pushed the Standard & Poor’s 500 down earlier this month to its lowest level since May. The index is now less than 1 percent below its record close of 1,987 reached on July 24. Investors had become skittish on concerns that the tensions between Russia and Ukraine were escalating.

“Investors are focusing back on earnings and fundamentals and not as worried about some of those geopolitical pressures right now,” said Chris Gaffney, a senior market strategist at Everbank Wealth Management.

Airline stocks were among the gainers as well after the price of oil fell to its lowest level since April as fears of supply disruptions from Iraq eased. Fuel is a big component of airlines’ costs.

Despite the increased volatility caused by the tensions in Ukraine and elsewhere, stocks are still an attractive investment, said Dan Curtin, a global investment specialist for JPMorgan Private Bank.

Inflation remains and low and corporate earnings remain strong. Earnings growth in the second quarter was 10.2 percent for companies in the S&P 500, compared to 4.9 percent in the same period a year ago and 3.4 percent in the first quarter, according to data from S&P Capital IQ.

Later this week investors will focus the Federal Reserve. Policy-makers are winding down their economic stimulus and will likely start to raise interest rates at some point next year.

On Wednesday, the Fed will release the minutes from its July policy meeting and on Friday Fed Chair Janet Yellen will give a speech at an annual conference of central bankers, policy experts and academics from around the world at Jackson Hole, Wyoming.

Yellen is expected to reaffirm her position that slack remains in the labor market and that the Fed will keep monetary policy loose to address the problem, said Katie Nixon, chief investment officer for Wealth Management at Northern Trust.

“The Federal Reserve is in no hurry to raise rates,” said Nixon. “We expect more of the same and think it will be very supportive to financial markets.”

Monster Beverage was the biggest decliner in the S&P 500 Monday. The stock fell $5.05, or 5 percent, to $88.44 after analysts at Jefferies cut their rating on the stock from “buy” to “hold.” Monster surged almost 22 percent Friday after Coca-Cola said it was buying a 16.7 percent stake in the company. The analysts at Jefferies say that Monster’s stock may now be fully valued after the gain.

In commodities trading, oil fell close to its lowest price since April after fears of supply disruptions from Iraq faded. That is removing much of the risk premium that had built up in May and June. Benchmark U.S. crude fell 94 cents, or 1 percent, to $96.41 a barrel in New York. It traded above $106 a barrel as recently as June 25.

Prices for U.S. government bonds fell. The yield on the 10-year Treasury note rose to 2.39 percent from 2.34 percent on Friday.