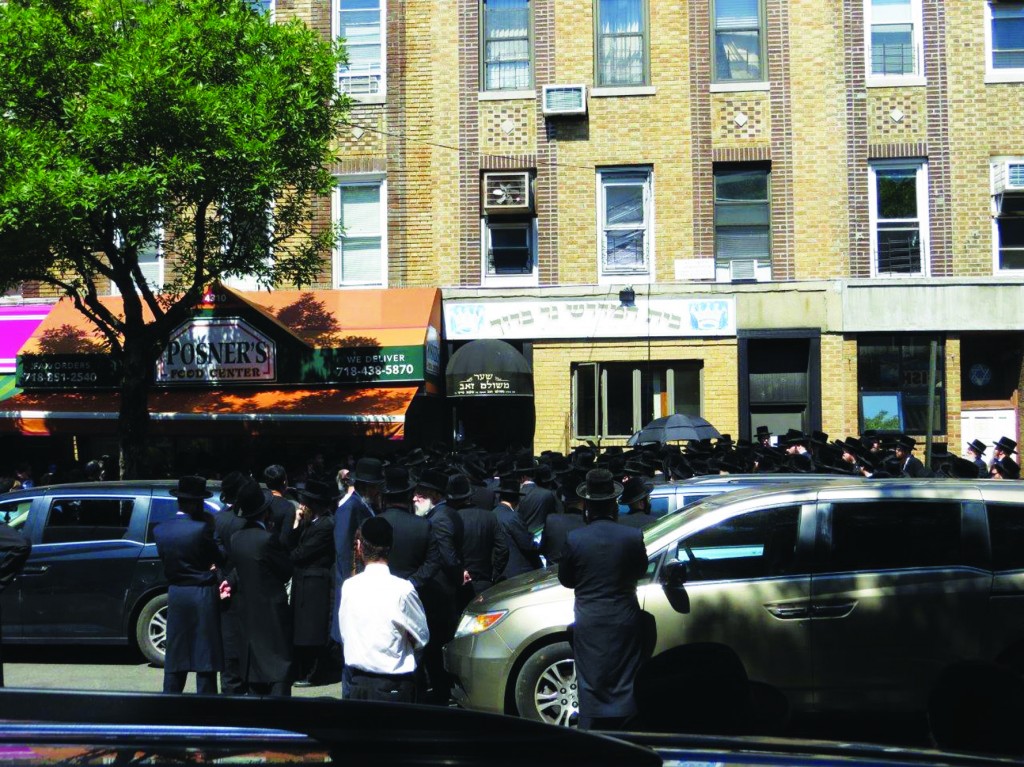 The Boro Park community was plunged into deep sadness and mourning over the tragic passing of Ahron Follman, a’’h, age three, who was niftar in a fire in the Maarah Yechezkel Bungalow colony. Friends, family and acquaintances were devastated, and as the news spread the entire community was deeply shaken.

“I don’t remember being at a levayah where I was so shaken,” said one relative. “When the tiny aron was carried in the whole crowd broke out in heavy, loud crying. To see the parents and siblings going through such suffering was so difficult. The father said the brachah Baruch Dayan HaEmes loudly, followed by his oldest son. It was heartbreaking and inspiring at the same time.”

Harav Yechezkel Roth, Karlsburger Rav, shlita, on whose beis din the boy’s father, Rabbi Avraham Shlomo Follman, serves as a Dayan, was the first maspid in the bungalow colony, followed by his son Harav Moshe Roth. Both spoke of Rabbi Follman’s great mesirus nefesh for Torah and the tremendous emunah and strength with which he faced this terrible calamity.

The Boro Park levayah was held at Khal Ner Baruch, Linz, which was founded by Harav Aharon Weider, Linzer Rav, zt”l, a great-grandfather of the niftar, after whom he was named.

“Like every ehrliche mother, she [Mrs. Follman] said Krias Shema with her child before he went to sleep,” wept Harav Greenwald. Who thought that it would be the Krias Shema before his petirah.

Rabbi Mordechai Follman, a grandfather of the niftar, implored, “Ahrele,” as the boy was known, to ask his great ancestors, the tzaddikim of Ropshitz, Tzanz and Bobov, to “go to the Kisei Hakavod and bring yeshuos for Klal Yisrael.”

“It is so terribly sad,” said Yidel Feit, who was among the first Hatzolah volunteers to respond to the scene. “I remember when I arrived and saw the fire I thought, chas v’shalom if anybody is in there.”

“Hatzolah and the state troopers responded in minutes, but unfortunately there was very little we could do,” said Feit. “The troopers tried very hard to get in, but they got pushed back by the heat and the fire. People were screaming and crying.”

According to an eyewitness, the fire broke out around 10:15 p.m., at the Maarah Yechezkel bungalow colony in Swan Lake, New York. Within minutes the fire was too out of control for anyone to approach the building.

An older child suffered minor burns and was rushed to the hospital.

“I went to the hospital to tell the family the terrible news,” said Rabbi Yaakov Klar, associate director of Crisis Intervention for Chai Lifeline. “Obviously, everybody is terribly brokenhearted. The director of the bungalow’s camp told me that he feels like he lost a son, R”l.

Rabbi Klar spoke to Hamodia from the grounds of Maarah Yechezkel, where he had returned to counsel children and parents on dealing with the tragedy.

Rabbi Klar said that children should be reassured and be made comfortable to share their feelings with parents.

“To the children we say that Hatzolah and the fire department did everything that they could. They should not be afraid. This was a not a normal occurrence.”