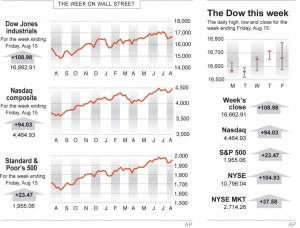 Renewed fighting in Ukraine rattled markets on Friday. Reports that Ukrainian forces attacked Russian military vehicles that had crossed the border knocked stock markets down in the afternoon and sent traders into the safety of U.S. government bonds.

By the end of the day, the Standard & Poor’s 500 index was back to where it started as investors realized that a wider conflict wasn’t underway.

John Canally, the chief economic strategist at LPL Financial, said it’s understandable that traders dropped stocks in response to the flare-up. “Anyone who doesn’t want to lose their job over the weekend sells first and asks questions later,” he said.

Canally suspects the dispute between Russia and Ukraine will likely follow the pattern of recent months. Worrying headlines will be followed by soothing speeches. “We’ve been here before,” he said.

The news crossed at mid-morning Eastern time that a column of Russian armored carriers had crossed into Ukraine late Thursday. Ukraine claimed that its artillery fire destroyed most of the vehicles, but Russia denied that it happened.

The yield on the 10-year Treasury note plunged as low as 2.30 percent, the lowest since June 2013, as traders seeking safety shifted money into U.S. government bonds. In late afternoon trading the yield climbed back to 2.34 percent, still down from 2.40 percent late Thursday.

Among companies in the news, Monster Beverage soared 30 percent after Coca-Cola announced plans to pay $2 billion for a stake in the maker of caffeinated drinks. The deal comes as Coca-Cola’s soda sales are slow and “energy drinks” have become popular. Monster jumped $21.84 to $93.49.

Supervalu, a grocery store chain, said hackers gained access to its computer network for handling credit-card transactions. The company said it isn’t sure yet if customers’ account numbers and other information were stolen. Supervalu fell 28 cents, or 3 percent, to $9.31.

After the market closed Wednesday, Nordstrom reported a slight drop in earnings as well as sales that fell just short of analysts’ estimates. The department-store’s stock slid $3.58, or 5 percent, to $65.11.

This article appeared in print on page 8 of the August 18th, 2014 edition of Hamodia.