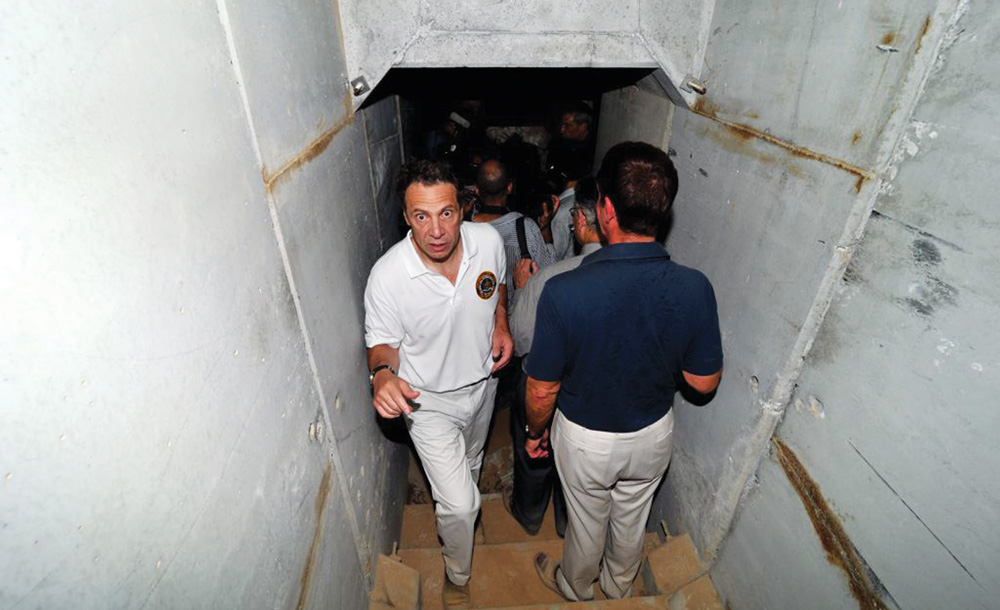 Climbing in to an armored personnel carrier 500 yards from the Gaza border, Gov. Andrew Cuomo said that actually being in a tunnel dug by Hamas to perpetrate terror attacks gave him a new perspective on what Israel has been going through these past few years. “It just reminds you how tenacious and aggressive the enemy is,” Cuomo said, according to reporters from multiple New York outlets who accompanied him on the trip. “They will not stop. You thwart them on one level and they will come back on another.” It was a two-day whirlwind for the famously insular governor, with potential imagery for any future presidential run. The trip, which ended Thursday night, combined a joint press conference with Israel’s prime minister, with side-by-side lecterns, visits with Israeli troops out in the field, high level briefings and a visit to the “cool places,” as he described the tunnel. The narrow tunnel, 130 feet deep, was reinforced with concrete and had electricity and wiring for telephones. With one end in Gaza, the other opening was just outside Kibbutz Ein Sheloshah, an Israeli border village. “Seeing it made a tremendous difference,” Cuomo said after he emerged. “I thought they were hand-dug tunnels that went several yards right across the border. These are tunnels that go miles.”

The New York delegation, which included Senate co-leaders Dean Skelos and Jeff Klein, and Assembly Speaker Sheldon Silver, began the day with a private meeting with Israeli Defense Minister Moshe Yaalon in the Kirya in Tel Aviv. The minister showed a video presentation of Hamas missile sites inside Gaza mosques and schools, as well as ambulances used to transport terrorists. Israeli Lt. Col. Peter Lerner then took the group to an Iron Dome battery just outside Ashdod, some 25 miles away from the Gaza border, before they headed to tour the terror tunnel, which was discovered several months ago by Israeli forces. When they arrived, the delegation was greeted by Shimon Peres, the former Israeli president. Cuomo presented him with a custom-made cigar box, featuring a placard with the governor’s signature and a sentence: “Friends stand together in times of crisis.” On Wednesday night, following meetings with Prime Minister Binyamin Netanyahu and newly sworn-in President Reuven Rivlin, Cuomo hosted a dinner in his Yerushalayim hotel for guests that included Dan Shapiro, the United States ambassador to Israel and Mayor Nir Barkat.