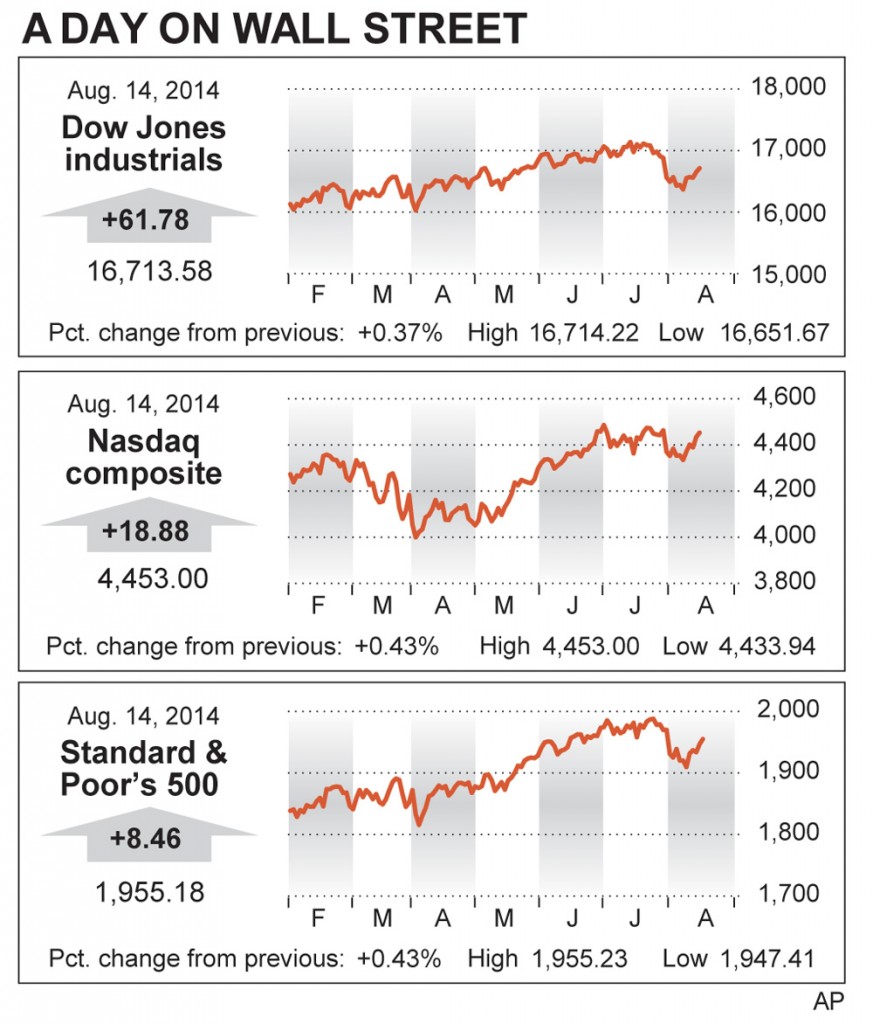 Better corporate earnings helped nudge the stock market up on Thursday in one of the quietest sessions this year.

Health-care companies led the major indexes to slight gains, while Berkshire Hathaway crossed another milestone, trading above $200,000 a share for the first time.

With many who work in the markets on vacation, trading volume on the New York Stock Exchange thinned out: just 2.6 billion shares on Thursday. An average day this year is nearly 1 billion higher.

Stronger profits for Perrigo, a drugmaker, drove its stock up 7 percent, the biggest gain in the Standard & Poor’s 500 index. Perrigo jumped $10.14 to end at $149.29. Another drugmaker, Merck, gained 93 cents, or 2 percent, to $58.78 following news that it won federal approval for a new sleeping pill.

Markets often slip into a summertime lull in August. Trading desks remain short-staffed until people return from vacation after the Labor Day legal holiday. Without any major developments, trading volume usually dries up and stock indexes turn sleepy, as if stuck in their beach chairs.

The S&P 500 is still hovering near record highs, leading some analysts to fret that the market looks too expensive. Lawrence Creatura, a fund manager at Federated Investors, argued that the solid second-quarter earnings season, which is nearly wrapped up, should put investors’ worries about high prices to rest.

The S&P 500, for instance, has gained nearly 6 percent this year. “That’s an interesting number: 6 percent just happens to be the average earnings growth rate over the very long term,” he said.

In Thursday trading, the Class A shares of Warren Buffett’s Berkshire Hathaway conglomerate crossed the $200,000 mark, making the highest-priced U.S. stock even more expensive. Buffett has never split Berkshire’s A shares to make them cheaper, although Berkshire created more affordable Class B shares, which closed Thursday at $135.30 Berkshire’s Class A shares rose $3,241, or 2 percent, to end at $202,850.

Kohl’s, a department-store chain, turned in quarterly profits that were slightly better than analysts’ expectations. Sales slipped but the company cut costs. Kohl’s surged $1.80, or 3 percent, to $56.91.

In Europe, more reports showed the region’s economic recovery has stalled. Germany’s economy shrank 0.2 percent from April to June, while the French economy stagnated. But both France’s CAC 40 and Germany’s DAX closed with gains of 0.3 percent. Britain’s FTSE 100 rose 0.4 percent.

“Investors appear to be betting that the continued raft of disappointing economic data could compel the European Central Bank to take further steps to help try and boost economic activity before the end of the year,” said Michael Hewson, chief market analyst at CMC Markets.

In the market for U.S. government bonds, the yield on the 10-year Treasury note fell to 2.40 percent. Earlier, it touched 2.38 percent, its lowest level this year.

The price of oil fell sharply on speculation that economic weakness in Europe would lead to lower demand for fuel. Benchmark U.S. crude fell $2.01 to close at $95.58 a barrel on the New York Mercantile Exchange, its lowest close since Jan. 21.