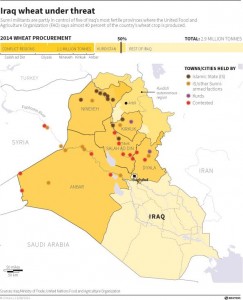 A team of U.S. military and humanitarian aid personnel landed on Iraq’s Mount Sinjar early on Wednesday to assess how to evacuate thousands of civilians under siege from Sunni militant fighters, a U.S. official said.

The United States has not ruled out using American ground forces in an operation to extract the trapped civilians, but they will not engage in combat, the White House said.

The U.S. team flew in darkness early in the morning to Mount Sinjar, where thousands of members of the Yazidi minority fled to escape an advance by Islamic State fighters, the official said.

“They were there last night and they did an assessment,” the official said.

A second U.S. official said fewer than 20 personnel were involved in the assessment of the situation and all had returned safely to the Kurdistan capital of Arbil by military air.

A team of 130 U.S. military personnel is in Arbil, urgently drawing up options ranging from creating a safe corridor to an airlift to rescue those besieged on Mount Sinjar for over a week, most of them members of the Yazidi religious minority.

“These 130 personnel are not going to be in a combat role in Iraq,” White House deputy national security adviser Ben Rhodes told reporters traveling with President Barack Obama, who is on vacation on Martha’s Vineyard island in Massachusetts.

Rhodes said the intention was to work with Kurdish forces already operating in the region and with the Iraqi military.

Kurdish fighters had been guarding Yazidi towns when armed Islamic State convoys swept in, and have already helped many thousand escape to safe areas to the north.

Rhodes said the team in Arbil would report proposals in a matter of days for rescuing those trapped without food and water on the rocky crags of the mountain, where temperatures reach over 100 degrees Fahrenheit.

“You look at corridors, you look at airlifts, you look at different ways to move people who are in a very dangerous place on that mountain to a safer position,” he said.

“We obviously have not just U.S. personnel who could potentially be engaged in that type of effort: We have Kurdish forces who are engaged in the area. … We have international partners who also want to support the provision of humanitarian assistance,” he said.

U.N. agencies have rushed emergency supplies to the Dohuk region by the Syrian and Turkish borders, where the office of the U.N. High Commissioner for Refugees says about 400,000 refugees have fled, including Yazidis, Christians and other minorities. On Wednesday they called it its highest level of emergency for the humanitarian crisis,

This article appeared in print on page 1 of the August 14th, 2014 edition of Hamodia.