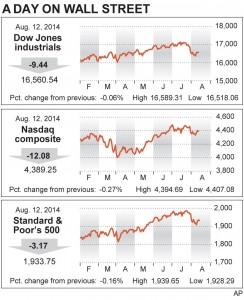 The stock market pulled back slightly Tuesday, following two days of gains, as investors focused on the damage that ongoing geopolitical tensions were causing the global economy.

Energy stocks were among the biggest decliners, dragged down by lower oil prices.

U.S. stock indexes opened modestly higher but turned lower at mid-morning and stayed there for the rest of the day. Investors took a cue from Europe, where Germany’s benchmark index fell more than 1 percent and France’s CAC 40 fell nearly 1 percent.

An indicator of German investor confidence dropped to its lowest level in 20 months. Investors worried that the Ukraine crisis will start dragging down the German economy, Europe’s largest. The continent is much more exposed to Russia than the U.S. is. Europe also gets most of its natural gas from Russia.

The Ukraine situation has dragged the German stock market down more than 8 percent from its early July peak.

It has been a quiet week for investors overall, with little economic data or company earnings to work through. Absent hard data to pull the market higher, the current trend for the market is down, Lynch said.

Fears of a Russian invasion of Ukraine have faded in recent days, but worries about conflicts around the globe are likely to keep investors on edge in the coming weeks.

A convoy of more than 260 Russian trucks, reportedly packed with supplies, moved toward Russia’s border with Ukraine on Tuesday, but Kiev said the goods would only be allowed to cross if they were inspected by the International Red Cross. Ukraine is fearful that Russia could use the move as a cover for sending troops into the separatist-held territory.

Energy stocks in the S&P 500 fell 0.7 percent, the most of the 10 sectors in the index. Kinder Morgan declined nearly 2 percent after rising 9 percent the day before on news it would combine several companies under its control. Anadarko Petroleum and Diamond Offshore Drilling fell more than 2 percent.

Energy stocks have declined noticeably in the last month, due largely to falling oil and natural gas prices. Brent crude, which is traded in the U.K. and is considered a broader gauge of the international oil market, is trading at a nine-month low. U.S. crude is trading at a seven-month low.

The price of U.S. crude oil slipped 71 cents to $97.37 a barrel Tuesday. That followed three days of increases over concerns about the reliability of Iraqi oil production.

There were other signs that investors were in a “risk-off” mode. The Russell 2000 index, which is made up primarily of smaller and riskier companies, fell 0.8 percent, much more than the rest of the market.

In individual stocks, Kate Spade plunged $9.87, or 25 percent, to $29 after executives for the handbag company warned that sales growth could slow this year and profit margins were being hit. The comments came after Kate Spade reported a better-than-expected quarterly profit.

This article appeared in print on page 24 of the August 13th, 2014 edition of Hamodia.