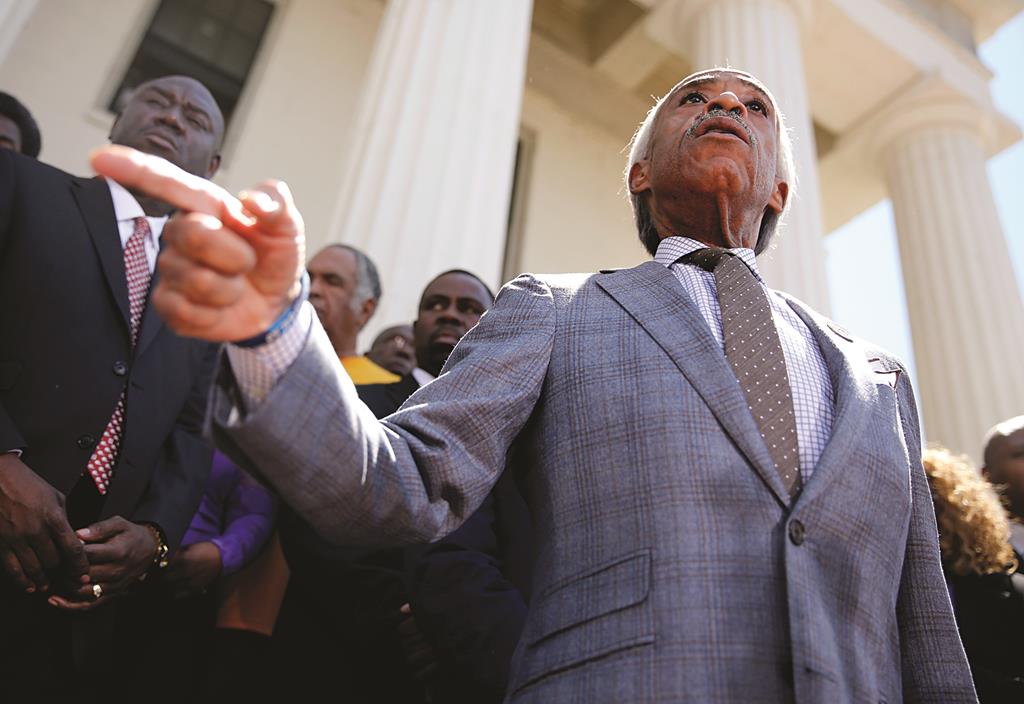 As demonstrators gathered for the fourth straight day Tuesday, the Ferguson, Mo., police chief said that because of death threats he will not publicly release the name of the police officer who fatally shot an unarmed black teenager whose killing has roiled racial tensions in the St. Louis suburb.

Al Sharpton pressed police on Tuesday to release the name of the officer who fatally shot an unarmed teenager in suburban St. Louis, but he also pleaded for calm after two nights of violent protests.

The officer was placed on administrative leave Saturday after fatally shooting 18-year-old Michael Brown in Ferguson, a predominantly black city of about 21,000 residents.

“The local authorities have put themselves in a position — hiding names and not being transparent — where people will not trust anything but an objective investigation,” Sharpton, standing with Brown’s mother and father, said during a news conference outside a St. Louis courthouse.

But he also echoed pleas by Brown’s parents and the NAACP for peaceful protests in Ferguson, where the case has stoked racial tension, protests and looting.

On Monday, Ferguson Police Chief Thomas Jackson said he would reveal the identity of the officer by noon Tuesday. But after threats were made to the police department and on social media, a spokesman for the department said it is not safe at this time to release the officer’s name.

The announcement comes after another night of unrest Monday, albeit smaller than the previous night, when vandals broke windows, looted and damaged 12 businesses in Ferguson.

In Monday night’s standoff, police in riot gear fired tear gas into crowds of protesters and arrested up to 15 people.

The heated protests in part have reflected the racial divisions in Ferguson, where two-thirds of residents are black but police and city officials are predominantly white. Black leaders have called for nonviolent demonstrations to address racism in the Ferguson and greater St. Louis police departments.

Brown had been walking down a street with a friend Saturday when, according to police, an officer drove up and attempted to get out of his patrol car. Brown pushed the officer back into the car and after an altercation over a weapon in the car, the officer and Brown exited the car, when the fatal shooting occurred, according to Jon Belmar, chief of the St. Louis County Police Department, which is the local agency investigating the shooting.

According to witnesses, however, Brown had raised his hands to surrender when the fatal shots occurred.

On Monday the Justice Department announced an investigation in conjunction with the separate county police inquiry, and black leaders called for nonviolence but accused local police and other officials of condoning racism in Ferguson and greater St. Louis for too long.  (With reporting by AP)