NY Rep in China Hoping for a Panda 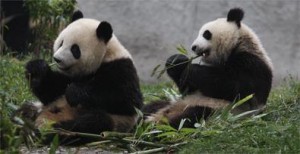 While visiting China on a privately funded congressional delegation trip, a congresswoman from Manhattan has a specific personal mission: Get New York City its own pandas.

To kick off the August recess, Rep. Carolyn Maloney, a Democrat, is traveling with a handful of colleagues for 10 days to the Far East on a Mutual Education and Cultural Exchange Act trip, approved by the State Department, hosted by the Chinese People’s Institute of Foreign Affairs and facilitated by the U.S.-Asia Institute, a nonprofit group that regularly organizes these goodwill visits.

The group is there primarily to discuss trade policy with the Chinese, but if you’ve traveled 14 hours across the globe, you might as well multitask.

And Maloney has her eye on the cuddly, bamboo-eating bears that make anyone in their presence spontaneously say, “Awww.”

The congresswoman plans to make a side visit (only a short 22-hour drive from Beijing) to Chengdu Research Base, which breeds giant pandas, to discuss options for bringing a pair to a New York City zoo.

“New York City’s economy is Congresswoman Maloney’s top priority. That’s why she is traveling to China to discuss trade policy and what can be done to increase our exports to the second-largest economy in the world,” her spokesman said in an e-mail. “She will also take a few hours to visit a panda research base to discuss the possibility of securing a panda for New York City, which would help boost tourism.”

This was on Maloney’s bucket list for years, and she said that Chinese and New York officials are open to it. New York City last had giant pandas almost 30 years ago, when the Bronx Zoo housed a pair for six months on loan.

Pandas are an attraction at only a few U.S. zoos, including the Smithsonian’s National Zoo in Washington, which projected huge boosts in tourism when Bao Bao the panda cub was born there last August.

This article appeared in print on page 14 of the August 13th, 2014 edition of Hamodia.