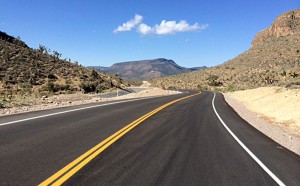 Officials from the Hualapai Tribe gathered Tuesday for a ceremonial grand opening of a road that had been a major headache for tourists headed to the Grand Canyon Skywalk.

Crews recently paved the final 9-mile stretch of the dirt-and-gravel road that had tour operators complaining of broken windows, flat tires, missing hubcaps and dust. Motorists now have a smooth drive to the tribe’s premier tourist destination, a horseshoe-shaped glass bridge that gives visitors a view of the canyon floor 4,000 feet below.

The Hualapai Tribe had planned to have Diamond Bar Road completely paved when it opened the Grand Canyon Skywalk in 2007. But a legal challenge from a local dude rancher and a lack of funding delayed it.

The tribe paid Nigel Turner $750,000 to settle the lawsuit. Turner later reopened the case, alleging that his guests were being harmed by construction and that amenities included in the settlement were being left out.

The paving project briefly was delayed when Turner began charging tourists to cross a portion of the road on his property and when human remains were found nearby. The U.S. Bureau of Indian Affairs ultimately approved a temporary road to bypass Turner’s property, and he reached an agreement with the government in the federal case.

The 1-million-acre Hualapai reservation includes 108 miles of the Grand Canyon’s western rim. About half of the tribe’s 2,200 members live in Peach Springs off Route 66.

Tourism is a key source of revenue for the tribe that once had a casino near the west rim but discovered gamblers largely were unwilling to travel 21 miles over a then-unpaved road to get to it.

Tourist ventures now include helicopter tours, horseback rides, a dude ranch and a one-day whitewater rafting trip on the Colorado River. The tribe also has hosted stuntmen, including Robbie Knievel, who jumped a 200-foot-wide chasm of the Grand Canyon in 1999. Illusionist Criss Angel was shackled and locked inside a crate that was suspended over the edge of the Grand Canyon in 2010. Swiss adventurer Yves Rossy flew his jet-propelled wingsuit 200 feet above the canyon’s rim in 2011.

Skywalk by the Numbers

The late Las Vegas businessman David Jin approached the Hualapai Tribe in 1996 with a plan to build the Skywalk, and invested $30 million.

The horseshoe-shaped glass bridge juts out 70 feet from the canyon walls, supported by steel beams anchored 46 feet into the rock. It can withstand winds of up to 100 mph. Shock absorbers keep it from wobbling up and down like a diving board and making people woozy.

At over 1 million pounds, the Skywalk is about as heavy as four Boeing 757 jets stacked on top of each other. It was perched at the canyon’s edge using an elaborate system of pulleys connected to four tractor-trailers.

Getting to the Skywalk took 2½ hours from Las Vegas, four hours from Flagstaff and five hours from Phoenix, though the newly paved road is expected to reduce driving time.

A View of Visitors

Former astronauts Buzz Aldrin and John Herrington were among the first people to step onto the Skywalk during the March 2007 grand opening. Aldrin, the Apollo 11 astronaut who walked on the moon in 1969, declared it a “magnificent first walk.”

Since then, some 700,000 people each year visit Grand Canyon West, where the main attraction is the Skywalk. All tourists must buy a permit for tribal land, which costs about $42. The minimum cost of a package that includes a stroll on the Skywalk is nearly $81. The tribe doesn’t publicly release revenue from the Skywalk, but said it has supported tribal programs and employees.

The Skywalk is about 90 miles east of Grand Canyon National Park, which attracts some 4.5 million people each year.