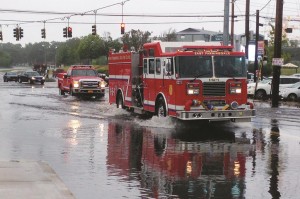 A record-setting rainstorm dumped more than a foot of water on parts of suburban New York in a matter of hours, turning highways into streams that stranded hundreds of drivers, flooded basements and caused at least one fatal crash.

“We’ve had another historic extreme weather event here,” Steve Bellone, the Suffolk County Executive, said at a news conference Wednesday outside the North Babylon firehouse where dozens of stranded drivers were brought for shelter during the height of the storm.

The National Weather Service said a summer’s worth of rain fell within a few hours — over 13 inches at MacArthur
Airport in Ronkonkoma. That was more than the area’s normal total for June, July and August of 11.75 inches.

More than 5 inches fell in just a one-hour period, from 5 to 6 a.m. Wednesday, said weather service meteorologist Joe Pollina. He said the previous state record for rainfall over a 24-hour period was 11.6 inches near Tannersville during Tropical Storm Irene three years ago.

Bellone said most municipal sewer systems can handle about 5 inches of rain in 24 hours. “What happened today was unprecedented,” he said.

New York City ranged from under an inch in Central Park to over 3 inches at Kennedy Airport. But parts of New Jersey also got more than 7 inches. Baltimore got 6.3 inches, its highest rain total since 1933 and the second-highest since measurements were first taken in 1871.

This article appeared in print on page 1 of the August 14th, 2014 edition of Hamodia.