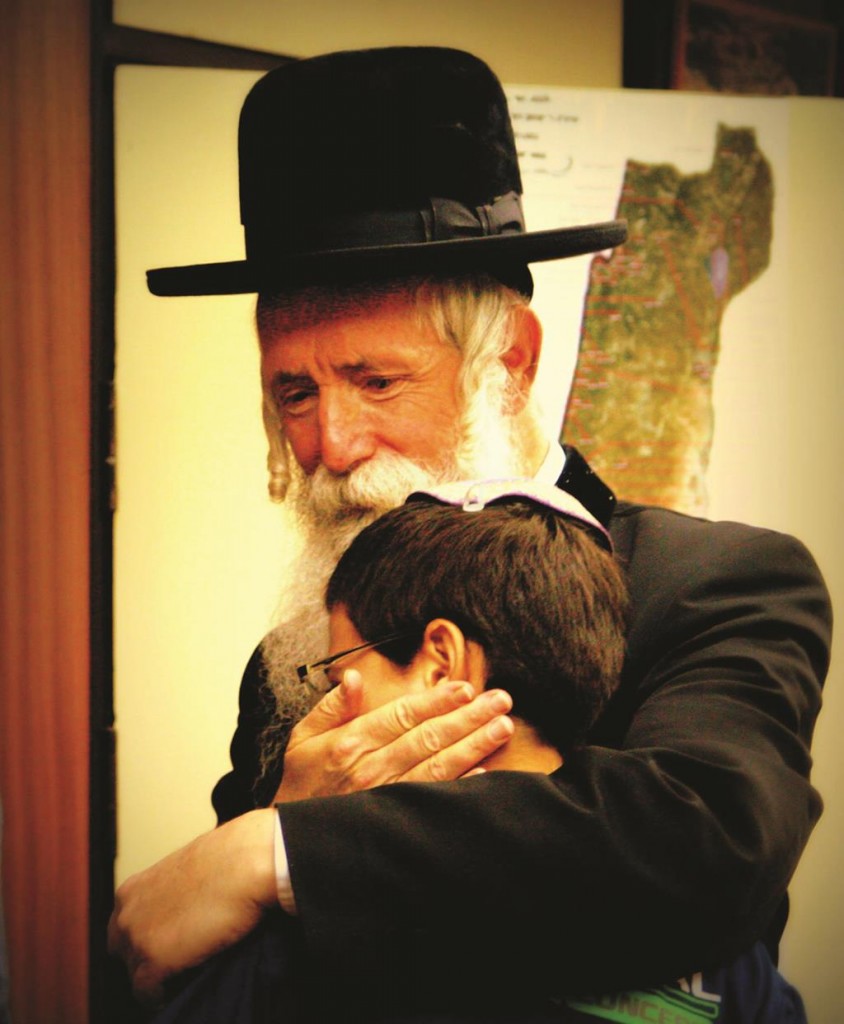 It seems as if everyone in Eretz Yisrael knows who Harav Yitzchak Dovid Grossman is; he is both respected and beloved. Born 67 years ago to a prominent Meah Shearim family of Pinsk-Karliner Chassidim, Harav Grossman is a sixth-generation Yerushalmi who says, “I grew up in a home of holiness and purity, yiras Shamayim and ahavas Yisrael.”

When Reb Yitzchak Dovid got married, he and his wife, who was raised in a Chabad family also filled with ahavas Yisrael, wanted to reach out to Am Yisrael, to help bring those who had gone astray back to their spiritual roots and to reveal the pure Jewish souls within them. So the young couple moved to Migdal Ha’Emek, a development town in northern Israel in the Lower Galilee that was at the time a major center of narcotics-dealing and crime. The Rav explains what motivated him then and continues to be his driving force: “The main point is to love and help our fellow Jews. We’re all one family, and Hashem wants us to love and help each other.”

Though initially greeted with suspicion, within a year of his arrival Harav Grossman had done so much for the welfare of the town’s residents, and especially the wayward youth, that at the age of 23 he was unanimously appointed Chief Rabbi of Migdal Ha’Emek! He founded Migdal Ohr, which has since grown into an enormous educational institution, and then turned to prison-inmate rehabilitation and more and more — anything to help his fellow Jews.

“For me there is no such thing as secular or religious, Ashkenazi or Sephardi,” says Harav Grossman. “We pray every day: ‘Bless us, our Father, all of us as one.’ That is what is unique about the Jewish People. We are all one! We have to remember that and live accordingly.”

Over the years Harav Grossman has helped so many Jews that in 1983 he was presented with the Love of Israel Award by the president of Israel, and in 2004 he was awarded the state’s highest honor, The Israel Prize, for lifetime contributions to Israeli society.

Though still devoted to Migdal Ohr (he twice turned down offers to become Chief Rabbi of Israel in order to remain connected to his educational work), today Harav Grossman is active in almost every area of Jewish life where extra love, light and help are needed.

Now, too, during Operation Protective Edge, Harav Grossman is doing whatever he can to help his fellow Jews: the soldiers, the wounded, and the families of the fallen Kedoshim, Hy”d.

Just before the war, when the three precious yeshivah boys Avraham Naftali Frankel, Eyal Yifrach and Gilad Shaar,  Hy”d, were still missing, Harav Grossman visited the Shaar family in Yishuv Talmon. The Rav had met Gilad a few years earlier when the boy was about to turn bar mitzvah and came to Harav Grossman “to learn about ahavas Yisrael.”As Gilad saw how at at Migdal Ohr love and kindness were put into action, he said that he too wanted to dedicate his life for the sake of Klal Yisrael, the Jewish People.

At the Shaar home, Harav Grossman told the boy’s family that Gilad had indeed given his life for Klal Yisrael. “Through hashgachah pratis, individual Divine Providence, the kidnapping of the three boys led to an unprecedented expression of unity, prayer, resolutions and good deeds of Jews in Eretz Yisrael and around the world.”

Harav Grossman looks back and adds: “The suffering of those three innocent boys also led to the discovery of our enemy’s arms caches and previously unknown number of tunnels, as well as their plans and ability to endanger Am Yisrael far beyond what we previously thought. That led to the present operation which, b’chasdei Hashem, is instrumental in protecting thousands of lives.”

Soon after Harav Grossman’s visit to the Shaar family he spoke to his friend in Brazil, Mr. Zev Horowitz, and told him about Gilad’s desire to help Klal Yisrael. This eventually led Mr. Horowitz to contribute three sifrei Torah, one for each of the families of the murdered boys, because they gave their lives for Klal Yisrael, and we have been taught that every sefer Torah includes all of Klal Yisrael.

Since the beginning of Operation Protective Edge, Harav Grossman has been spending much time in the south, in Gaza. He met with soldiers before they went into battle and filled their thirsty souls with what they needed to face the enemy. He gave them beautiful books of Tehillim and encouraged and strengthened them with words that emanate from a heart of love and emunah: “It is written in the Torah,” he told them, “that a Kohen spoke to the soldiers before they went to battle and said: ‘Shema Yisrael! Hashem Elokeinu Hashem Echad… You are going to war against our enemies.’ Rashi says: ‘The merit of the emunah that you verbalize when you say Shema Yisrael will enable you to overcome your enemies.’    And in this merit Hashem will give you success in all that you do.”

At one of the bases, related Harav Grossman, after saying Shema Yisrael with him, the soldiers spontaneously  began to sing ‘Anachnu maaminim bnei maaminim, and we have no one to lean upon except our Father in Heaven’! “It was with this song,” said Harav Grossman, “that they went into battle.”

The Rav was later told that several times during fierce battles one soldier would yell to another — even in the tunnels — “Anachnu maaminim bnei maaminim.” “The power of their emunah,” says Harav Grossman, “gave them success far beyond what could have been expected.”

When the soldiers returned from battle they told Harav Grossman of miracles that saved them from dangers and even certain death. “In one instance,” says the Rav, “a group of our soldiers went into a building not knowing that there were explosives planted under the plaster walls, explosives that were meant to blow up the building with the soldiers inside. The soldiers went in, did what they had to do, and only after they left did the explosives go off. They themselves said that it was in the zechus of Shema Yisrael and the emunah that they had both before and during the battle.”

The Rav visits wounded soldiers in hospitals around the country. For each soldier he does all he can to help — with words, with a brachah, with hope. He gives each one a personally inscribed sefer Tehillim. Some of them, yirachem Hashem, are crippled for life. The Rav brought along a reserve soldier who, lo aleinu, lost a hand and a leg in the Lebanon War years ago. The Rav and the reservist show the bedridden, crippled soldiers that they, too, can recuperate, that life can go on even in difficult, painful circumstances. The wounded see that there is a future despite loss and limitations.

Harav Grossman explains to them the value of what they did. “I tell them how beloved they are to our Father in Heaven for the sacrifice they made for the Jewish People and the Jewish homeland. When people suffer they become closer to spiritual truths, and those truths give them comfort and courage.”

When visiting the wounded the Rav sometimes brings two Chassidim along to sing and play the violin.

Harav Grossman relates: “There’s no difference between religious and non-religious, between Hesder boys and kibbutznikim. They all want to take the Tehillim and pray, they all want a brachah and chizuk. Difficult circumstances, fighting or, lo aleinu, being wounded, reveal the emunah that is inside every Jew, as Chassidus teaches us, “Kol Yehudi hu chelek Eloka mimaal, mamash. Every Jew is a part of Hashem.”

“I sat near the bedside of a wounded kibbutznik,” the Rav continues, “who told me that during the war, at the moment when he was severely wounded, he raised his eyes up to Hashem and asked for mechilah. He told me that he is sure that this, and believing that Hashem would help him, is what enabled him to survive!”

Sadly, not every soldier survived, and Harav Grossman has made shivah calls to many of the families. “I tell them,” says the Rav, “that there is no angel or saraf (celestial being) that can stand on the level at which the fallen soldier stands, because the soldier gave his very life for the sake of Am Yisrael and Eretz Yisrael. He is now in the highest place in the upper world. These true words are extremely comforting.”

Caring for the Residents of the South

Besides caring for the soldiers, the Rav is concerned with the tens of thousands of residents of southern Eretz Yisrael whose lives have been turned into a nightmare as a result of the missile attacks and the threat presented by the tunnels. Just buying food and cooking it is a challenge when sirens blare so  frequently and all must run for their lives. Harav Grossman teamed up with Harav Simcha Krakovsky of Beis HaTavshil in Bnei Brak and  to date they have sent 40,000 meals to families in the South.

As important as getting food is, it’s not going to solve all the problems. The stress is enough to upset anyone’s emotional balance.

Harav Grossman thought about this, and turned to the Sochnut, the Jewish Agency. Together they arranged to take more than 30,000 people from the South, mostly adults, up North for a day so they could relax and lead normal lives, even for  just a day.

Harav Grossman is as concerned about the children as he is about the adults — the  sweet, innocent children from the South who are going through so much. And so the Rav has brought hundreds of children to Migdal Ohr where, besides enjoying the excellent facilities, they were loved and pampered as if they were family — which, of course, they are! Each group came for a week to 10 days, and clearly benefited from being far away from the stresses and fears of their home situation. They enjoyed activities, food, friendships and whatever else their bodies, hearts and neshamos needed.

Harav Grossman explains that challenges in life open us up to Hashem’s truth, wisdom, kindness and love. It is during those dark times that the love and concern of Hashem’s devoted servants can be most meaningful and effective. For decades Harav Grossman has been helping his fellow Jews in trouble. Now, when soldiers and civilians alike are in danger, frightened and in pain, Harav Yitzchak Dovid Grossman lifts our hearts and spirits and brings us closer to Hashem, our Father in Heaven Who loves each and every one of us as a father loves his child. May Hashem give Harav Grossman continued good health and everything else he needs so that he can continue with siyatta diShmaya to help the family he loves so much — Am Yisrael.