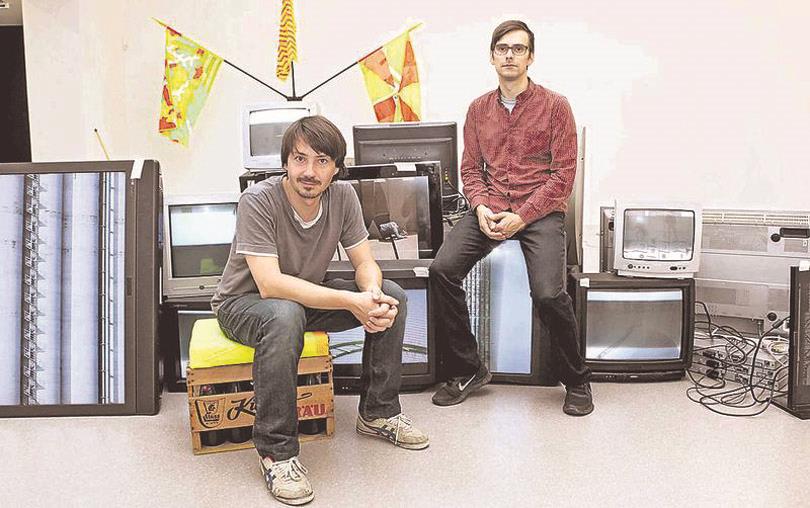 Mayor Bill de Blasio says that if two German artists really are the culprits who replaced the American flags atop the Brooklyn Bridge with faded white versions, they should be arrested.

Berlin-based Mischa Leinkauf and Mattias Wermke admitted this week they made the switch as a tribute to public art and the bridge’s architect, in a bizarre urban mystery that exposed holes in security at one of the city’s most enduring landmarks.

The NYPD is investigating their claim but has not yet concluded if the men were responsible for hoisting the hand-sewn surrender flags onto the 131-year-old bridge’s neo-gothic stone towers.

De Blasio said Wednesday that while he was not a prosecutor, the incident “looked like trespassing” to him. And he said that if a crime were committed, charges should be filed.

In a statement, the artists said they “were careful to treat the bridge and the flags with respect,” but they didn’t address potential criminal liability from the project. They said they followed U.S. Flag Code in their handling of the American flags they removed and were returning them.

Deputy Commissioner Stephen Davis said that detectives are trying to determine if more than two people were involved, but if the artists have the flags, “we certainly would love to have them back.”

Leinkauf and Wermke have scaled buildings, bridges and statues in a series of projects blurring the line of access to public works and spaces. In 2007, according to their website, they tied balloons to cables high above the Brooklyn Bridge roadway.

The day the flags went up, the police department’s counterterrorism and intelligence chief said he believed four or five people scaled to the top of the bridge’s towers and swapped the flags in the dead of night.

Deputy Commissioner John Miller said the people involved appeared to use aluminum cooking sheets to cover the lamps illuminating the American flags that usually fly there before hoisting their bleached white replacements.

Video footage of the security breach shows the people walking on the bridge’s footpath at about 3:10 a.m., and the light on the bridge’s Brooklyn tower flickers and goes dark about 20 minutes later, Miller said. The same thing happens about 12 minutes later on the Manhattan tower, he said.

Any potential arrest involving suspects from Germany would be done through Interpol, the international police organization.