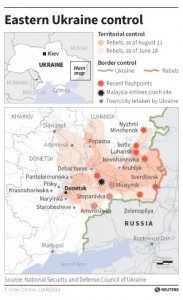 Ukrainian forces on Monday zeroed in on rebel strongholds as the government welcomed an international humanitarian relief mission into the rebellious east involving Russia, the United States and the European Union.

The mission will be conducted under the auspices of the International Committee of the Red Cross. The organization said in a statement it is ready to facilitate the operation with the involvement of all sides concerned following a Russian initiative to provide humanitarian assistance to people in eastern Ukraine.

“The practical details of this operation need to be clarified before this initiative can move forward,” said Laurent Corbaz, the ICRC’s head of operations for Europe and Central Asia.

Moscow had long urged Kiev to allow the aid delivery, but Ukraine and the West previously had opposed the move, fearing that it could serve as a pretext for sending Russian troops into rebel-held territory. Ukraine and the West have accused Moscow of arming and supporting the rebels fighting government troops in the east, a charge that the Kremlin has denied.

The Red Cross said it has shared a document with Ukrainian and Russian authorities that stipulates all parties must guarantee the security of its staff during the operation and respect the organization’s neutrality.

The aid mission was announced after a conversation between U.S. President Barack Obama and Ukrainian President Petro Poroshenko Monday.

Some of the heaviest impact on civilians has been seen in Luhansk — the rebel-held capital of the Luhansk province that had a pre-war population of 420,000. City authorities said Monday that the 250,000 residents remaining have had no electricity or water supplies for nine days.

This article appeared in print on page 3 of the August 12th, 2014 edition of Hamodia.

Iran Will Respond to EU’s Nuclear Text by Midnight Monday