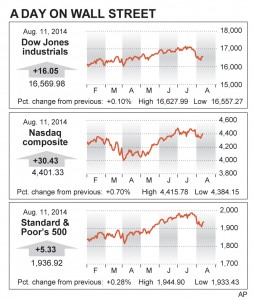 U.S. stocks gained on Monday as investors focused on corporate news instead of geopolitical worries.

Kinder Morgan surged after announcing that it would combine a group of businesses that it controls to create the fourth-biggest U.S. energy company by market value. Banana seller Chiquita Brands International soared after the company received a $611 million buyout offer.

The stock market was extending a rebound from Friday when it logged its biggest one-day gain in five months following signs that tensions in Ukraine might be easing. In July stocks had slumped as tensions between Russia and the West had escalated.

“We’re hopeful that geopolitical tensions will ramp down,” said Jim Russell, a regional investment director at US Bank. “The fundamental economic backdrop remains pretty firm, even though investment sentiment remains less than certain.”

Kinder Morgan was the biggest gainer in the S&P 500. The energy company rose $3.25, or 9 percent, to $39.37 after the company said Sunday that the group of oil and gas pipeline and storage companies that it controls will combine.

Shares of Priceline Group rose $27.72, or 2.2 percent, to $1,309.20 after the company reported second-quarter earnings that topped Wall Street expectations. The travel company said the summer season got off to a strong start. Shares of rival Expedia gained $1.39, or 1.7 percent, to $83.94.

More than 90 percent of the companies in the S&P 500 index have now reported earnings for the second quarter.

Stocks have also been getting a lift as the flow of mergers and acquisitions has picked up this year.

On Monday, Chiquita Brands International surged $3.04, or 30 percent, to $13.10 after the company received a buyout offer from investment firm Safra Group and the Brazilian agribusiness and juice company Cutrale Group.

Safra and Cutrale are offering $13 per share, a 29 percent premium to Chiquita’s closing price of $10.06 on Friday. Chiquita said its board would review it and asked shareholders to await its recommendation. The unsolicited bid disclosed Monday comes as Chiquita and Fyffes of Ireland were working on their own transaction. The two companies agreed in March to merge in a stock-for-stock deal to create the world’s biggest banana supplier.

Even though stocks have rallied over the last two days, investors should get used to the prospect of increased volatility in the market as the Federal Reserve nears the end of its economic stimulus program and gets closer to raising interest rates, said Kristina Hooper, US Investment Strategist at Allianz Global Investors.

U.S. government bond prices were little changed. The yield on the 10-year Treasury note held at 2.42 percent from Friday, close to its lowest level in a year.

Longer-dated Treasury notes and bonds have surged this year even though the Federal Reserve is winding down its economic stimulus and purchasing fewer bonds. Analysts say that demand for the notes has increased because the yields on the bonds of other developed nations have fallen further. The yield on the 10-year German government bond is 1.06 percent and the yield on France’s government bonds with a similar maturity is 1.47 percent.

This article appeared in print on page 8 of the August 12th, 2014 edition of Hamodia.