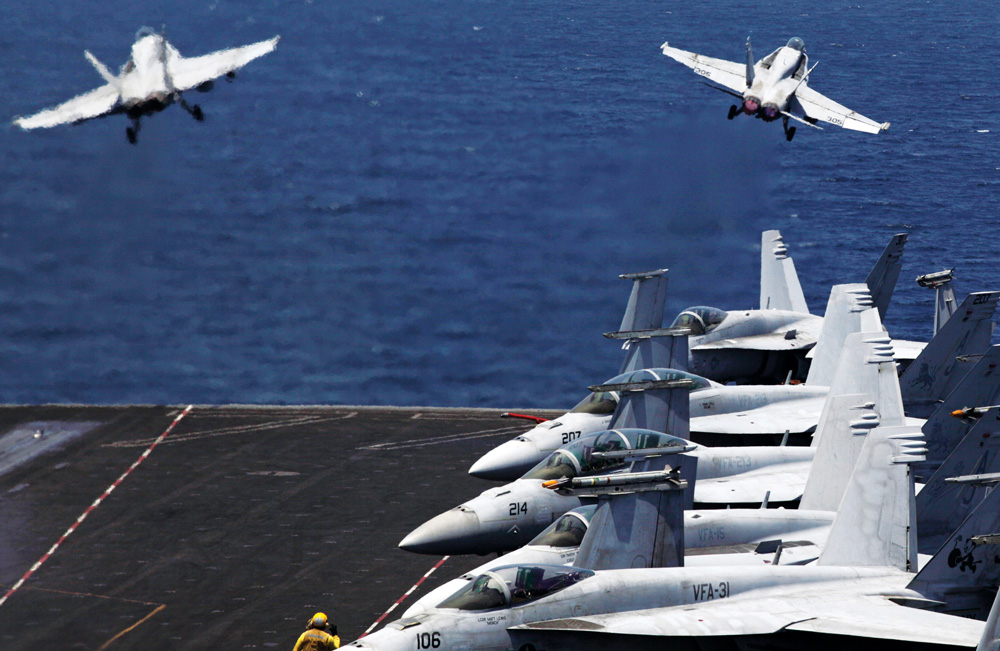 Iraq’s president snubbed incumbent Prime Minister Nouri al-Maliki and picked another politician to form the next government Monday, setting up a fierce political power struggle even as the country battles extremists in the north and west.

The showdown came as the United States increased its role in fighting back Sunni extremists of the Islamic State group that is threatening the autonomous Kurdish region in the north. Senior American officials said U.S. intelligence agencies are directly arming the Kurds who are battling the terrorists in what would be a shift in Washington’s policy of only working through the central government in Baghdad.

U.S. warplanes carried out new strikes Sunday, hitting a convoy of Sunni terrorists moving to attack Kurdish forces defending the autonomous zone’s capital, Irbil. The recent American airstrikes have helped the Kurds achieve one of their first victories after weeks of retreat as peshmerga fighters over the weekend recaptured two towns near Irbil. The Pentagon’s director of operations said the effort will do little to slow Islamic State terrorists overall.

Haider al-Ibadi, the deputy speaker of parliament from al-Maliki’s Shiite Dawa party, was selected by President Fouad Massoum to be the new prime minister and was given 30 days to present a new government to lawmakers for approval.

Al-Maliki has defiantly rejected the nomination. In a speech after midnight Sunday, he accused Massoum of blocking his reappointment as prime minister and carrying out “a coup against the constitution and the political process.”

In another speech broadcast Monday night, al-Maliki insisted al-Ibadi’s nomination “runs against the constitutional procedures” and he accused the United States of siding with political forces “who have violated the constitution.”

“Today, we are facing a grave constitutional breach and we have appealed and we have the proof that we are the largest bloc,” al-Maliki said.

“We assure all the Iraqi people and the political groups that there is no importance or value to this nomination,” he added.

But despite angrily insisting he should be nominated for a third term, al-Maliki has lost some support with the main coalition of Shiite parties. His critics say al-Maliki contributed to Iraq’s political crisis by monopolizing power and pursuing a sectarian agenda that alienated the country’s Sunni and Kurdish minorities.

The nomination of al-Ibadi came hours after al-Maliki deployed his elite security forces in the streets of Baghdad. Hundreds of his supporters were escorted to a popular rally site by military trucks, raising fears that he might try to use force to stay in power.

“We are with you, al-Maliki,” they shouted, waving posters of him as they sang and danced.

Al-Ibadi, the former minister of communications from 2003-04, pledged to form a government to “protect the Iraqi people.” He was nominated after receiving the majority of votes from lawmakers within the Iraqi National Alliance, a coalition of Shiite parties.

A peaceful transition is looking increasingly unlikely, given al-Maliki’s reputation for having replaced many senior Sunni officers with less-experienced, more loyal, Shiite officers.

The U.S. weapons being directly sent to Irbil are very limited in scope and number, and mostly consist of light arms like AK-47s and ammunition, a Kurdish government official and a senior Pentagon official said.

The Kurdish official said the weapons are being sent through U.S. intelligence agencies, and not the Pentagon or the State Department. Lt. Gen. William Mayville, the operations director for the Joint Chiefs of Staff, said the Pentagon was looking at other ways to help the Kurds.

But the Kurdish official said the U.S. lethal aid is still not enough to battle the militants, even though peshmerga and other Kurdish forces were supplemented with similar munitions from Baghdad over the weekend. Neither official was authorized to discuss the U.S. arms by name and spoke on condition of anonymity.

U.S. airstrikes have reinvigorated Iraqi Kurdish forces battling the Islamic State and on Sunday, the Kurdish peshmerga fighters retook two towns — Makhmour and al-Gweir, some 28 miles from Irbil — from the Sunni insurgents in what was one of their first victories after weeks of retreat.

The successes were balanced out, however, by news of a defeat in the far eastern Diyala province where Kurdish forces were driven out of the town of Jalula after fierce fighting against the terrorists. The insurgents blasted their way into the town using a truck bomb followed up with several suicide bombers on foot, said a police officer and an army official, adding that at least 14 Kurdish fighters were killed.

President Obama warned Saturday the new campaign in Iraq requires military and political changes and “is going to be a long-term project.”

The fighting has displaced more than 1.2 million people, said Kieran Dwyer, spokesman for the U.N. Office for the Coordination of Humanitarian Affairs.

“All of this amounts to a humanitarian catastrophe,” Dwyer told reporters by phone from Irbil.

U.S. Agency for International Development Administrator Rajiv Shah said that their team will help speed food, water and other life-saving supplies to Iraqis.

Much of the assistance will go to thousands of members of an Iraqi religious minority group known as Yazidis who have been trapped on a mountaintop in northwest Iraq to escape certain death by Sunni terrorists with the Islamic State group.