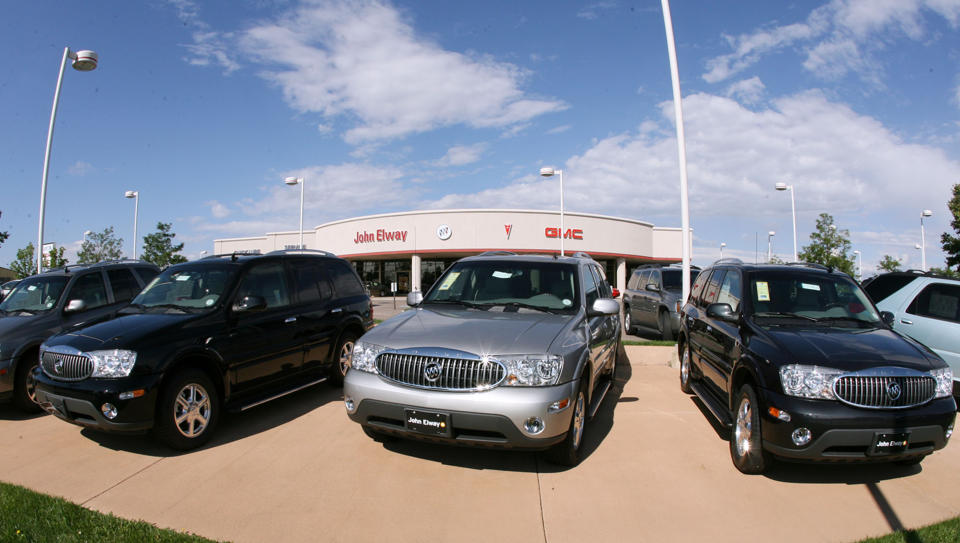 General Motors’ troubles with safety recalls have surfaced in another case, this time with the company recalling a group of SUVs for a third time to fix power-window switches that can catch fire.

The problem, revealed in documents posted by federal safety regulators this week, is so serious that GM is telling customers to park the SUVs outdoors until they are repaired because they could catch fire when left unattended.

The SUV recall was one of six announced by GM on June 30 that covered 7.6 million vehicles. It covers about 189,000 vehicles in North America, mainly from the 2006 and 2007 model years. Models affected include the Chevrolet TrailBlazer, GMC Envoy, Buick Rainier, Isuzu Ascender and Saab 97-X.

Those vehicles will be left outside for a while. Parts won’t be ready until October at the earliest, according to GM. The automaker also has ordered its dealers to stop selling the SUVs as used cars until they are fixed.

GM is in the midst of the biggest safety crisis in its history, touched off by the delayed recall of 2.6 million older small cars to fix faulty ignition switches. The company has issued a record 60 recalls this year covering nearly 29 million vehicles.

Before this year, GM had been reluctant to issue recalls, at times opting for lower-cost fixes for safety problems. It’s been fined $35 million by the National Highway Traffic Safety Administration for lapses in reporting the ignition-switch problems, which it blames for at least 13 deaths.

After the ignition-switch debacle, GM did a companywide safety review, appointed a new global safety chief and pledged to recall cars quickly.

The SUV problem first appeared early in 2012, when NHTSA began investigating consumer complaints of fires in the driver’s-door switches that control power windows.

At first, GM tried to address the issue with a “service campaign,” in which it sent letters to owners telling them that water can find its way into the switches, causing rust that can result in short circuits, overheating and possibly fires. The campaign, which wasn’t a recall, extended the warranty and offered service only to vehicles that exhibited the problems. It was limited to 20 states and Washington, D.C., where salt is used to clear roads in the winter.

But in August of 2012, under government pressure, GM recalled 278,000 of the SUVs in the cold-weather states and offered extended warranties to the rest of the country. NHTSA kept investigating, and 10 months later, GM expanded the recall nationwide.

By then, NHTSA and GM had received 242 complaints, including 28 about fires. There were no injuries.

In one complaint, filed with NHTSA from October of 2008, a woman reported that the alarm sounded while her 2006 TrailBlazer was parked in her driveway. When she looked outside, it was in flames. Firefighters put out the blaze and told her it started in the driver’s door.

“The fire burned the entire driver’s side of the vehicle, a portion of the front passenger seat and the roof,” she wrote. People filing complaints are not identified by the agency.

The fix used by GM last year was to put a protective coating around the window switch circuit boards, which is less costly than replacing the switches. But starting this April, GM received complaints that the switches malfunctioned in SUVs that had been repaired. So in June, it decided to do the third recall and replace all of the switches.

“We are recalling them because the fix that we put in did not work,” spokesman Alan Adler said Thursday. “We’re taking care of it. We’re doing the right thing.”

Initially, GM tried the service campaign because the number of incidents was low, he said. It was limited to the cold-weather states because salty water made the switches corrode quickly and incidents were few in warmer states, Adler said.

Letters notifying owners about the SUV recall should be mailed soon. Owners will get a second letter sometime from October to December telling them when parts are available to fix the vehicles.