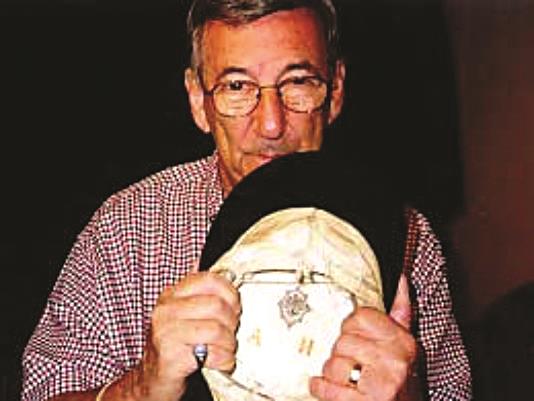 Richard Marowitz was just a day removed from witnessing the horrors of Dachau when he found a top hat on a shelf in a closet in Adolf Hitler’s Munich apartment.

Still furious over the gruesome sights he had seen at the nearby Nazi concentration camp, the 19-year-old self-described “skinny Jewish kid” from New York threw the black silk hat on the floor, jumped off the chair he had used to reach it and stomped Hitler’s formal headwear until it was flat.

Born in Middletown and raised in Brooklyn, Marowitz was playing trumpet in a swing band when he was drafted into the Army. He served as a reconnaissance scout in the 42nd Infantry Division as it fought its way across Europe in 1945. On April 29, his unit was ordered to push ahead to a place called Dachau to beat other American divisions headed there.

Marowitz and his comrades sped their Jeeps through German convoys and enemy positions, firing their guns all the way. “As we got closer to Dachau, we got this awful smell,” he recalled.

They were among the first American soldiers to enter the concentration camp, where the GIs found bodies stacked inside rail cars and emaciated inmates who were barely alive.

The next day, the scout was among a group sent to search Hitler’s Munich apartment. While looking in a closet, Marowitz found a top hat with the initials “A.H.” on the lining. He jumped up and down on the hat a few times in anger. It was April 30, the day Hitler took his life in his bunker in Berlin.

Decades later, Marowitz started taking it along when he gave talks about the war and the Holocaust at Albany-area schools. His story was told in a 2003 documentary film, “Hitler’s Hat.” At the veteran’s request, the family will donate the hat to a museum, the son said.