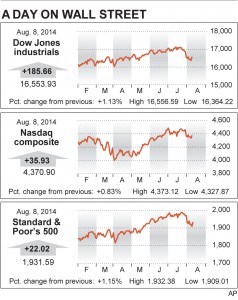 A burst of buying Friday in U.S. stocks defied slumps in other markets and offered hope for investors shaken by geopolitical turmoil. Major U.S. stock indexes closed up around 1 percent, buoyed by signs that tensions in Ukraine might be easing.

The rally on Wall Street contrasted with price declines in European and Asian stock markets. Fear has been creeping into stock and bond markets around the world in recent weeks against a backdrop of escalating global conflicts.

News Friday of U.S. fighter jets dropping bombs in Iraq and the end of a three-day cease-fire in Gaza weighed further on European markets. Asian markets also had a bad week, including a 5 percent drop in Japan’s benchmark stock index.

As anxieties have risen in recent days, money has been flowing from around the world into U.S. Treasurys, the perennial safe haven for spooked investors.

U.S. stock markets bucked the trend Friday as investors snapped up shares that had been beaten down in recent days. The buying surged on reports Russia had ended military exercises near Ukraine. The Dow Jones industrial average surged 1.1 percent, its biggest gain since March. The index remains 3.4 percent below its record high set July 16.

“The U.S. economy will grow at 3 percent or 4 percent for the rest of the year,” Paulsen said. “Are geopolitical risks really going to have an economic impact?”

In June and most of July, prices in major stock indexes in the United States rose even in the face of the widening conflicts around the world. Some experts warned that markets had grown dangerously complacent.

But then the West imposed increasingly crushing sanctions on Russia for supporting rebels in Ukraine. The war in Gaza dragged on. And Sunni extremists made advances in northern Iraq.

Prices then began a sustained decline, even in resilient U.S. markets. U.S. stocks in July posted their first monthly loss since January.

The fear has driven up various government bond prices, too, and sent yields down. The yield on German government notes maturing in 10 years, for instance, hit an all-time low Friday. The yield on U.S. notes of the same maturity has reached its lowest level in about a year.

Another sign of worry, the VIX, a gauge of expectation of future U.S. stock volatility, has climbed nearly 50 percent since early July.

One fear is that Europe could fall back into another recession after having emerged from one last year. The economies of the 18 countries that share the euro currency are barely growing, and many of them depend on Russia for natural gas imports.

The troubles in Iraq threaten oil supplies. A report from Citigroup to clients on Friday noted Iraq is the fastest-growing supplier among OPEC members.

Benchmark U.S. crude oil rose 31 cents to close at $97.65 a barrel on the New York Mercantile Exchange. Brent crude, a benchmark for international oils used by many U.S. refineries, fell 42 cents to close at $105.02 on the ICE Futures exchange in London.

The Citi report also noted, though, that there was reason to keep buying stocks, not the least of which is strong corporate earnings.

An announcement from Gap on Friday underscored that trend. It reported that sales increased 3 percent in the second quarter as growth at Old Navy offset lower sales of the company’s namesake brand. Its stock jumped $2.37, or 6 percent, to $42.57.

With nearly all second-quarter results for S&P 500 companies out, analysts are calling for earnings in that index to jump 10 percent from a year earlier. At the beginning of July, they expected a gain of less than 7 percent, according to S&P Capital IQ, a data provider.

In economic news, the U.S. Labor Department reported that workers were more productive in the April-June quarter and that labor costs rose slightly, a sharp turnaround from grim first-quarter figures. Productivity increased 2.5 percent at a seasonally adjusted annual rate, after plummeting 4.5 percent in the first quarter.

In Europe, Germany’s DAX fell 0.3 percent while the FTSE 100 index of British shares dropped 0.5 percent. Both indexes are down about 2 percent for the week, capping three weeks of losses.

France’s CAC-40 was flat, but ended the week down 1.3 percent. That was its third straight weekly loss.

The yield on the 10-year Treasury note edged up to 2.42 percent from 2.41 percent late Thursday.

This article appeared in print on page 8 of the August 11th, 2014 edition of Hamodia.