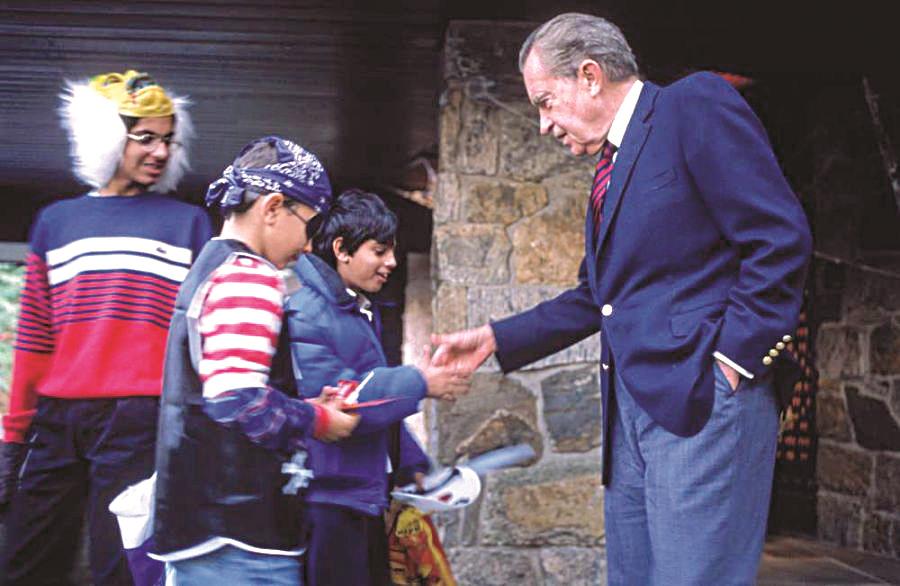 The night before he cut Richard Nixon’s hair for the first time, Domenic Parisi was so nervous he barely slept, with visions of limousines descending on his little barbershop on Maple Avenue.

But at 7:30 a.m., the only activity was two men sitting in an ugly little gold sedan. One man handed the other a $10 bill, and the second man got out of the car. The man was the ex-president of the United States.

That first haircut apparently went well. For nine years, until Nixon passed away from a stroke in 1994, Parisi cut the former president’s hair every two weeks.

“He was like everybody else,” Parisi said on Saturday, 40 years since Nixon resigned the presidency in disgrace. “He liked to talk about his family.”

Saturday’s unique anniversary — presidents have died in office, but in more than two centuries Richard Nixon has been the only one to resign — feels especially personal to many people in North Jersey.

Nixon was no native son — his presidential library and boyhood home sit in Yorba Linda, California, where he and his political career were born. But in Bergen County where Nixon spent the last 13 years of his life, many people who spent time with the former president remember him as a quiet, almost sensitive man. It’s a view at odds with his public image as a particularly bare-knuckled politician.

After Watergate, the impeachment hearings and the searing photos of Nixon’s farewell from the steps of a presidential helicopter, Bergen eventually became Nixon’s home of choice. He and his wife, Pat, moved to a comfortable home on a large and leafy lot in Saddle River, and finally, as his health declined, to a town house in a gated community in Park Ridge.

His Bergen County homes offered Nixon everything he needed, said the people who served him in the last years of his life. It was an easy drive to New York City and the publishing houses that printed Nixon’s books on diplomacy. Even more than today, those communities were Republican strongholds where the people in the street were likely to be friendly admirers, not still-angry opponents.

Bergen County also fit the emotional needs of this uniquely private public man. In Bergen County, he could engage the public on his own terms, welcoming people into his life and his home — but always from a reserved distance.

“He was pleasant, and he shook all the kids’ hands,” recalled Louellen Kaiser, 54, who took her two children in the early 1990s. “But he was always a politician.”

Parisi remembered that Nixon liked to rib him about the barber’s arduous trips to Florida, but he never felt relaxed in Nixon’s presence.

“I have CEOs in here all the time. This was different,” Parisi said. “There was always an electricity when Nixon was coming.”

Robert Re led Nixon’s security detail the last seven years of his life. Sometimes Nixon rode in the backseat, silently reading the newspaper. Other times he was in a gregarious mood and would sit up front and regale his bodyguards with stories and insights into the world of power.

“When I say that Richard Nixon was an informal, warm, compassionate man who was sensitive to the people around him, some people think I’m crazy,” Re said. “But that was the Richard Nixon that I knew.”